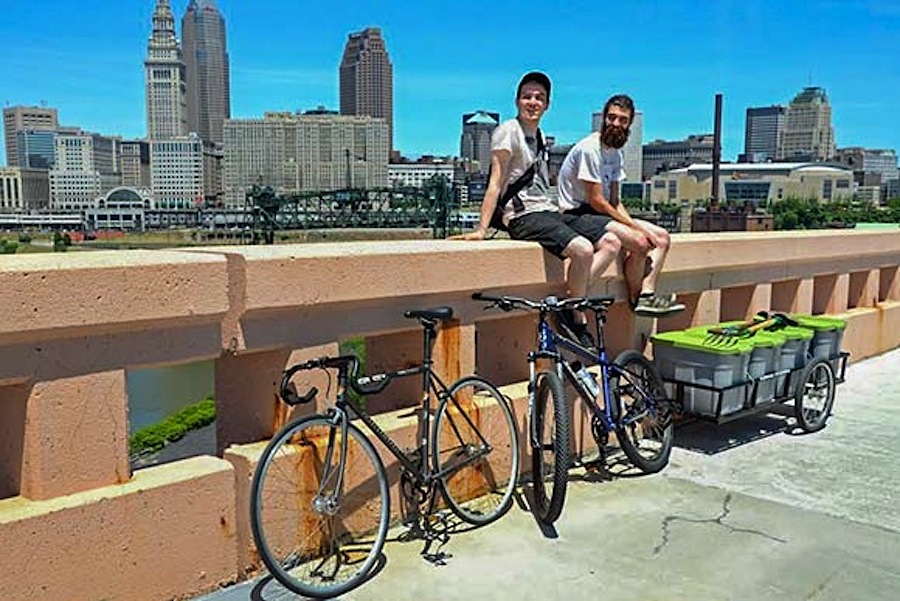 Daniel Brown is co-founder of Rust Belt Riders Composting, a worker-owned, bike-based, organic waste removal company in Cleveland. Here, he shares the story of how the Riders got their start, how cooperatives create a new framework for communities, and how rust belt cities are imbued with a changing, yet unbroken, spirit.

I grew up in fly-over country. We aren’t rural per say, but our cities aren’t huge either. The farmlands are a 30 minute drive away—in any direction. I like it like this. I grew up in Cleveland, learned who I was in Chicago, and got myself back to Cleveland shortly thereafter.

I’ve learned that I love cities like Cleveland. Cities I have never even been to I feel a deep connection to: Detroit, Buffalo, Minneapolis. These are the cities the nation forgot and, regrettably, this has, all too often, become the narrative that plays out nationally. If you take a deeper look, however, you begin to see growth in unsuspecting places, innovation that places people before financial gain, and a badly wounded, but unbroken, spirit.

In Chicago, I figured out what mattered to me. In the midst of the great recession I watched from a distance as zip codes I had come to know became ground zero for the foreclosure crisis: predatory lending, greed, too-big-to-fail, nonsense, nonsense, nonsense.

I grew tired of complaining and pointing out the all-too-obvious shortcomings of existing systems that somehow continue to fail us and yet we continue to place our hopes, our energy, and our faith in them. I wanted to explore what types of systems could be created, replicated, duplicated, and manipulated to make communities less vulnerable to the increasingly chaotic ebb and flow of various market forces.

I learned about Growing Power in Milwaukee, and the Evergreen Cooperatives in Cleveland. I became captivated by the work of W.A.G.E.S. (now Prospera) and The Working World. In them I saw a blueprint, a framework, and instead of bickering over how systems became broken, they were rebuilding new ones in the shell of the old. 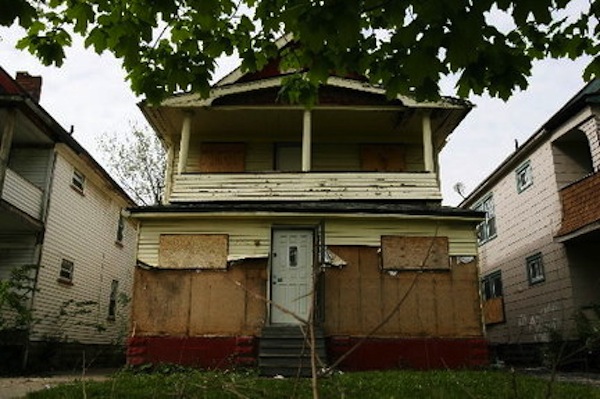 One of over 20,000 vacant or abandoned homes in Cleveland.

I’m not suggesting that the 20,000 vacant parcels that are dotted across Cleveland’s landscape are in anyway a blessing in disguise; these were once homes, businesses, and places where families were raised, meals were shared, and people learned things. These are sacred spaces. I figured, as many others did, that we need to honor that legacy and history by making it something more than an illegal dumping ground.

People started gardening on neighboring vacant lots in Cleveland long before urban agriculture became fashionable. Folks were supplementing their income by reclaiming land that the banks forgot about, that the city forgot about, and frankly, that most people forgot about. Today Cleveland boasts over 200 community gardens. I am proud to say I get to work with a handful of them in a unique way.

After running a own community garden for about three years, a group of us had varying degrees of success. But the soil we were working with used to have a factory that made bombs during World War II on it. It was in terrible condition. It passed EPA soil testing but it was so compacted that you couldn’t plant root vegetables of any kind and every time it rained, the topsoil would just shift, and shift, and shift, until most of it was washed away into the street, into the sewer, and out to the lake.

We started composting and realized there was a real need for soil remediation and access among community gardeners. While there are a handful of market-gardens that employ folks, most people are pouring their personal money into these projects, buying things like compost. If they aren’t buying it, they are going after grant money to buy it. We saw this and realized it was madness to talk about sustainability without operating a financially sustainable operation, no matter how well intentioned our efforts may have been. 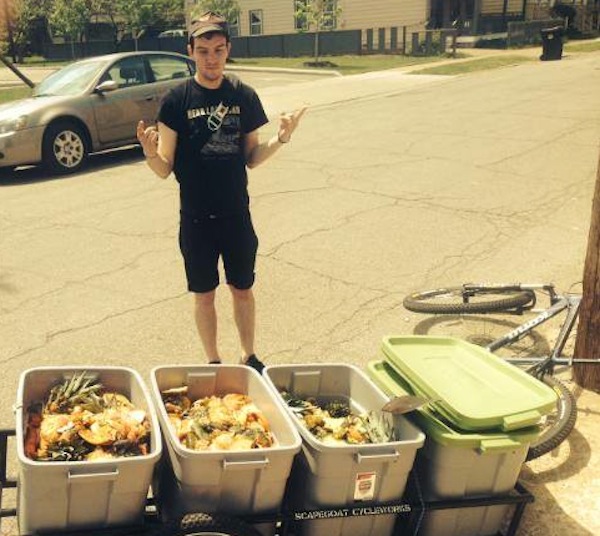 In June of 2014, we started Rust Belt Riders Composting, a worker-owned, bike-based, organic waste removal company. We thought we had struck gold, that we had come up with a novel idea. We started doing our due diligence and learned that we weren’t quite as smart as we fancied ourselves. We learned about Pedal People, Bootstrap Compost, East Side Compost Peddlers, Gainesville Compost, and the one that puts us all to shame: Carters Compost.

Rust Belt Riders operates at the intersection of two of the most inefficient industries that exist: the food industry and the waste removal industry. Both have practices that are outdated, exist to the exclusion of many communities, and are wildly unsustainable. Their inefficiency has real-world harm, be it hunger or water/air/soil contamination. Household waste is 30 percent compostable, business and restaurant waste is 50 percent or more compostable, and school waste is almost 60 percent compostable. The way we get rid of waste is important and simply making mountains of garbage, with some 133 billion pounds of food, is no way to deal with it responsibly.

Rust Belt Riders collects residential, business, and school waste that can be composted. We do this on bike because many working people in Cleveland do not have access to a vehicle and it’s more efficient both from a cost- and time-saving perspective. By keeping the barrier to entry low we create opportunities for almost any able-bodied person. After we have the organic waste loaded onto the trailers that we cart around, we head to any number of gardens. There we help gardeners manage and maintain their compost piles. This way they don’t have to waste time, money, or energy getting a much needed commodity because their system has now become supported. Systems like this shouldn’t have to fight for scraps. 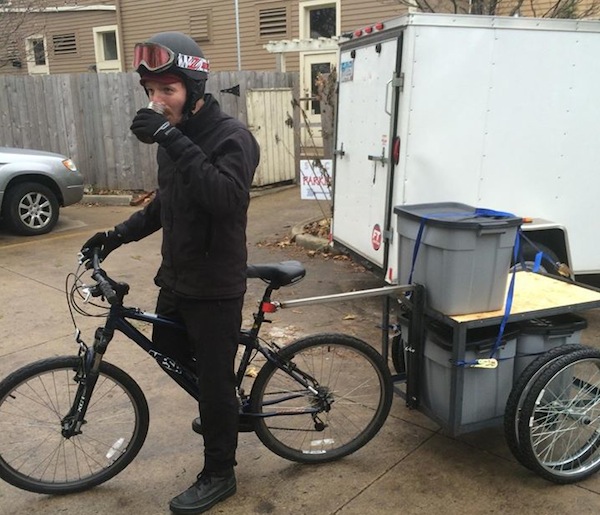 Even in the winter, the Rust Belt Riders ride.

As an organization, Rust Belt Riders is compensated by the residents, schools, and businesses we collect from. We fill their need of getting trash out the door, only we do it better than anyone else does, or can do. We connect restaurants to their community and we can help students understand the half-life of a banana peel or microbial biology. The possibilities are vast!

When we succeed we save the city money, make landfills less awful, support local food systems, and prove you can run a business on a bicycle.

Our ambitions as a company are not limited to merely running a successful operation—we are doing that. We intend to use whatever financial profits we generate, however close or distant they may be, to invest, support, and foster the birth of new cooperative businesses in and around Cleveland. 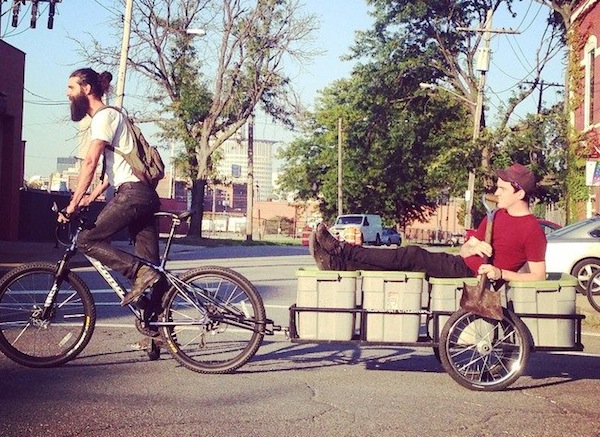 If you believe in this vision and want to see workers claim ownership of their labor and have an equal seat at the table, work with us—virtually, physically or otherwise. We need your help. This is no small feat, and we are not working in isolation. We exist to support healthy, sustainable, and self-sufficient communities where ownership is a given, not something that is fought for tooth and nail.

We want to see dozens of companies like ours across the region; companies that create wealth for those who currently toil for meager hourly wages. We want a paradigmatic shift in how work is viewed, what employment means, and how we create systems where we all can support and empower one another.

Daniel Brown is one of the founders of Rust Belt Riders Composting, a worker-owner, bike-based organic waste removal solution that serves businesses, residents and schools. While not working on RBR

Daniel Brown is one of the founders of Rust Belt Riders Composting, a worker-owner, bike-based organic waste removal solution that serves businesses, residents and schools. While not working on RBR you can find Daniel playing pinball, cooking, and working as the Economic Opportunity Fellow at Cleveland Neighborhood Progress.

Things I share: Time, tools, food scraps, energy, passion, knowledge, and whatever else I have in excess.