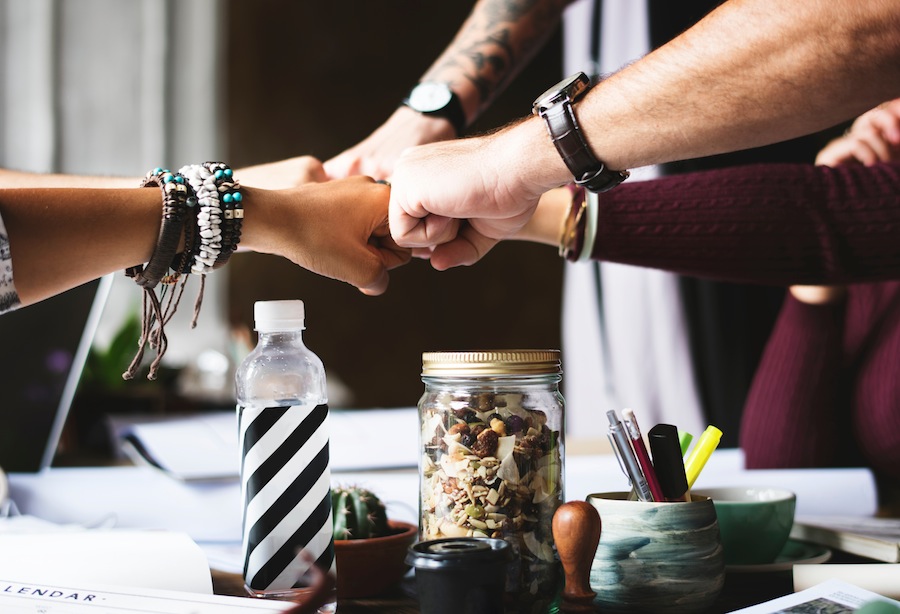 My son Jake was born on Dec. 20, 2009. He was premature. He weighed less than five pounds. When my wife's maternity leave ran out five months later, we had to arrange childcare because we both worked. We had three choices:

We couldn't bring ourselves to drop off our tiny baby with strangers every day.  But we couldn't afford a nanny either. We decided to share a nanny instead. We found Wilma, a kind and dedicated nanny, and two families to share her services with. Every day Kayla and Taryn's parents would drop them at our house, and soon it was like Jake had two sisters.

Not long after that, all the parents became friends. We organized monthly potlucks.  And we took turns babysitting on weekend nights so parents could have date nights. The nanny share turned out to be one of the most successful collaborations any of us have ever experienced.

Working together, we turned a difficult situation in a big win for everyone involved. This was a profound experience of commoning, the act of living in a commons. I want to share three similar examples of how citizens, when faced with a big challenge like we were, chose commoning and not only succeeded, but further developed their collaborative capacity ensuring they could better meet future challenges.

It's this latter point that's often overlooked. The governance of the commons is all too often seen as merely a means to an end. That's unfortunate as the long-term result of commons-based resource management is the development of the individual and collective potential of human beings that can put a whole city on a centuries-long spree of human flourishing. Whether or not a collaborative service can contribute to a social process that produces wise, loving, and cooperative individuals and communities is the gold standard by which they should be judged.

In 1994, Sungmisan, a neighborhood in Seoul of about 700 families, was forged into a community by their successful fight to save a nearby forest from development. They leveraged that civic energy to create commons-based services for the neighborhood:

In 2004, they took things to the next level by starting Sungmisan Village School, an alternative to traditional public school education that emphasizes peer learning.  Alongside traditional topics, students learn organic farming, pottery, and other skills from community members, many of them elders. Principal Park Bok Sun describes the impact on the community:

"The villagers feel that the school is their school because they are involved. Children know all teachers well. It's not just about learning information. They can see how a potter makes pottery, exhibits, sells and does bookkeeping. Imagine what a vivid example it is! The teacher isn’t someone who just comes to class, teaches few things then runs away to his home and no one knows where the teacher lives."

The success of Sungmisan Village has inspired numerous urban villages in Seoul.  The city government now actively supports the development of urban villages through the Seoul Community Support Center.

In 2006, Jessy Kate Schingler and four young engineers landed jobs at NASA in Silicon Valley. Instead of opting for cheaper housing with a long commute in one of the most expensive housing markets in the U.S., they rented a large house nearby and started the first coliving community, Rainbow Mansion. They discovered there was a glut of mansions in the area. They saw a way to create a better quality of life at a lower cost by sharing a mansion, but what was most important to them was growing as people. So, they created an environment to accelerate their personal and professional development through collaboration. In addition to sharing rent, utilities, cars, and food, they began supporting each others' professional projects including startups. They also sought out other people who were interested in changing the world for the better. They hosted workshops and events to learn and network beyond the four walls of their home. They often kept one or two rooms open so young innovators from other countries could visit.

Jessy took this one step further by creating Embassy, a network of coliving houses that give tenants access to many communities.  She describes this lifestyle as, "one rent, many locations." Others have followed her lead, and the coliving movement grows as young workers have a great need for affordable housing, meaningful friendships, and professional development. My friend Chelsea Rustrum says of the coliving experience:

“"ou develop deeper, more real relationships and have the potential to actually work together, actually help each other. Not just in professional ways but in personal ways also."

The first senior village began in Boston's Beacon Hill neighborhood in 2001 when about a dozen elders wanted to avoid going to a nursing home. They founded a nonprofit to co-purchase the services retirement communities provide, but get them where they already live. They became the first "virtual retirement community" offering services such as transportation, food delivery, home repairs, dog walking, and social activities. After four years of successful operation, The New York Times published a feature story about Beacon Hill Village. The idea began to spread.

To support those who were interested in following their example, Beacon Hill Village published a how to manual and began helping other elders set up villages. Eventually, the Village to Village Network was formed to launch these villages. Today there are over 200 villages around the world with more than 150 forming.

"People are excited and want to move to where villages are, I think villages benefit the whole person; mind, body and soul. As we educate the federal government on how well it’s working, we’ll start seeing even more."

In closing, I want to riff off the Zulu proverb – a person is a person through other people. I believe it takes commoning to create citizens, but not just occasional commoning, the day-to-day varieties I've just shared with you. It takes commoning to raise a child. It takes commoning for young adults find their way. It takes commoning for elders to live out their golden years with dignity. It takes commoning to become a fully realized human being at each stage of the cycle of life. We can be the most caring kids, adults, and elders through commoning.  We can be the best citizens too because a person who has experience with governing a commons will have learned the habits of citizenship. Furthermore, the collaboration we do today often leads to new, even more beneficial collaboration in the future as all the above examples show. So let's not forget that while governance of the commons is a powerful means to the end of provisioning our lives, it's also vital to developing our collaborative capacity has human beings — arguably the source of all true wealth.

This piece will run in the upcoming book, "Commons — Other Economies Are Possible"  (Spanish: "Comunes, Otras economías son posibles") published by Encuentro Comunes.

Header image by rawpixel via unsplash