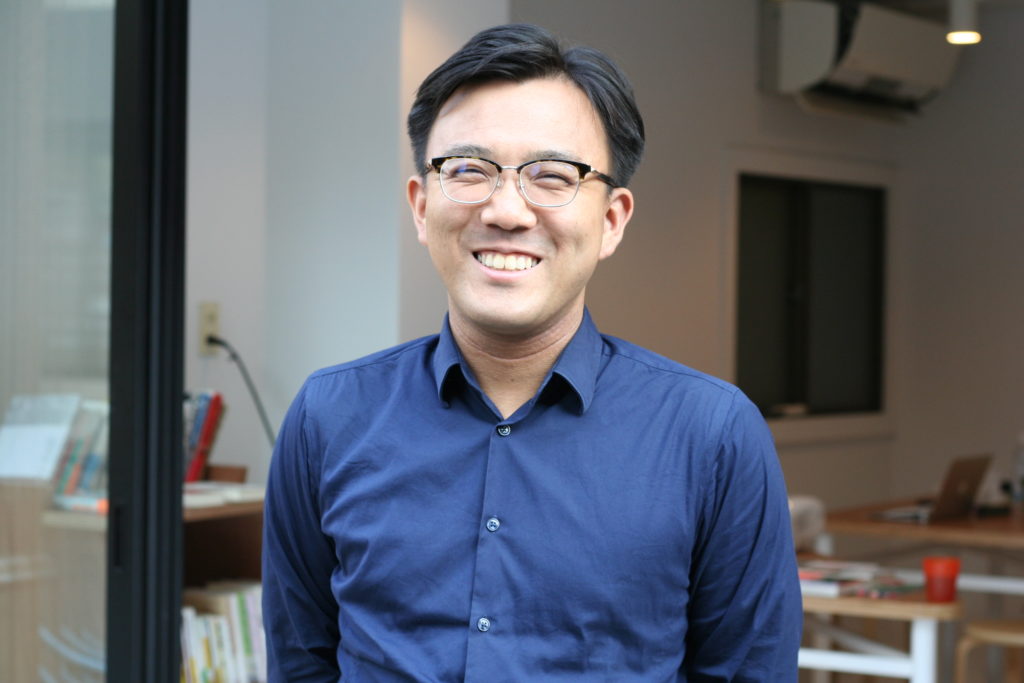 Egushi Shintaro is a researcher, author, and organizer, focusing on urban policy, rural revitalization, and civic economy projects. Originally from Fukuoka prefecture in the southern Japanese island of Kyushu, Shintaro is now based in Tokyo. He is a regular contributor to Forbes Japan and has published four books, the most recent of which he co-authored "Civic Economy in Japan," which was released in 2016 and involved extensive field work across the country. Shintaro is also the founder of TokyoBeta, an editorial design firm that focuses urban policy, regional revitalization, concept design, and prototype development and research. Shintaro's work often touches on the urban and rural challenges Japan is facing. We spoke with Shintaro to learn more about his research, the current social challenges Japan is facing, and the most innovative civic sharing projects in the country today.

Nithin Coca, Shareable: So what does the concept civic economy mean to you?

Eguchi Shintaro, co-author of "Civic Economy in Japan": It is based on the real meaning of "economy." If you look at the etymology of the Greek word, it represents a community that actually is sustainable and generates and regenerates what it has from its resources.

Civic economy is basically where individuals share what they have — skills, knowledge, services — to develop the economy of a certain area. The original meaning is basically a community of cooperation… a community that is sustainable, that generates its own resources.

Can you tell me about the history of sharing or civic economy in Japan? What is the underpinning of sharing in Japanese society?

In Edo era, there were ideas and functions that were held by small organizations that were early version of banks. This is where people in communities pitch in and pool money to invest, and have that money held in cases. For example, [if] someone had a fire and lost everything, they might loan that money for them to rebuilt their lives. Or sometimes, they would give that money. This is a system of mutual help, beginning of cooperativism in Japan. Because it is related to civil economy, I am recently getting more interested in cooperativism.

Then, the sense of commons was stronger than sharing. For instance in a village, there might be a well that a community uses together, or cooperative housing, or families taking care of each other’s children. Within that small community, it was complete. From our perspective, it is sharing, but at that time, the sense of personal ownership was not so strong. It was much stronger to have a sense of commons.

What happened to these systems?

After the Meiji Restoration, Japan went through modernization. This meant the sense of capitalism and individualism has gotten stronger, so there is a sense of having individual resources. That’s why individuals and family unit has gotten much stronger. The idea of capitalism meant companies promoted the sales of appliances, and meant household owned things, and that's when the idea of personal ownership was introduced.

What about the growing attention on rural economies in Japan. Can sharing help revitalize those economies?

During Japan's bubble economy era, the economy boomed, and major cities became bigger and bigger, and basically have extracted from rural areas, which have declined in population and their economies declined too.

Today, the population is still declining in rural areas, and that's why there are very few businesses willing to move to rural areas, and in rural areas they don't see any venture capital. Young people are leaving these areas to look for jobs in big cities, and then they make money and send some money back. Gradually, rural area is becoming more elderly, and there is more aging population.

There is a danger of small towns or small cities maybe disappearing entirely. As far as local governments go, they need to stabilize their economy. And so, within the community, they have few resources, which are getting fewer and fewer. In rural areas … local governments haven't put many efforts in building more entrepreneurs in their areas, so the sharing economy is one way for rural governments to create and generate funds for their own communities.

What is behind the more recent resurgence in interest in sharing or civic economy in Japan?

The Great Kobe Earthquake, and other disasters in Japan were important milestones. When there is a huge natural or social disaster, people learned that it was impossible to sustain or survive all on their own. That's when the idea of mutual help was reintroduced and got stronger. Along with that, the Japanese economy stagnated, so this is when the idea of cooperation re-emerged.

The Great East Japan Earthquake is also an important point when the idea of mutual help got stronger. In other countries, there is a strong interest in cooperativism, and in Japan, there is a need to review and look at cooperativism again. Of course the basis of that is because it is very democratic. It's not from the point of view of the study of the economy, it is also from how you can democratically operate,so it's important to study it.

Can you tell me about civic economy projects that are representative of the potential for sharing to revitalize the economy?

One example is a Toyo-oka, Kinosaki Onsen in Hyogo Prefecture. It is a hot springs (onsen) town. It's a very famous town because there is a novel written by a famous Japanese author, about 100 years ago. They rely on tourism.

In the past few years, there is a movement to create some projects to keep culture and people in the city. The project is launched by the local government, with one project, Books in Onsen started by onsen inn owners who had a union already. It's like an Artists in Residence program, they invite artists to stay in this area and create something. In exchange for free residence, artists are supposed to open their studios, when they are rehearsing or creating, to residents, so they can come and watch what they do. Or they have to provide workshops for children. Kids can also use these facilities to create their own pieces of art. … For local residents, they see in the books and stories names of places that are very familiar to them, so in that way, it's promoting literature, creation, and it supports tourism, because of the fans who want to come and get these books. They have already sold 100,000 copies. And many Japanese media have picked up these stories too.

Another example is Hagiso, in the eastern part of Tokyo, an area which has a lot of old buildings. It's a building which used to be an apartment and which is 60 years old that was renovated to have a cafe, gallery, and shop.

In this neighborhood, Hagiso is in the middle and functions as a front desk, and you might have lodging in an old Japanese farmhouse, where you can stay. For bath, they will give a ticket to another facility which is a hot spring bath. If they want to eat dinner, they will get a list of restaurants in the neighborhood for them to pick. They can rent a bike. Since this is an old neighborhood, we have facilities where they have cultural experiences like a tea ceremony. So this is a system that was created in the neighborhood, and economy itself it pulls and is shared by institutions in the neighborhood. Small businesses getting together to mutually generate business and help create and sustain the local economy.

What do you see as the future for sharing?

There have been a lot of efforts to increase start-up companies, or educate entrepreneurs in local areas, starting in the late 2000s. Amidst that, there are sharing businesses build on sharing economy concepts, particularly using IT. This is chance, to see how IT technology can be used to help society. But of course, that does not mean that IT literacy is increasing among older age bracket. There is a need for us to increase the IT use among this age bracket.

There is little understanding of sharing among local governments. Cities need to develop this vision. Citizens, private sector, and governments all have to come together, and work in the same direction, with the same goals. We don't have that yet — they are divided, and working separately. The people have not really felt or understood the Sharing City vision.

One of the biggest things right now is to help these groups understand each other and face the same direction — need to create something that people and the local government that can make their own city attractive, and build civic pride together.