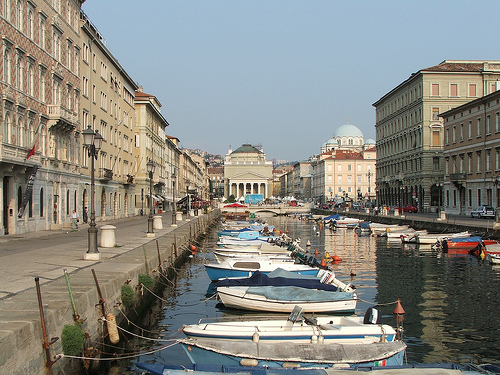 On a bright spring afternoon at a café on a piazza in the Italian city of Trieste, it felt like I had landed in the center of the universe.

But why I wondered? I was just passing through, and there seemed no reason Trieste should make such a strong impression. It’s a smallish city the same size as Boise (Idaho), as remote from Tuscany or Rome as you can get, and even farther from its own glory days as a legendarily cosmopolitan outpost of the Austro-Hungarian Empire.

But in Trieste you quickly succumb to an infectious strain of local pride–passed on by the hotel clerk who seems thrilled to point out sights on a tourist map, by families who take such deliberate pleasure strolling the streets, even by the café waiter who seems far more interested in surveying the scene than taking your order.

Their civic chauvinism is perhaps justified by the striking geography of the city–green hills dramatically rise from the blue waters of the Adriatic Sea– and its handsome architecture. But Trieste’s greatest asset is its belief in itself.

The great travel writer Jan Morris devoted an entire book to the place, Trieste and the Meaning of Nowhere (2001), and summed up its appeal in a word: municipalismo, which she defined as “a conscious sense of separateness.”

Every city might learn something from Trieste’s municipalismo, especially in these rough times when many places are in danger of being abandoned by the global economy and losing confidence in themselves.

Trieste faced similar oblivion when it became part of Italy after World War I. Its entire purpose as a city was in being the chief seaport of a largely landlocked empire. That meant it had to scramble after joining a nation composed almost entirely of seacoast.

But Trieste never lost faith in its own unique qualities, and today the city still shines as a prosperous, satisfied testament to its own self-esteem. Its economy is now based in large part on scientific research.

Municipalismo is as simple as A-B-C-D, which is what the idea is called in the community organizing world: Assets Based Community Development.

Instead of focusing on all that’s going wrong, assess the real strengths of your neighborhood, town, city or region–and build on those. That means it’s less important to follow the playbook of other places deemed successful than to seek out innovations based on your own identity.

What’s already going on in your own corner of the world is more important to your future, than what’s happening in Silicon Valley, Shanghai or even Trieste.