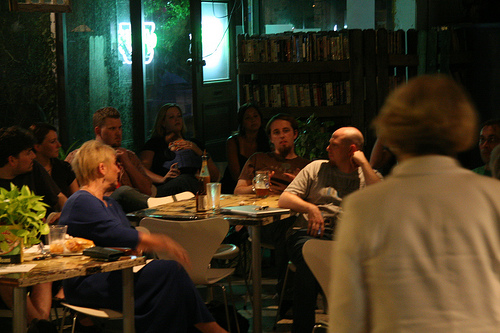 One of my many pleasures while living in Chicago was attending Cafe Scientifique, a series of science salons at The Map Room, one Chicago’s finest tippling establishments. For an hour, a respected scientist from the Chicago community presented an overview of their subject of study, ranging from topics as varied as astrophysics and neurobiology, in front of a packed room of imbibers. After a short break to refill pints, the audience reconvened for a question and answer session with the speaker. It’s a clever trick: come for the beer, stay for the scientific enlightenment and fascinating chatter. There’s something refreshingly egalitarian about an effort to bring smart science talk to the public house.

As quackery and pseudoscience dominate the news cycle and ideologues misrepresent scientific fact for political gain, proponents of credible, peer-reviewed science are in need of more clever ways to engage the populace. A 2007 Michigan State University stated that only 28% of the population demonstrated basic scientific literacy. Thanks to the web and innovative projects like NPR’s RadioLab and the ScienceBlogs network, credible scientific journalism and blogging are enjoying a renaissance, but people have to seek that out, and there remains a barrier to entry for people who feel ignorant of, or confused by, basic scientific concepts. But a casual talk at a bar is an eminently accessible venue, a venue where folks from all sorts of backgrounds–lawyers and web developers, novelists and baristas–can drink off a bit of the science jitters left over from Biology 101 and learn a lot about contemporary research in a couple of hours.

Inspired by philosopher Marc Sautet’s Cafe Philosophique concept, the first Cafe Scientifique was organized in 1998 in the UK. In the 13 years since then, cafes have sprung up in 42 cities in the UK, and can be found in 43 stateside urban metros including the Silicon Valley, Denver, Pittsburgh and Chicago. Not all of the chapters hold their events in bars: what’s most important, according to the mission statement, is providing “a place where, for the price of a cup of coffee or a glass of wine, anyone can come to explore the latest ideas in science and technology. Meetings have taken place in cafes, bars, restaurants and even theatres, but always outside a traditional academic context.” For the underage, a number of Junior Cafe Scientifiques have sprung up in high schools.

The Cafe Scientifique hub site has listings of the chapters around the world (though the city listings aren’t always kept up to date; it’s worth checking Google to see whether the venue has changed and when the next event is.) And if there isn’t a Cafe Scientfique in your town, you can change that. Cafe Scientifique is gloriously DIY, and guidelines and resources for starting your own can be found on the site.