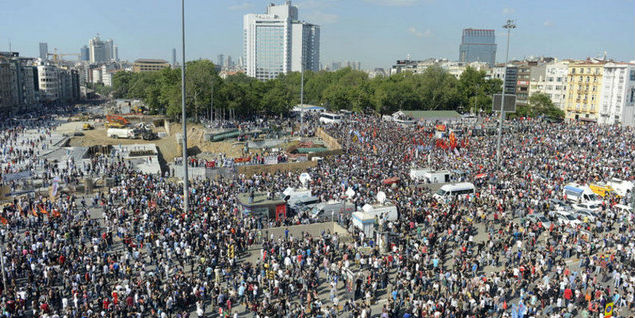 The first week of massive protests that are shaking Turkey to its core is coming to an end, but the protests are anything but ending. The myriad scenes of all of Istanbul (all of Turkey, even), across age, class and ethnicity unified to build barricades in the street evoke The Paris Commune as much as the occupy protests to which they have been often compared.

If you haven’t heard much about the ongoing Turkish revolution, it wouldn’t be surprising—the media has been largely quiet on the story, although its quickly developing to a point where they can’t ignore it anymore—I’d recommend reading this article as a starting point. There’s a lot to talk about, but I’d like to zoom in on the role that cities, and their uneven and un-democratic development, have played in this uprising.

The protests started a week ago when about 50-100 activists tried to stop the city from bulldozing Gezi Park (hence the hashtag #occupygezi). Gezi Park, in the center of Istanbul’s historic Taksim Square, was one of the last public and open green spaces left in Istanbul’s center. Prime Minister Tayyip Erdogan wanted to demolish the park, rebuild an old military barracks that had been on the site, and then turn those barracks into a shopping mall. The activists were hoping to stop the destruction of this last bit of green space, and were generally opposed to the neoliberal development strategies of the increasingly authoritarian Erdogan administration (also discussed by these protesters were plans to build a third bridge across the Bosphorous, which would result in the destruction of even more forest and park land and an increase in car traffic).

But when protesters tried to stop the bulldozers, police responded with extreme brutality, which inflamed the city. By Friday, hundreds of thousands in Istanbul were protesting: over the weekend, the protests spread to almost every city in Turkey. Thousands have been arrested and injured, and at least two people have been killed, as the police wantonly use tear gas, water cannons and other “less-lethal” riot control tactics. Indeed, in Taksim Square there was so much tear gas that one night protesters were able to project a photograph onto the clouds. 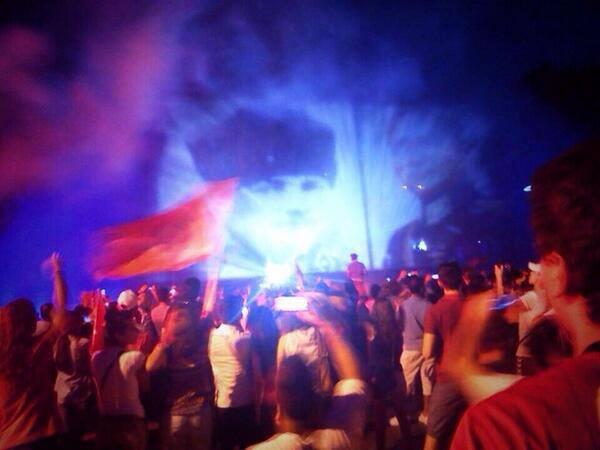 However, the protesters have succesfully taken Taksim square, which over the weekend was a battleground: the police have retreated, and it is now a liberated zone. The protests have taken a generally anti-Erdogan and anti-police tone, and show no signs of slowing down, with the possibility of a general strike being discussed by Turkey’s two largest labor unions.

But where did this come from? Erdogan is a democratically elected leader, and Turkey has been doing better throughout the crisis than many other European states, and has seen wide growth over the last decade. Though there is always an element of randomness with the spark that lights a revolutionary fire, it’s anything but irrelevant that this began as a fight over public space, development and management of the city.

The beautiful and devestating 2012 documentary, Ekumenopolis: A City Without Limits, embedded below, provides a context for what has been going on in Istanbul. Poor communities have been destroyed, and the workers are being pushed from the city that they built, in order to make space for the super wealthy and for tourists, focusing on consumption sites and activities for the leisure class. The drive to produce a mega-metropolis, a financial and consumption center that can become the engine of the Turkish economy, has meant destruction and devestation for many of the city’s residents.

When people have no say in the development of their city, when common spaces are destroyed and people are left powerless over their living environment, the fact that their leaders were democratically elected becomes insufficient, even irrelevant. Democracy is not about elections, and what we want from our cities is not primarily development, wealth or expansion. Common space, common experience and common control of the city is what actual democracy should look like, and, as our Turkish comrades are showing us so clearly and so bravely, the elected officials under a neoliberal regime will never give it to you. You have to take it.

Solidarity to all those fighting for the commons in Turkey.