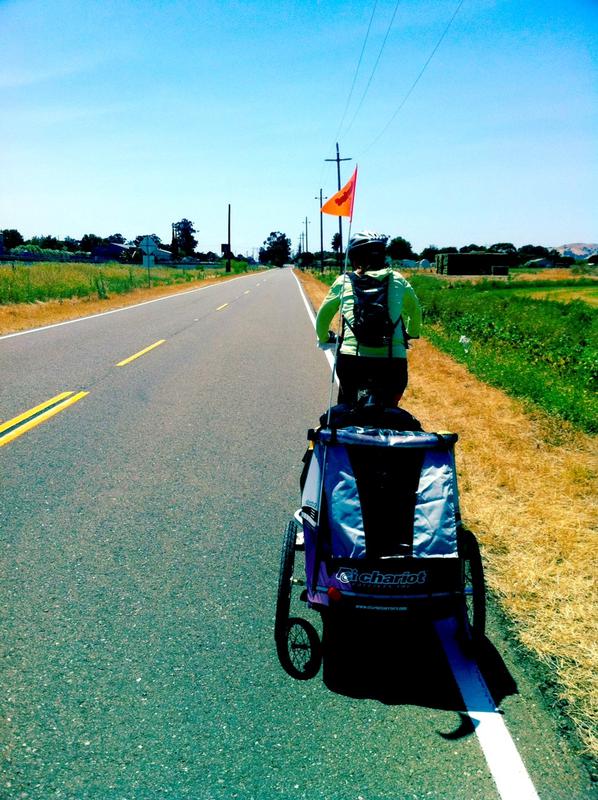 Corbyn Hightower decided to take a two day bike trip to a wedding with her friend K., both towing their kids behind them. This is part two of what happened.

We decided to take our time the next morning. We had thirty-seven miles to ride on that day, but the weather was cool and we wouldn’t be able to get access to the hotel until late afternoon, anyway. We couldn’t have predicted that the day would go so completely, horribly wrong, and that we wouldn’t arrive at our next resting spot until after seven that evening.

So with the bliss that ignorance brings, and with our thermoses full of local, organic, blessed by fairy dust Davis coffee, we set off for Fairfield. Pretty quickly out of town, we entered the kind of regimented pattern of grids that defines an agricultural landscape. We came upon a belching little factory that turned out to be a Campbell’s Tomato Soup tomato processing plant, and got lost right around there because we were trusting Google’s suggested bike route.

K.’s kids were bickering in her trailer. I rode behind her past the miles of cornfields, watching the boxing match from behind, fists poking the nylon sides and top. My little ones were docile but started asking “are we there yet?” alarmingly early in the ride. This part of the journey was comfortably flat, but time seemed to slow for everybody, and what felt like hours turned out to be less than one. We figured it was the barbaric wind that seemed to be pressing us backwards as we pedaled.

There was a sign ahead of us, we could see it from a distance, but until we got too close to make any sort of change, we read: PAVEMENT ENDS. Pavement *ends*?! This could be bad. We advanced with caution into what turned out to be thickly-laid gravel, that also had a wavelike pattern of crests and troughs, making it feel like we were biking through sand while also waterskiing over choppy waters. It was dispiriting. K. allowed one of her girls to stand and ride backwards, arms out–it was all she could do to gain respite from the shrieking and fisticuffs. And there was the wind, the wind.

K. informed me that we were only moving at five- to eight miles per hour. I was slow and steady, but K. was struggling. The gravel had a purplish-gray cast, and to either side were acres of obscenely large sunflowers, their heavy heads bowing with seeds. An opalescent turquoise dragonfly darted beside me and seemed to stay with me for awhile, and the sky was cloudless and still. The sun was bright but it wasn’t hot; this could be far worse, I thought aloud. K. struggled on, complaining in a way that was uncharacteristic. We reassured ourselves that with the absence of hills and traffic, this would be an easy ride once we were on pavement again. Well, if not for that wind.

We started running a little low on water, and everyone needed a pit stop. Like magic—magic, I tell you!—an oasis appeared in the form of Yoon Chao's Pick-Your-Own Strawberry Farm. They were in possession of the world’s cleanest porta-potty, and the door slammed open over and over as the wind took it. We bought everyone their own pint of strawberries (we didn't Pick Our Own,) and stayed there so long that the man at the farm stand looked out at us, confused. They didn’t have any water, which was curious. Not even a stray garden hose. The wind was so strong it took our words away before we could hear each other, so after a few shouted conversations we just took to being quiet. 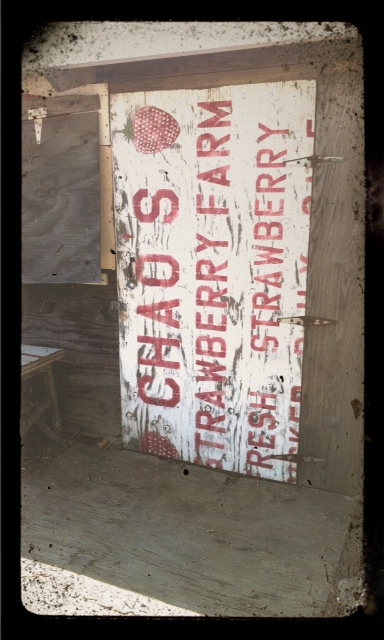 We set off again. We were now on asphalt, but our newest obstacle was a very narrow shoulder and a lot more traffic. Fast traffic. K. started to ease over onto the brush, and I followed her off-road as it seemed the only sane thing to do. I was struggling horribly now. Could the wind have gotten worse? Was our siesta at the strawberry patch too long? Something was wrong. I could barely move. My butt and thighs were screaming at the effort. And then I knew. I looked back and saw that one of my trailer wheels was flat. And then I saw that my front bike tire was flat as well. I shouted at K. just as she was shouting back at me; she had a flat, too.

There were a string of curse words issued forth by both of us that were lost in the wind and thusly, shan’t be printed here. It was when we investigated more closely that we realized exactly how completely hopeless the situation was. Apparently, when we made our small forays off-road, we encountered our new nemesis: the Star Thistle. Centaurea Solstitialis. It’s a beautiful plant in a modern, mid-century Sputnik sort of way, and certainly noticeable in the landscape but not necessarily recognized as the merciless adversary that it was. And each of our tires had several dozen of the spines deeply embedded, making tube repairs utterly impossible. The tires themselves would need replacing, even.

I would like to say that this trouble was a surprise, and it certainly was in terms of how it manifested, but I felt a sort of peaceful resignation that things had, indeed, gone horribly wrong. There must be a pessimist buried deep inside my blindly optimistic exterior, and anyway, people had said we were crazy to attempt this. So here it was, mission aborted halfway through. We made the appropriate cell phone calls, sent out distress signals, and settled in to wait for whatever form rescue might take. Only problem was, we were still on what had been the most dangerous section of the ride so far, and we had preschoolers who were restless. Cars zipped by with startling speed and disregard. We got a little panicky and decided we would try to walk our bikes the last eight miles, Star Thistle-be-damned. There was no happy solution, and there was the wind and the sun and water bottles that were reaching bottom.

I have never felt so patriotic as I did when a big ol’ honkin’ extended-cab pick up truck pulled up across the street, and an airman in battle camo got out and stood at parade rest, looking at us. Travis Air Force Base! I remembered gratefully, and I’m not ashamed to say I began to do jumping jacks in order to subtly transmit our S.O.S. He looped back around and parked in the shoulder. We barely made introductions, and we didn’t even offer him a way out of helping us. We were determined, and we managed to get both bikes and trailers into his truck bed, while we identified the closest bicycle repair place. 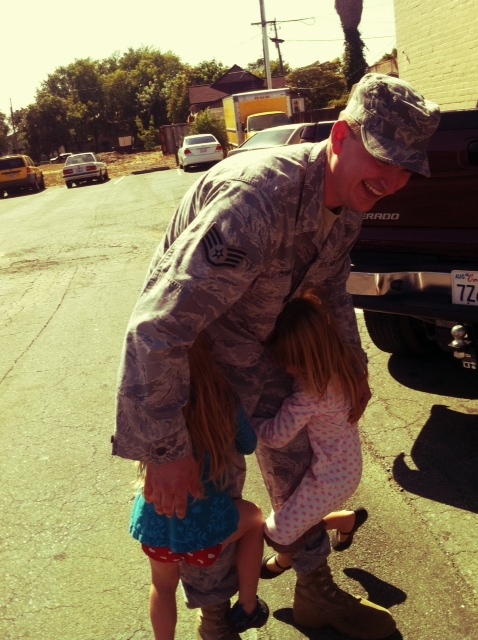 He stayed with us longer than he had to. Zeke whispered to me, “can you believe this isn’t a dream?” as he shyly eyed our rescuer from behind my thigh. The bike repair employees laughed and took pictures of our ravaged tires. We stayed there for hours, camped in the corner and eating Cliff Bars while we charged our phones. The kids sat on tables and watched the repairs being done. We washed wind-driven soot from our faces and chests, and started to see the other attack we had suffered: K. and I were horribly sunburned. It had been a long day under a big sky. The babes had all been shaded in their trailers, and yes we had used good zinc sunscreen, but didn’t repeat application. 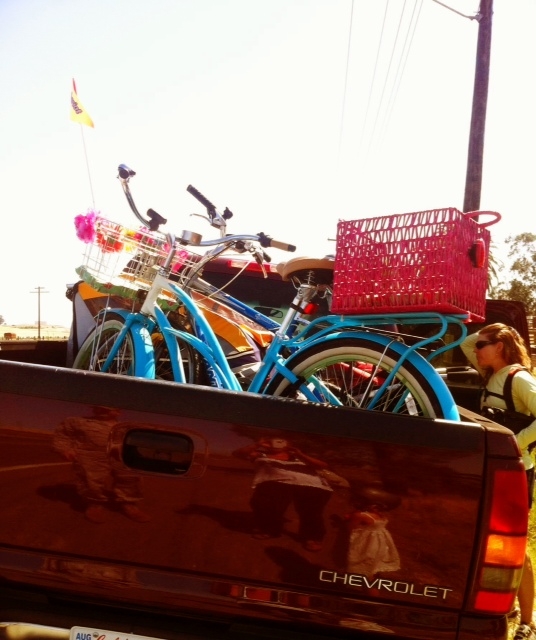 I don’t want to write the rest right now. Suffice to say, we had more hours of riding ahead of us. When we arrived at the hotel at near sunset, I think I can honestly say I had never been so happy to arrive anywhere, ever. We donned swimsuits and plunged our sorry selves into the frigid pool in the courtyard, and steam rose from our red shoulders. Oh–and the beds were rreally very good, and the room was twice the size as the one the previous night. We were in the middle of nowhere, and it felt fantastic to just be in those cool sheets. 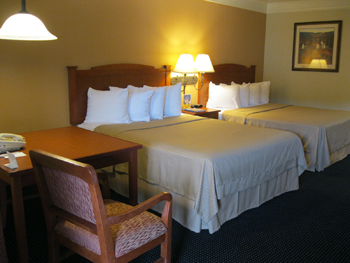 The take-home message for our day? Apparently, if you get assaulted by a hundred or so Star Thistles, they send the U.S. Air Force out to rescue you.

NEXT WEEK: I blog the last, suspense-filled chapter of The Ride! This one involves an altercation with an officer of the law, and also the practical instructions for getting out of bike clothes and into business formal wear while your hair is plastered to your neck in sweat..Oh–and all of this in a 4' x 4' public bathroom stall.