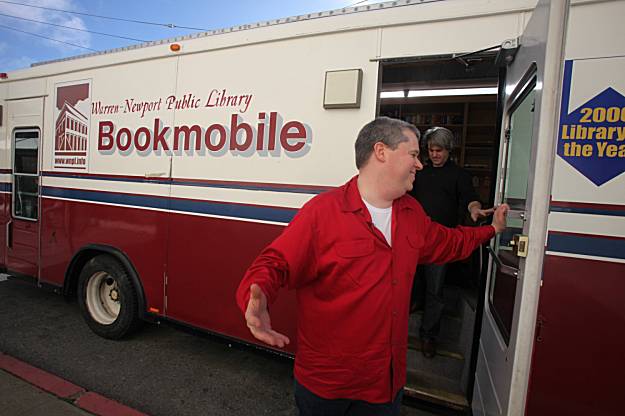 I don't know about you, but I remember bookmobiles as magical places–sort of like Doctor Who's TARDIS, bigger on the inside than the outside. Shareable contributor Regan McMahon wrote a fascinating piece for the San Francisco Chronicle about one filmmaker's quest to drive a bookmobile–purchased for $7,500–around the country interviewing his favorite authors about their favorite books.

"Along the way, he interviewed regular folks, from a waitress in Battle Mountain, Nev., who writes and performs cowboy poetry to an Army vet in Boulder, Colo., just returned from Afghanistan, who talked about how important books are to soldiers away from home," writes Regan. Corwin explains that his project is really "an opportunity for the authors and readers to connect on their common love of books."

He will also weave into the documentary the history of bookmobiles, which started in Maryland in the early 1900s and are still thriving all over the country. He stopped at the [American Libraries Association] Conference in Chicago before he rushed back to San Francisco for Litquake (festival co-director and author Jane Ganahl is a big supporter of Corwin's project), and interviewed the librarians who drove his bookmobile for 18 years. They described the magical relationship they had with their patrons as they exposed them to new things through literature. "I could see the sense of purpose they have in their jobs," says Corwin. "I think that will be a real powerful thread in the film."

Tom Corwin will document his travels on the project's website–we look forward to seeing it!