Can Walkable Urbanism Boost the Economy? - Shareable
Skip to content

Has the United States finally reached peak sprawl? Recent research, including a new study out of the George Washington University School of Business, suggests that the end of the era of automobile-oriented suburban growth is upon us. In Foot Traffic Ahead: Ranking Walkable Urbanism in America's Largest Metros [pdf], Christopher B. Leinberger and Patrick Lynch argue that current trends indicate a reorientation to high-density, multi-use development akin to—but not quite the inverse of—the mid-twentieth-century abandonment of the center city for the suburbs. Moreover, they suggest that a wholehearted embrace of walkable urban development would strengthen the American economy in addition to providing the less tangible benefits associated with living and working in walkable communities.

Leinberger and Lynch used data on office and retail space to rank the thirty largest United States metro areas according to their current and future levels of walkable urbanism. Their analysis revolves around "Walkable Urban Places" or "WalkUPs," which they define (based on methodology developed by the Brookings Institution [pdf]) as regionally-significant sites having at least 1.4 million square feet of office space and/or 340,000 square feet of retail space, plus a Walk Score of 70 or greater. Foot Traffic Ahead determined current rankings in terms of the share of office and retail space now located in WalkUPs. Future rankings were assigned based on a more complicated analysis involving office space absorption, office rent premiums, and the distribution of WalkUPs between center cities and suburbs. 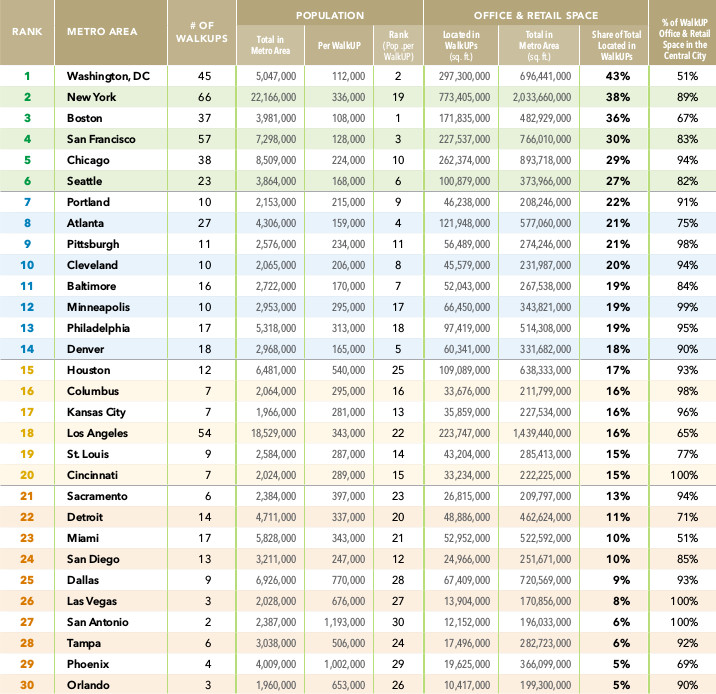 Washington, DC, New York, Boston, San Francisco, Chicago, and Seattle top the study's current index of walkable metro areas. That DC beat out New York, with 43% compared to 38% of office and retail space located in WalkUPs, comes as something as a surprise, given the Big Apple's reputation for high-density living. But, the report's authors point out, in New York—likewise Chicago—the vast majority of WalkUP office and retail space is located in the historic core. When the lens of analysis is expanded beyond the city center, DC's more balanced mix of urban and suburban WalkUPs results in a greater proportion of walkable commercial space. 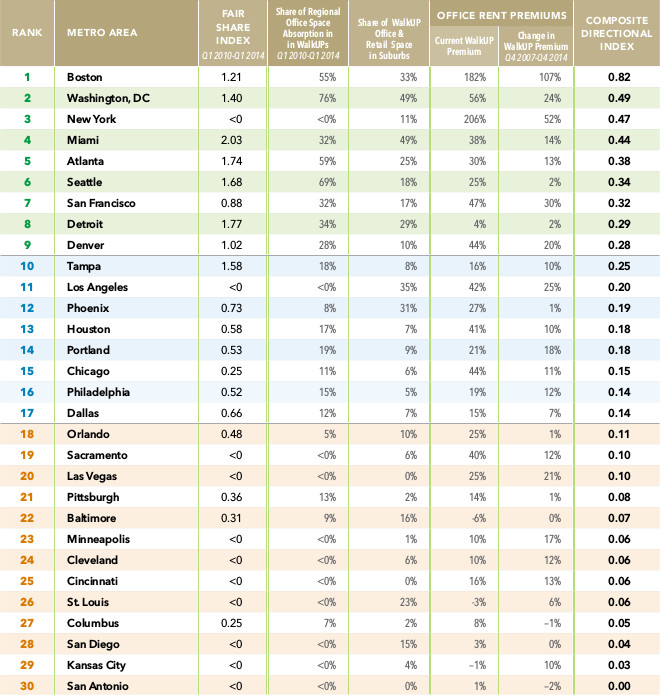 Foot Traffic Ahead's future rankings include some repeat winners: Boston, DC, New York, Seattle, and San Francisco all made it to the top level of expected walkable urbanism. The other four metro areas in the top tier—Miami, Atlanta, Detroit, and Denver—each climbed the index thanks to contemporary trends. In all of these regions except Detroit, office space located within WalkUPs demands a rent premium of at least 25 percent over offices within drivable suburban developments. In Detroit, a similar situation seems likely in the near future, as much of the investment in the city's recovery has focused on WalkUPs.

Of course, Leinberger and Lynch's future index is not set in stone. Based on data from metro regions in which WalkUPs are already prevalent, including Boston and DC, they estimate that millions of square feet of new WalkUP development will be required to satisfy demand for walkable office, retail, and residential space. Constructing WalkUPs on such a massive scale, they argue,  could provide the same long-lasting economic benefits delivered by suburban development (and its associated fields, including road construction, the automobile industry, and finance) last century. But to reap these rewards, federal, state, and local government actors and urban planners must embrace the extent to which walkable urbanism upends conventional planning practice, adjusting zoning regulations, financial tools, and infrastructure priorities accordingly. 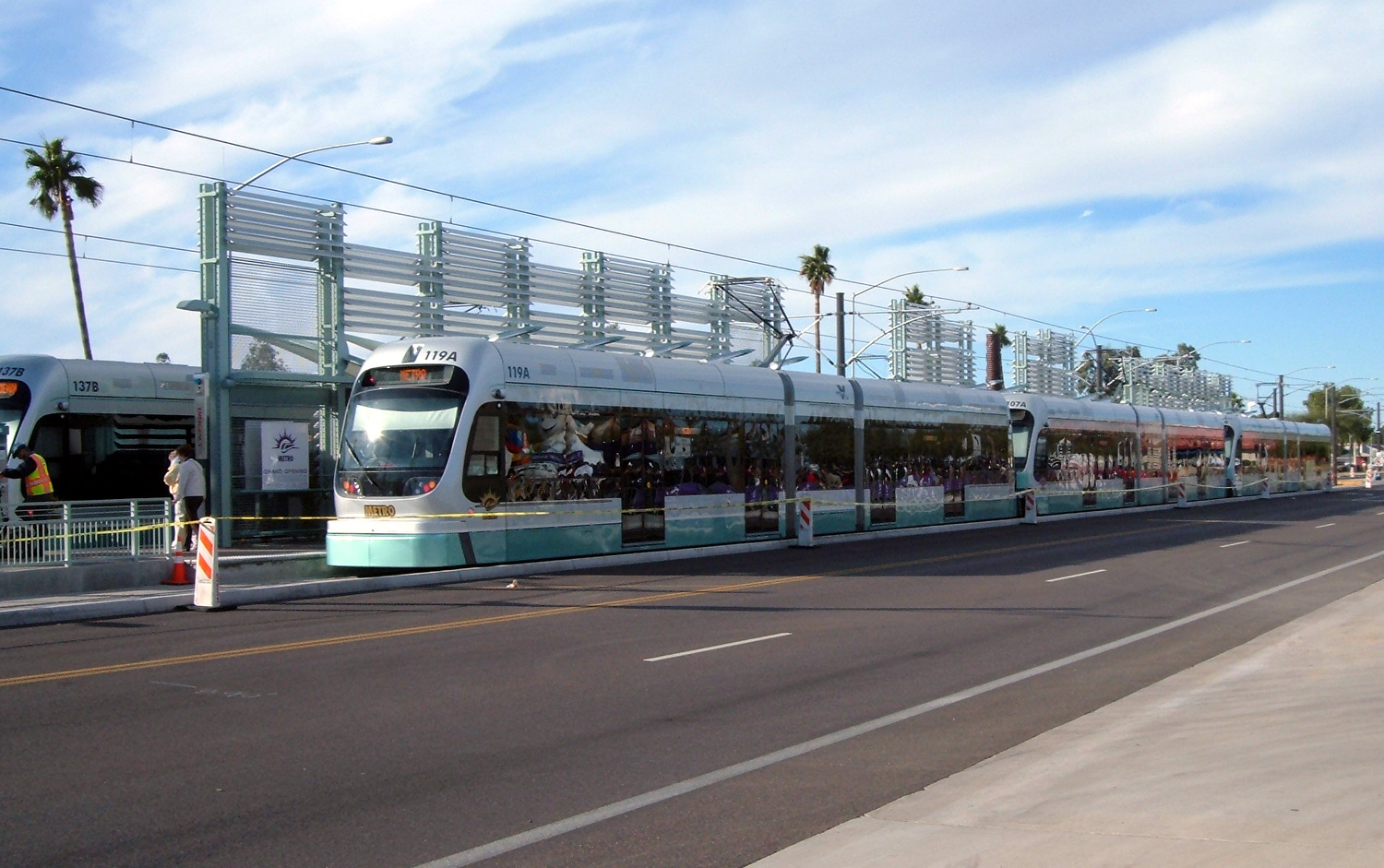 Mass transit, like Phoenix's METRO Light Rail, is key to bringing walkability to the suburbs. (Via Wikimedia Commons)

Foot Traffic Ahead also offers a second, and perhaps less obvious, lesson for would-be WalkUP developers. Leinberger and Lynch's research demonstrates the importance of the urban-suburban balance to achieving a high level of walkable urbanism on the regional scale. DC made it to the top of the current rankings list, and Boston rose above assumed front-runner Chicago, exactly because these two metro areas feature a more even balance of walkable development between their urban cores and suburban surrounds. (Only 51% percent of DC's WalkUP office and retail space is located in the center city; in Boston, 67%). To fully realize the opportunities offered by a pent-up demand for walkable places, developers must look outside the city proper. This, in turn, requires overcoming certain obstacles, including decrepit or nonexistent regional transit systems and suburban resistance to high-density development.

Foot Traffic Ahead convincingly demonstrates that, in many localities, "walkable urban" has replaced "drivable suburban" as the development model of choice for business owners, office workers, and shoppers. Yet it also makes clear that the end of sprawl is far from guaranteed. Rather than an absolute tipping point, the current moment appears to be one of opportunity. If seized, the opportunity to channel development energy into WalkUPs could have profound positive impacts beyond the everyday pleasures of living and working in dense, accessible neighborhoods. If ignored, the walkable-urban moment may well pass, and the replacement of the automobile suburb with a more sustainable, socially richer alternative will remain a distant goal.

Downtown Silver Spring, one of many suburban WalkUPs in the Washington, DC metro region. (The Peterson Cos. / Flickr)