Can Coworking and City Governments Partner? - Shareable
Skip to content 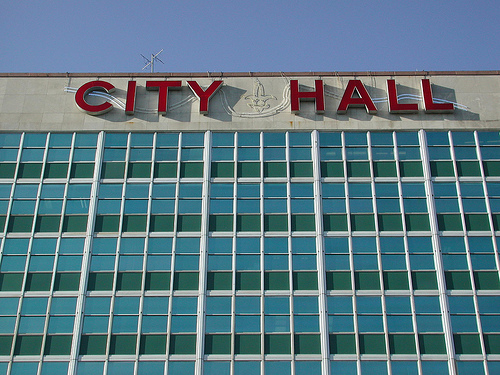 Coworking represents the future of work, and city governments are entrenched in the past. Despite their differences, the two often have similar goals for the larger community, and can sometimes benefit from collaboration.

NextSpace, a family of coworking spaces sprinkled throughout California, has had lots of positive experience working with local governments, but they did have a bit of an unfair advantage.

Although NextSpace doesn't receive funding directly from local government, it makes a point of reaching out to elected officials and economic development professionals in as it expands into other cities.

"NextSpace itself is a growing business and, in turn, we help other businesses start up, grow, and become successful." said Neuner. "In an otherwise down economy, NextSpace has presented a "good news" story and local governments could use some good news these days!"

Although NextSpace is a great example of successful collaboration between a coworking community and local government, there's reason to believe their experience is an exception rather than the rule.

David Garvin, a web designer from the UK, first learned about coworking in 2009. Unsure that his community was ready for coworking, he went looking for funding to help financially cushion the first year. After bouncing between a few different agencies, he was eventually contacted by a representative of the town council's arts and culture department.

"Once the connection was made, the work I had was in altering their vision and  widening the scope of the project," said Garvin. "This involved countless meetings, and meetings about having meetings."

According to Garvin, the problem was two-fold: First, the systems, processes and regulations that local governments need to follow restrict their ability to act quickly and decisively. Second, identifying a space that's both affordable and acceptable to both coworker and government officials can be tricky.

"It's worth remembering that a public body like a local government will most likely be required to fulfill stringent health and safety and accessibility regulations," said Garvin.  They are probably not going to cut any corners that would increase their liability."

Determining that both the end and the means of a government collaboration are aligned is essential, according to Brian Whipple of Incubation Works in Amarillo, Texas.

"Government facilities can stifle the entrepreneurial process if you dont choose the right place and have the right structure in place," cautions Whipple.

As you might infer from the name, Incubation Works is a government-funded business incubator that is currently in the process of opening its doors for coworking as well.

"Our whole goal is to drive the entrepreneurial spirit. We see the benefits of coworking, and therefore that is what we are doing," said Whipple. "The caveat, however, is that it might not always work. If you talk to some government entities, and they dont understand the main components that make up coworking; then get out. They have to understand that coworking is very unconventional. There won't always be metrics or graphs. The value is in the community of entrepreneurs. If the government entity doesn't get it, then all of what coworking is will be stifled."

Although managing the roles that both the owner/catalyst and government play in forming the community can be difficult, it's not always necessary. Sometimes, Angel Kwiatkowski of Cohere Community says, the government comes to you.

So is connecting coworking spaces and city governments more trouble than it's worth?

All of the coworking community members that shared their stories for this post advise proceeding with caution and keeping expectations in check.

If you're eager to take your space from idea to reality in less than a year, collaboration with government might be something to put off until you're open and operational.

"I would advise others that they seriously consider private financing before consulting with local government," said Garvin, who is now only one member of a steering committee that's still trying to find a home for the collaborative space. "You'll be faster, slicker and more responsive to your members needs. It's not really the people that I've been working with that are the problem, they're all great. I think it's more the culture,  processes, layers of management, and departmentalised structure of a large institution that strangles the entrepreneurial spirit."

If you've got the time and patience, working with local government could yield big benefits, both inside and outside the community. Just make sure you do your homework first.

"If a space owner wanted to talk to incubators or EDC's [economic development corporations], I would recommend starting the education process first," advised Whipple. "Contact government leaders that are already entrepreneurially minded, and show them what coworking is truly about. Work on your sales pitch. Find coworking success stories, and make it real to them. If you can sell them without compromising on coworking values, then I think it can be a beautiful thing."

Once the coworking catalyst has a clear vision for both the space and its partnership with local government, it's time to share that vision and find out if it jives with theirs.

"Coworking spaces are, and will continue to be, a cornerstone of local economies," said Neuner. "Among other things, coworking spaces provide a way for coworkers to work where they live. When people don't have to commute and can work where they live, they become more invested in their local communities. They shop at local retailers. They get engaged in local issues and make their voices heard.

"Most important, coworkers collectively provide a local economic anchor. Local governments are always trying to attract these anchors: big companies that will provide a broad base of long term employment, and local governments must often make unattractive compromises to woo them. At NextSpace, we're proud that instead of recruiting one 200-person company to downtown Santa Cruz, we recruited 200 one-person companies. This is a brand new model for economic development that we are busy replicating in cities throughout California."

What do you think? Can coworking spaces and local governments work together to create the cities and economy of the future? Tell us how.