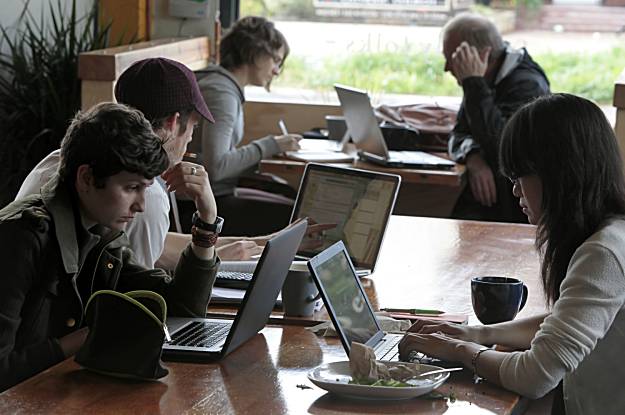 A North Oakland cafe is trying something revolutionary this weekend. It’s not fat-free croissants or half-price lattes.

The owner is asking customers to leave their laptops at home and actually speak to each other.

"When we opened this place we wanted to create a community. Instead it’s just been a room full of laptops," said Sal Bednarz, who opened Actual Cafe six weeks ago on San Pablo Avenue. "I don’t have anything against technology, but it’s not the same as looking someone in the eye and pressing the flesh."

From 8 a.m. today through 8 p.m. Sunday, patrons who flip open their laptops will be asked to unplug, sign off and log out. They’ll be encouraged to sit at communal tables and chat.

Customers, when pried away from their computer screens Friday afternoon, said they were thrilled at the idea. They said they’re tired of their laptops, iPods and cell phones, too.

"When I get away from the computer, it’s a relief," said Genevieve Walker, a graphic designer who often spends two or three hours in cafes tapping away on her laptop.

Dan Beyer, the only person at the cafe not with a laptop Friday, said he was looking forward to meeting his fellow cafe denizens.

"Laptops cut people off," said Beyer, an artist. "I think it forms a social divide. Technology’s great, but there’s a serious social impact."

Sounds like a great way to build a shareable social space (it also reminds me of our story about the Off the Waffle restaurant in Oregon).

So great that as soon as I read this story, I jumped on my laptop to share it with all you Shareable.net readers — and right at the moment I’m totally ignoring my wife and son, who are sitting on the bed reading the newspaper together. Here’s a picture (taken two minutes ago with my laptop, so pardon the quality, and also their dishevelment–we all just woke up): 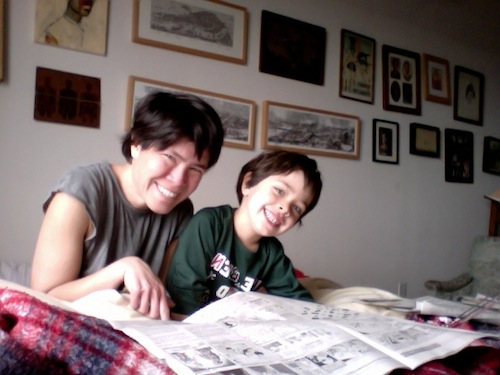 File under: "Cheap ironies of the twenty-first century."

But don’t worry: Right now, I’m going to close my laptop and go spend some quality time with these two cuties.