Building Resilience: The New Economy in the Shell of the Old - Shareable
Skip to content 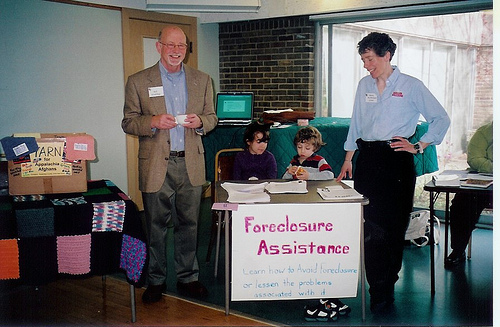 On a Thursday night around 6 p.m., people gathered for the fourth meeting of my Resilience Circle. We were in the social hall of the local Congregational Church, a big churchy room with folding tables and chairs. The meeting started with a potluck. The Clearys arrived with some pickles and olives they’d preserved themselves. In her softly unassuming way, Sarah Cleary began talking about how easy it is to can some of your own food.

Luka, the facilitator, called everyone together and kicked off the session with the exchanging of “Gifts and Needs.” Participants had written their gifts – things they could offer – on one set of note-cards and their needs on another. Luka himself started. “I can give bike tune-ups,” he said, placing a note card into the center of the circle. “And I’d love to learn how to hem my own pants.”

A few moments later, after two others also said that they’d like to learn to sew, Sharon offered to run a sewing class for the group. And moments after that, I was somehow scheduling a time for the pastor of the church to cut my hair, a skill she had learned around the edges of her divine pursuits. A dog-sitting/child-care exchange began to bud. People began brainstorming about how to find and share a 20-foot ladder. Lots of folks offered to help Sarah weed her garden in exchange for veggies. I asked her if she could help us organize a community-wide canning workshop. 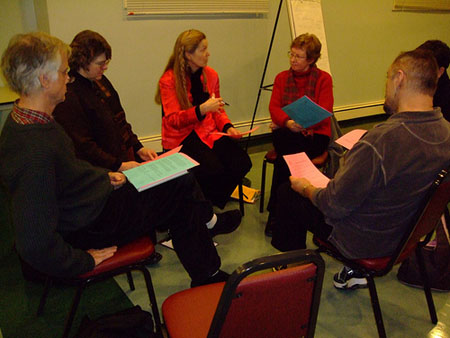 Exchanges like this are popping up in Resilience Circles around the country, sometimes known as common security clubs. We like to say we’re slowly “flexing our mutual aid muscles” since they’ve gotten so badly out of shape.

I began working as the Resilience Circle Organizer about six months ago, having just ended a job in a non-profit focused on policy change. At that job, we worked ruthlessly and relentlessly for financial reform and, ultimately, saw the passage of the Dodd-Frank Wall Street Reform and Consumer Protection Act. We were in the midst of the perfect opportunity to start creating a new economy through federal policy. Wall Street had just crashed our economy. There was widespread agreement that the banking sector should be reined in. What better moment to end the practices that drove us off the economic cliff?

But as most people know, this didn’t happen. The sad truth is that the new law takes some great steps, but doesn’t get the job done. Even sadder, funding for the agencies which are supposed to police Wall Street is now at risk. This could torpedo the reforms in one of those horrible off-the-radar moves that Washington is so good at. All this to say that attempting to do policy change as an organizer or regular activist is damn hard. It’s draining. How can we keep up our energy when it seems that no matter what we do, the rules always favor the rich and powerful at the expense of the rest of us?

For me, Resilience Circle organizing has been the perfect antidote to this sense of helplessness. With or without Washington on board, I now see that small groups of people can – and are – creating a new, shareable, and sustainable economy from the ground up. And in this time of overwhelming economic uncertainty, people are exploring a new kind of security based on community ties instead of the acquisition of stuff. 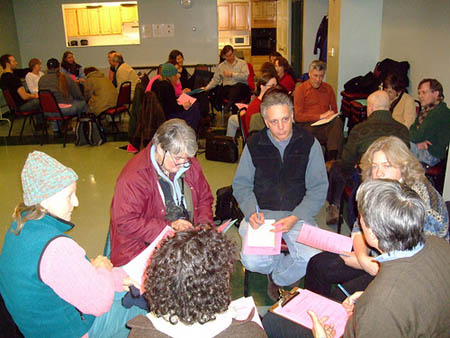 In Resilience Circles, we say three things need to happen to make a transition to a new economy: we need a new story about the economy that dismantles the myth of “recovery;” we need stronger communities; and we need new “rules” – i.e. new policies befitting a democracy instead of rule by a corporate elite. To make this happen, Resilience Circles learn together, engage in mutual aid, and take social action. A (free and open source!) curriculum provides a guide for facilitators to lead groups through six initial sessions. From there, groups pick their own projects and self-facilitate.

I now see clearly that connected communities are essential if we’re to beat the rich and powerful elite who keep the system rigged. No matter how many e-mails we send, isolated individuals calling for change can easily be ignored, whereas networked groups of committed citizens can get things done. And, community keeps us motivated and energized by showing us that we have lots to offer each other. Cheesy as it sounds, it shows us that we have lots to share, from hair cuts to veggies to a 20-foot ladder.

All of this is slowly unfolding in my Resilience Circle, and in the Circles I talk to around the country. It’s transformative, hopeful, and fun.

Get involved – start or join a Resilience Circle in your neighborhood. Visit our website for info.

Sarah Byrnes is the Economic Justice Organizer with the Project on Inequality and the Common Good at IPS. She is the organizer of the Common Security Club network, supporting clubs

Sarah Byrnes is the Economic Justice Organizer with the Project on Inequality and the Common Good at IPS. She is the organizer of the Common Security Club network, supporting clubs around the country who come together to learn, help each other, and engage in social action. Before coming to IPS, Sarah worked with Americans for Fairness in Lending, Americans for Financial Reform, the Center of Concern, and the Thomas Merton Center. She holds a BA from Boston College in philosophy and a Masters of Theological Studies from Harvard Divinity School.