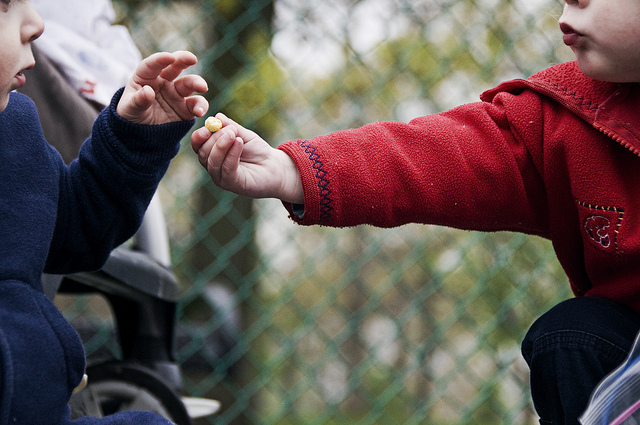 I ran into my friend Rick the other day in a small town near our homes in northern Vermont. He was just coming out of the bookstore, holding a pink plastic bag that, I would soon learn, contained a dozen eggs from his flock of free range hens. After a bit of small talk, Rick asked, “You don’t by any chance have a pair of jumper cables in your car?” I did.”Would you be willing to drive over to the post office and jump my pickup truck? I’ve been trying to park on hills until I can get a new battery, but there just ain’t enough slope at the post office.”

After we got his truck started, Rick held out his pink plastic bag and asked, “Could you use some eggs?” As a matter of fact, I could: Our elderly hens don’t produce enough for a family of four any more; Rick’s flock, on the other hand, was producing far more than a live-alone bachelor needs. I thanked him for the eggs, and we said our goodbyes.

This exchange — a battery jump for a dozen eggs — wasn’t a formal transaction of any kind; it didn’t add to GDP, and won’t be reported to the IRS. It wasn’t even barter, since I would have offered the help without the eggs, and Rick had only brought them to town so he could give them away. But it was an economic exchange nonetheless — one that’s so common around here that it hardly rates notice: Childcare, garden help, tools, construction labor, and especially food are routinely exchanged, lent, or given away without money changing hands. (This past summer, someone posted this bulletin board notice: “Free: Take as much as you want. We have two five-gallon pails of large cucs, 1/2 pail of beans, and that much broccoli. I will leave some paper sacks on the porch.”) Although this may sound like something that only happens in rural areas, similar exchanges occur in big cities, too, in neighborhoods where people know one another well enough to value their mutual interdependence.

Transactions like these make up what’s been called a “gift economy,” a concept introduced almost 100 years ago by anthropologist Bronislaw Malinowski. An equally apt term might be “sharing economy” — but that name has already been applied to something that, to my mind at least, is very different.

The “sharing economy” concept first appeared around 2010, launched on a sea of optimism about technology’s ability to transform the world for the better. In her TEDx talk describing it, Rachel Botsman, author of The Rise of Collaborative Consumption, made liberal use of terms like “revolution” and “seismic shift” to underscore the positive transformations the sharing economy would bring. Exchanges like mine with Rick are okay, she implied, but technology can greatly improve them: “We now live in a global village where we can mimic the ties that used to happen face to face, but on a scale and in a way that has never been possible before.” That scaling up, of course, is thanks to the Internet, where most collaborative consumption (soon rechristened “the sharing economy”) still makes its home.

Botsman’s description of how the sharing economy works is fairly straightforward: Through online platforms, people who need a product or service can quickly hook up with someone able to provide it. Need to drill a hole? Don’t go out and buy an electric drill that “will only be used around 12 to 15 minutes in its entire lifetime.” Instead, borrow or rent it from someone who already has one. Apply that principle to hundreds of other shareable items and multiply it by millions of sharing events, and we’re not only taking steps to eliminate hyperconsumption and its environmental impacts, we’re creating community, as well.

Part of Botsman’s thesis makes sense: Most modern households contain plenty of infrequently used tools, gadgets, and implements that could easily be shared among many families. This is one of the benefits of co-housing arrangements and ecovillages, in which washing machines, lawnmowers, even fully equipped kitchens are shared among all the resident households.

But the fact that there are more power drills per capita than necessary is hardly the essence of the hyperconsumption we need to minimize. Thanks to sophisticated marketing campaigns and cradle-to-grave advertising, the consumer culture constantly manufactures new needs; it molds personal identities around brand names and makes convenience an obsession. Shoppers today can buy robotic vacuum cleaners, forks that monitor their eating habits, and two-story inflatable cats; they can choose from 504 brands of designer jeans and two million smartphone apps. These are symptoms of a consumer culture gone mad — and sharing this empty bounty isn’t much of a cure.

Perhaps the most profound benefit Botsman claimed for Internet-based sharing is that it will enable us “to engage in humanness” again. The sharing economy, she argued, will make us better people, whose “rediscovery of collective good [will] create an economy of ‘what’s mine is yours.'”

The sharing economy has grown rapidly, but the utopian, egalitarian effects Botsman predicted have failed to materialize. Today, in fact, much of the sharing economy looks like big-business-as-usual. Although sometimes defined so broadly that it can include everything from recycling to cooperatives, the sharing economy’s standard-bearers are multi-billion dollar corporations: Uber currently has a self-reported value of $62.5 billion, more than the market capitalization of General Motors; Airbnb is said to be worth $24 billion, making it more valuable than the Hyatt Hotel chain; and Zipcar is now owned by conventional car-rental company Avis, which paid $500 million for it in 2013.

These sharing economy companies have more in common with big business than just their market valuations. Uber, for example, is notorious for its ill-treatment of drivers, uses opportunistic surge pricing to inflate fares when demand is high, and is reported to be “a workplace where sexual harassment takes place with impunity.” Like other big corporations, these companies use lobbying, PR, and campaign contributions to tilt the democratic process in their favor. Uber, for instance, succeeded in quashing New York City’s plan to cap the number of cars on the city’s streets, while Airbnb was able to scuttle a San Franscisco proposition to limit short-term housing rentals — spending 100 times more than its opponents.

Maybe the profit-oriented businesses at the top aren’t saying “what’s mine is yours,” but what about all those trusting strangers? Aren’t they rediscovering the collective good? Not so much. A recent survey of sharing economy consumers revealed that “saving money was actually the number one reason for people to participate in the sharing economy, with 82 percent of respondents telling us this was very or somewhat important to them.” The least important reason? “New relationships/friends or being part of a community.”

To be fair, not all sharing economy enterprises are cut from the same cloth as Uber and Airbnb. Tool-lending libraries, for example, are a non-profit means of addressing the electric drill quandary Botsman described. But by their nature, these are local, place-based initiatives: There’s a physical space where patrons come to find what they need, and where they’ll interact face-to-face with the staff and their own neighbors. Nor are tool-lending libraries an artifact of the Internet: The first, in Columbus, Ohio, was founded in 1976, and many others were established in the late 1970s and 80s.

But the sad fact is, digital technologies continue to erode the face-to-face interactions that underpin local economies and communities. It has become a cliché to point out how genuine friendships are being eclipsed by the shallow friending that takes place on Facebook, or how people sitting together in a café will stare at their phones rather than engage with each other. If my friend Rick ever decides to carry a smartphone, he might find himself hiring a stranger from TaskRabbit to jump his truck, rather than seeking out a neighbor. With Amazon and other online booksellers dominating the market, the local bookstore where Rick and I met may not be around much longer. These are real-world losses, as more of our social and economic life — including reciprocal exchange — is monetized and absorbed by the Internet.

To give the sharing economy its due, I admit that there can be environmental benefits to sharing goods like cars, rather than each of us owning one. But profit-making online platforms like Uber and Lyft aren’t the only — or the best — sharing models out there. Many years ago, I moved from New York City to a remote valley in the mountains of Colorado. Of all the differences from big city life, none fascinated me more than the fact that everyone in this valley left their vehicles unlocked, with their keys in the ignition. I remarked to one of my new acquaintances how wonderful it was that people were so trusting, so confident that no one would just drive off with their car. He looked puzzled a moment, then smiled and said, “That’s not why we leave our keys in the ignition: It’s to make sure that, if someone needs a car, they’ll be able to take it.”

This piece by by Steve Gorelick has been re-posted from Local Futures. For permission to repost this or other pieces on the Economics of Happiness Blog, please contact info@localfutures.org.

Local Futures/International Society for Ecology and Culture’s (ISEC) mission is to protect and renew ecological and social well being by promoting a systemic shift away from economic globalization towards localization.

Local Futures/International Society for Ecology and Culture’s (ISEC) mission is to protect and renew ecological and social well being by promoting a systemic shift away from economic globalization towards localization. Through its “education for action” programs, Local Futures/ISEC develops innovative models and tools to catalyze collaboration for strategic change at the community and international level.