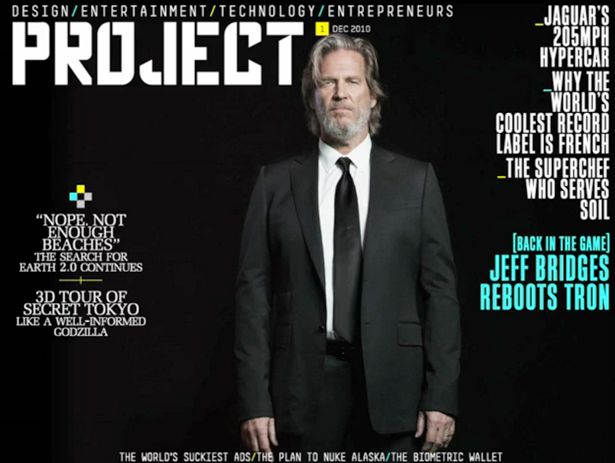 The iPad seems like a paradoxical environment to view the future of the new sharing economy, but Virgin Group founder Sir Richard Branson provided us with an exciting glimpse today when he today launched Project, his experiment with iPad publishing into the iTunes App Store.

While the iPad makes an ideal platform for experimenting with new forms of digital content, and new revenue models for publishers — with the assumption that high purchase price restricts ownership to affluent individuals (7.5 million and counting) — app developers must play by Apple’s rules or face exclusion. This walled garden approach has its fair share of critics.

In it’s maiden issue, Project delivers a spectacular visual treat and spans the globe in search of innovators and change-makers whose groundbreaking projects are a worthy complement to the transformative potential of the iPad. Nestled within the issue’s clever layout, and among the bells and whistles, is a particularly striking story about French record label My Major Company, which has turned the European music industry on its ear, and now has global ambitions.

Similar to sites such as Kiva and Kickstarter, My Major Company’s motto is “invest in the bands you love, and get a return on their success.” They require bands to raise $100,000 from their fans and supporters who become shareholders and have a stake in the success of their favorite artists. Once an album is cut, any profits are split with the artist, the label and the shareholders. Unlike other existing sites that already help with crowd funding, My Major Company also provides artists with mentorship and professional support once the money is raised, according to the Project story.

With French artist Grégoire, My Major Company had its breakout  success, going on to sell more than 1 million records. Further proving the commercial viability of the model, one Grégoire fan who initially invested 6,000 euros has already received more than 118,000 euros return on investment, according to Project . The success also attracted the attention of a major institutional investor who hopes to take the company global. Neighboring European nations such as the UK, Spain and Germany have already seen the launch of similar album projects, and the company has its sites on the U.S. in the near future. Not bad at all.

And speaking of Kickstarter, FastCo Design last week published a fascinating story on Scott Wilson who has ignited the Kickstarter community with his new project to turn the iPod Nano into a multi-touch watch. Dubbed the TikTok and LunaTik, the watch bands would house the iPod inside an aerospace grade aluminum casing, tied down with silicon rubber straps in an arrangement that is both functional, and stylish.

Intending to raise $15,000 in 30 days, Wilson, who is Nike’s former worldwide design lead in charge of watches, has already raised nearly $500,000 from 6,500 backers and still has 16 more days to go. Wilson has already set a Kickstarter record by raising his first $275,000 in three days, and is the second most highly funded proposal in Kickstarter history, according to Fast Company.

What both My Major Company and Scott Wilson’s watch band projects demonstrate is the tremendous potential of crowd funding that is lying in wait. Crowd funding offers a collective buying experience which few mass-produced products can match, creating both exclusivity and a genuine sense of community within existing online networks. Furthermore, the funder gets to see the direct results of his or her dollars at work, and can easily motivate friends to contribute additional money by using social media tools like Facebook and Twitter to share the message. Both also succeed because they are really cool, but they also represent changes in sharing behavior that have only just begun.