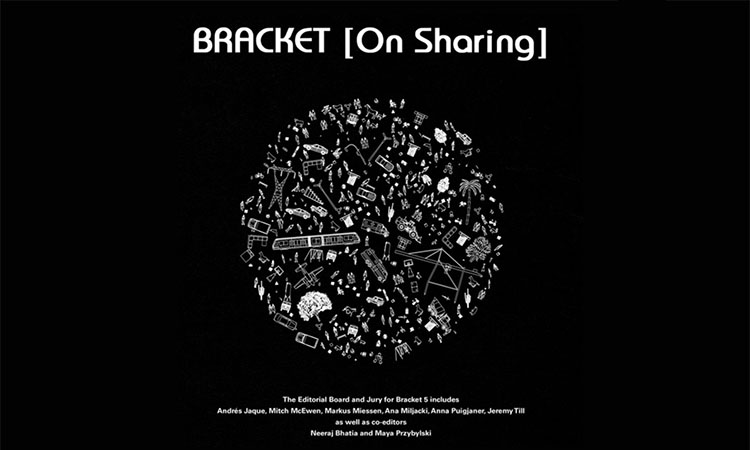 Bracket Magazine highlights the intersection of architecture, digital culture, environment, and other issues central to the current zeitgeist. The annual magazine, available online and in hard copy, is a collaborative effort between Archinect and InfraNet Lab and is edited by a geographically diverse four-person committee. In the past, Bracket has focused on farming, social action, and the concept of extremes. The focus of their latest issue is sharing. They receive submissions from architects, designers, urban planners, and researchers around the world. We caught up with two of the co-editors, Maya Przybylski and Neeraj Bhatia, to discuss why now is the time to explore the potential of sharing in architecture.

Ruby Pratka, Shareable: Why put out a sharing issue this year?

Neeraj Bhatia, Bracket: When we started Bracket, we wanted to frame an issue that was in the air and already being talked about from a lot of different angles, and examine the way a certain term was being used. We felt that the question of sharing was very important, considering the growth of sharing economy and social discussions involving the creation of community and issues of resource allocation.

What's your definition of sharing?

Bhatia: The magazine's definition is up to contributors, although we have an idea — to us, it's a way of distributing resources or developing a two-way relationship where you can take and also give back. The submissions will tease out different ideas. We're leaving it open enough so that unpredictable things are submitted and that makes the conversation really click.

Maya Przybylski, Bracket: It's been interesting to see thematics emerging (in terms of the definitions proposed by contributors). Some contributors go into the definition of the commons and unpacking [the idea of shared] spaces, others go into the idea of sharing within the domestic realm, or leveraging intelligence and industry in different ways that involve sharing.

Why does the idea of sharing in architecture seem particularly present now?

Bhatia: Our submissions were very diverse in terms of geography and design, and I don't think it's a coincidence that we're hearing the word sharing now at a moment when people around the world are trying to do more with less. People also feel very disconnected from the traditional centers of power. There's a lack of trust in governments and corporations. Sharing allows for more peer-to-peer interaction and more ways to create power between people. In that, it's very timely.

How can the principles of sharing be applied to architecture and the built environment?

Bhatia: It's amazing how much power physical space has to affirm our relationship with reality and make things tangible. To take one example, AirBnB is arguably an app, but there's a spatial side of it that's harder for people to tangibly understand because we can't see the whole spatial dimension. We need to unpack that and understand how, from a design perspective, to represent forms of sharing that are more difficult to track.

Przybylski: In one of our submissions, an article called "Connecting Suburbia," there's an acknowledgement of the opportunities created when things are converted into on-demand services. That author [Joel Piecowye] was thinking, "how can we take this suburban context and … make it accessible to all? What kind of spatial ramifications are involved in making it accessible?" In this issue, there's a lot of discussion of reclaiming the built form and [designing] highly visible infrastructure for sharing. … The core of the question [of sharing in architecture] is how you define the commons. We want to expand on the idea of sharing through necessity, culture, relationship, and governance, and we want to share the duality of resource allocation and creation of community. Some platforms have both. All of them cater to necessity but some of them tap into questions of community-building as well. I'd also like to examine the relationship of the sharing economy with civic accountability.

You mention "Connecting Suburbia," what other submissions really captured your attention?

Bhatia: The Water Tower [a communal water tank built into a single-family home, proposed by members of an architecture and urban planning collective in Mexico].  It's actually very buildable and pragmatic, how the structure could act as a water tower and a home. It also blurs the line between the public and private realms, between structure and public space, and you can really imagine it. I'm excited by several projects we've received. Some aren't meant to be in the real world yet, but this one is very easily implementable.

I also want to highlight one simple and remarkable project that has already been built, a set of different shared swing sets [in Buffalo, New York]. It takes a lot of effort to get a progressive project out. The authors twisted the bar [of a conventional swing set] into a circle and it activates a different experience, where the person swinging is more connected with the other swingers, seeing their faces and sharing their joy. Now, the experience of swinging, which was quite singular, becomes a collective experience. There are several of those swing sets now, very strategically located around Buffalo, working in a modest way to create community.

Przybylski: For me, it was an article we received about biotic climate refugees. We are already familiar with climate refugees as people being displaced by climate change, but this expanded the idea to talk about biotic [plant and tree] refugees and how the changing atmosphere and temperature and climatic conditions around the world are causing shared occupation with new species of trees. Thinking about it not only from a human angle but natural movement of biotic materials was quite interesting.

What did doing this issue teach you about the potential of sharing?

Przybylski:  We are still learning. The submissions were selected based on proposals and abstracts, and in the last week we've started to receive more robust submissions. We will be curating, organizing, and responding to submissions through the book, and writing our own contribution.

Where and when can people get a copy of the magazine?

Przybylski: We are hoping to ideally have the issue out in Fall 2019, available at major design stores and museums and online as well. For those of you in North America, we'll be doing a series of book launches, including at the Canadian Centre for Architecture in Montreal.

Header image is a screenshot from Bracket Magazine.