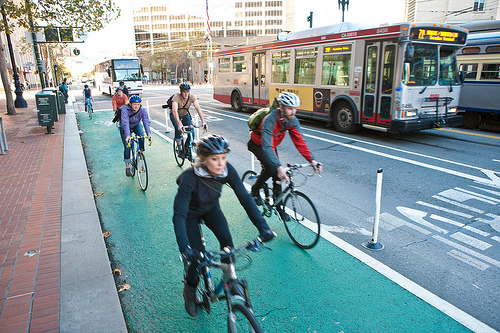 “Biking is definitely part of our strategy to attract and retain businesses in order to compete in a mobile world,” says Minneapolis Mayor R.T. Rybak as we pedal across the Mississippi river on a bike-and-pedestrian bridge. “We want young talent to come here and stay. And good biking is one of the least expensive ways to send that message.”

“I was having dinner with a creative director that a local firm was eager to hire for a key post,” Rybak adds.  “He was an American living in Europe, and we spent most of the evening talking about the importance of biking and walking to the life of a city. He took the job.”

Minneapolis has invested heavily in biking—creating a network of off-street trails criss-crossing the city, adding 180 miles of bike lanes to city streets, launching one of the country’s first bikeshare programs, and creating protected lanes to separate people riding bikes from motor traffic—which is why it lands near the top of all lists ranking America’s best bike cities.

“We moved from the suburbs to downtown Minneapolis to allow our employees to take advantage of the area’s many trails and to put the office in a more convenient location for commuting by pedal or foot,” explained Christine Fruechte, CEO of large advertising firm Colle + McVoy, in a newspaper op-ed. “Our employees are healthier, happier and more productive. We are attracting some of the best talents in the industry.”

David A. Wilson, who directs 1,600 employees at the Minneapolis office of the Accenture management consulting company, says good biking opportunities are important to the well-educated 25-35 year-olds he seeks to hire. “Five years ago, I don’t think business people were even thinking about bikes as a part of business. Today it’s definitely part of the discussion.”

Young people today are driving significantly less than previous generations, according to a flurry of recent reports. Even Motor Trend magazine notes that young professionals flocking to cities today are less inclined to buy cars and “more likely to spend the money on smartphones, tablets, laptops and $2,000-plus bikes.” Annual miles traveled by car among all 16- to 34-year olds dropped 23 percent from 2001 to 2009 according to a study from the “Frontier Group” think tank. The Federal Highway Administration found the miles traveled by drivers under 30 dropped from 21 percent to 14 percent of the total between 1995 and 2009.

These young people represent the “creative class” talent pool that many companies covet.  That’s why civic, business and political leaders in cities around the country are paying attention to the next generation’s wishes for lively, livable places to work and play. This includes biking—not only for commuting to work, but also for recreation.

Richard Florida, the economic forecaster who coined the phrase “creative class,” recently described these sought-after workers in the Wall Street Journal as “less interested in owning cars and big houses. They prefer to live in central locations, where they can rent an apartment and use transit or walk or bike to work.”

Thirty-three executives at New York high-tech companies—including Foursquare, Meetup and Tumblr—urged Mayor Michael Bloomberg last year to “support a bikeshare system as a way to attract and retain the investment and talent for New York City to remain competitive in the fast growing digital media and internet-oriented economy.” Bloomberg agreed, and the bikeshare program begins next March with 7,000 bikes for rent.

The City That Bikes

Chicago Mayor Rahm Emanuel was elected last year on an aggressive platform of bringing new tech and creative businesses to the city. When he scored a major coup this summer with Google-Motorola Mobility’s announcement that it was moving more than 2,000 jobs from a suburban campus to the heart of the city, Emanuel explained,”One of the things that employees look at today is the quality of life and quality of transportation because of the ease that comes with it. And that ease is having trains as a choice, buses as a choice and bikes as a choice getting to and from work.”

The City of Chicago’s Chief Technology Officer John Tolva says it’s no coincidence that Google-Motorola Mobility’s new home in the Merchandise Mart is right next to Kinzie Street, the city’s first green lane—where bike lanes are physically separated from rushing traffic to make riders feel safer and more comfortable on the road.

Martha Roskowski—director of the Green Lane Project, which promotes protected bike lanes across the country—explains, “Cities that want to shine are building these kind of better bike facilities as part of a suite of assets that attract business. And they find that bike infrastructure is cheap compared to new sports stadiums and lightrail lines, and can be done much faster.”

George Washington University business professor Christopher Leinberger, a leading authority on real estate, marvels at how bicycles are changing Washington, D.C., where he lives. “Bikes have been a critical part of D.C.’s turnaround. They are putting in protected bike lanes which does a lot more to encourage riding than just a white line of paint between people and a one-ton vehicle.”

Ellen Jones, director of Washington’s Downtown Business Improvement District, says, “It’s just crazy how biking has taken off here, especially the new bikeshare system which a lot of people are using for commuting.” We spoke after she returned from an appointment with managers of a high-tech company wanting to rent an old warehouse downtown. “A lot of their employees bike to work and they were concerned about whether they could easily get their bicycles upstairs. When bicycling is part of the final decision on where a company relocates, then we know its impact.”

Bikes are improving the business climate beyond big cities and those not recognized as bike capitals. Mayor Lee Leffingwell of Austin, Texas, said, “I certainly recognize the environmental, public health and quality of life benefits that more bicycling can bring our city, but I also value the contribution to the economy that comes with the provision of smart transportation options that attract major employers to Austin.”

Austin is ambitiously expanding its bike infrastructure; its first green lane opened last spring, one of 10 planned for the city. CEO Tyson Tuttle relocated Silicon Labs, which designs integrated circuits for computers, to downtown Austin five years ago to be close to the city’s bike trail system. It was one of the first of many tech companies that have now moved into the area. Tuttle, who himself sometimes rides to work, says it was a smart move. “Biking on the trails is something a lot of employees enjoy, and when people think about joining the company it’s a big draw.”

“My job is to convince emerging companies that they can get the workers they want to come here,” agrees Dr. Steven Bares, President of the Memphis Bioworks Foundation, an initiative to bring emerging health companies to Memphis. “The bike is part of the overall strategy to compete for talent.”

Jay Walljasper, author of The Great Neighborhood Book and All That We Share: A Field Guide to the Commons, chronicles urban life for a variety of publications. His website: www.JayWalljasper.com. Adapted from an article from the Green Lanes Project.