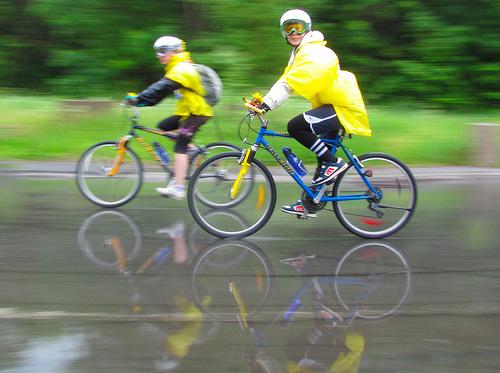 Capital Bikeshare is a network of 100 bike-vending kiosks in the District and Arlington County, Virginia, where residents or visitors can rent one of 1,100 public bikes for up to 24 hours at a time. Annual memberships are available for $50, and daily rentals are available for $5.

The launch of Capital Bikeshare made a splash in the media. Stories about the new system ran in The New York Times, The Washington Post, and innumerable blogs. Many described it as an expansion of Washington’s existing bike sharing program, SmartBike DC. The Times wrote, “One of the first municipal bike-sharing programs in the country is ballooning by a factor of 10.”

This isn’t strictly true, though. SmartBike DC, launched in 2008, is being decommissioned and replaced by Capital Bikeshare. Washington, D.C., isn’t expanding a good bike sharing system. It is replacing a bad one.

The failed SmartBike DC system was set up and operated by Clear Channel Outdoor, a branch of the media conglomerate Clear Channel that owns billboard and street furniture advertising space in 24 countries around the world. In fact, outdoor advertising companies have become the most popular providers of public bike systems. Selling these systems has become a lucrative business for advertising companies, but it’s not a good deal for cities or citizens.

The Ad Model for Bike Sharing

When a city wants a bike-sharing system, it has to figure out how to pay for it. The vast majority of systems—including many successful ones—aren’t financially self-sufficient. They don’t make enough money through subscription fees to cover the set-up and operations costs. Mayors tend not to mind, though. Those that want bike-sharing systems often want them to alleviate traffic problems, to improve public health, or simply for the cachet. But they have to find funding. 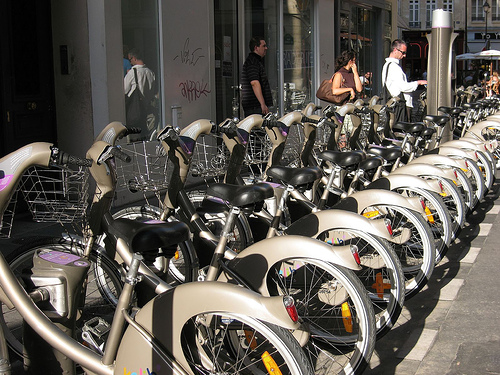 The advertising model was the solution devised in France, and used for Paris’s huge Velib’ system, the progenitor of modern, large-scale bike sharing. Here’s how it worked. JC Decaux, an outdoor advertising company, invested approximately $142 million to set up and run a massive, 10,000-bike system, and agreed to let the city keep the revenue from subscription fees. (In the first year of the program, that amounted to around $30 million.) In return, Paris gave JC Decaux a contract to erect and rent 1,628 billboards in the city.

The Velib’ system promised creative technological solutions to problems that had plagued bike sharing in the past. Earlier systems, beginning with Amsterdam’s anarchic “White Bikes” experiment in 1968 (public bikes were painted white and simply distributed around the city) suffered from rampant theft and vandalism. By requiring users to register, and using durable bikes and high-tech docking stations, Velib’ demonstrated that large-scale bike sharing was indeed feasible.

But with the advertising model, Paris also made it seem as though bike-sharing systems could be cheap and easy. As Paul DeMaio, a Washington, D.C.-based bike sharing consultant told me, “one of the reasons that the advertising model has been so popular is that a jurisdiction is getting what is in effect a free service that they would maybe otherwise not be able to afford.”

While modern bike sharing is still fewer than five years old, and it’s still too early to make definitive judgments, there are good reasons to believe that, in many failed programs, the problems can be traced back to the bizarre incentive structure of this advertising model.

One problem has to do with planning. In a new report, Carlosfelipe Pardo, a researcher at the Institute for Transportation and Development Policy, writes that public bike systems “are, above all, a means of public transport, and their planning and design requires the same serious consideration as any other public transportation system.” But with the advertising model, the advertising company saves money by skimping on planning.

Barcelona’s Bicing system, run by Clear Channel, got off to a disastrous start thanks to inadequate planning. The system simply didn’t have enough stations or bikes for the large number of subscribers who signed up. Furthermore, a failure to understand how commuters would use the system meant that stations in the city center were often packed full during the day, while those on the outskirts remained empty (and the reverse at night).

Another problem with the advertising model is lack of flexibility. Clear Channel launched the SmartBike DC system with a sparse network of ten rental stations. The District soon realized it needed more coverage for the program to succeed. Clear Channel balked, however, arguing that it was only obligated to fund the initial installation and operation of the system. The company had no incentive to expand the program, even if it was necessary to make the system useful.

There was also a dispute over advertising the program, ironically enough. According to a June 2010 report, the SmartBike system had 1,696 subscribers but 220 had never activated their access cards and 242 had never rented a bike. Many commentators blamed Clear Channel for failing to promote the service. But again, it had no financial incentive to, and promotion wasn’t required by the contract. In fact, Clear Channel was probably better off with an unpopular system: Fewer people using the bikes and docks means lower maintenance costs.

The advertising model has caused problems in Paris as well. In 2009, JC Decaux reported 8,000 bikes stolen or lost and another 8,000 damaged beyond repair—nearly 80 percent of the fleet. While it was clear that vandalism rates were higher than anticipated, it also seemed likely that JC Decaux was inflating the numbers. As part of its contract, JC Decaux was responsible for the upkeep and maintenance of the bikes. When JC Decaux reported these numbers, Paris was in the process of assessing fines on the company for inadequate maintenance. Ben Fried, writing at Streetsblog, suggested that JC Decaux might be reporting high vandalism numbers as a way of shifting the responsibility for the condition of the fleet from its own maintenance practices to Parisian vandals.

In short, with the advertising model, the operator of the system is always trying to invest as little as possible. When I spoke with Paul DeMaio, a consultant who has been involved with the bike sharing systems in Washington, D.C., he put it this way: “We found that with Clear Channel operating the system, there is no incentive to do work above and beyond what's written in the contract.” Moreover, with the advertising model, the operator has no skin in the game because it gets paid through billboards, not bike sharing.

What Are the Alternatives?

While it has been the most popular model, the advertising model isn’t the only option. In some cases, cities simply set up and operate their own bicycle sharing systems directly. In others—Montreal, for example—cities give contracts to companies that specialize in bike sharing systems and aren’t in it for advertising contracts.

But city planners should think more creatively. Their goal should be to make sure that the people operating the system have an interest in its success, the people benefitting from it are invested in it, and the system itself is tuned to local needs. On each of these points, we can make improvements by involving residents more directly in the development and operation of bike-sharing systems.

Imagine a co-op model, in which membership fees pay for the system itself. Buying a membership might cost about the same as it does now, $50 to $100 per year. That’s not quite enough to pay for a system, but with matching funds from the government and financing from a local bank, it might be plenty.

Montreal’s Bixi system, for example, cost $15 million to set up and quickly reached 20,000 subscribers. That’s $750 per person. For a comparable system, if each $100 in user fees were matched by $300 in government money, and the system were financed by an initial loan from a local bank, it could pay back its startup costs within two years.

If this matched subscription money went straight back to the organization operating the system, it would have an incentive to do all the necessary leg-work—advertising, expansion, and attentive maintenance—to give it its best shot at success. As the subscriber base grew, the operating organization would have more resources to expand.

And the members themselves might be able to contribute to the expansion process in very valuable ways. After all, mining the collective knowledge of the membership would be the best way to figure out where new stations were needed. The organization could allow paying members to vote on proposed locations, and then expand naturally in areas where the need was highest.

Alternately, a neighborhood or group of businesses could pool funds to sponsor a new station in their area. In Montreal’s program, the cost for each station was $50,000 on average. In a reasonably dense commercial or residential area, that amount of money wouldn’t be too hard to scrape together, especially if the government helped out a bit.

The best way for the government to find the money to subsidize this kind of co-op would be from elsewhere in the transportation sector. Ideally, the funds would come from some sort of Pigouvean tax that internalizes the costs of the dirtier alternatives to biking—urban congestion pricing, for example. If that weren’t practical, though, any city that was considering trading billboard space for a bike-sharing program could simply sell the advertising space itself, for market rates, and use that money. After all, the reason Clear Channel and JC Decaux have made a business selling bike-sharing programs is that the programs are cheaper than the value of the advertising they get in return.

A model that more closely resembled a co-op would also have the added benefit of making people feel more ownership of the system. That could be very valuable in cutting down on theft and vandalism. Members would be more likely to take good care of the bikes and report incidents of misuse. That could significantly reduce operating costs.

It’s great that bike sharing is exploding in popularity, under the dominant model they’re simply a liability for companies that ultimately want to sell billboards. And, because enthusiasm for bike sharing has been so high in general, it’s been easy to overlook the problems this ad model causes and improve on it. City planners should consider moving to a model that allows residents to not just share bikes, but also the systems themselves.

Andrew Price is Senior Web Editor at GOOD. He lives in Venice Beach.

Andrew Price is Senior Web Editor at GOOD. He lives in Venice Beach.