Bike Copenhagen Part II: If You Build It, They Will Come - Shareable
Skip to content 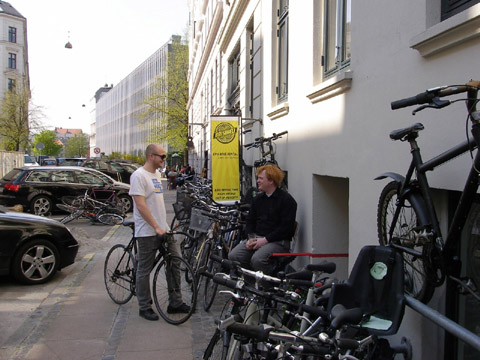 Over half the population (55%, according to the Center for Trafik) rides a bike to work or school in Copenhagen, and this is the real key to cycle culture success. This is a catch-22, but bear with me. In order to make a city cycle-friendly, people need to create both a “mental and physical space” for cyclists — which is to say that the society must embrace cycling and the government must provide adequate infrastructure. In most cities, an executive would be pooh-poohed for biking to work in a elegant Salvatore Ferragamo suit and tie instead of driving to the office in his BMW. Not so in Copenhagen where cycling is cool not just for alternative-types, but for the CEO, too.

A main issue in creating a positive “mental space” for cycling is safety. If people view cycling as dangerous, they are less likely to ride, and the fewer people who ride, the more dangerous riding becomes. Safety is in numbers. With so many people riding alongside cars in Copenhagen, awareness about bikers is high. As the number of riders has increased, the number of accidents has decreased. This does not, however, mean that cyclists feel safe. 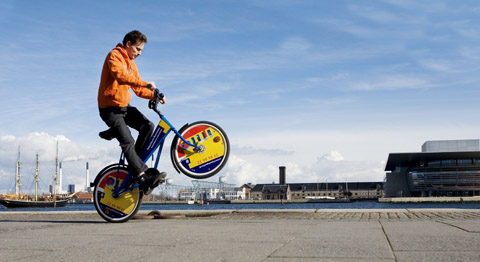 A bike from the Bycyklen (City Bike) bike-share program.

Andreas Rohls with Copenhagen’s Center for Trafik works to create a safe “mental and physical space” for cycling. “The risk of being in a serious accident has gone down by 65% (in the last 15 years), but at the same time, if you ask people about their sense of safety, that has been going down (too),” said Andreas gravely. Noting the question mark hovering above my head, he added, “The main reason is that we have seen such a rise in cycle traffic.”

More cycle traffic equals more pressure on cycle infrastructure, which leads to people feeling cramped and unsafe, even though they are actually safer than they’ve ever been. Go figure.

Of course, there are a few accidents. About 120 people are seriously injured in bike accidents each year in Copenhagen, and some of the most fatal accidents are caused by large vehicles making right-hand turns. The city has gone to great lengths to make cycling less risky and Andreas explained how intersections have been reconstructed to give priority to cyclists — stop lines for cars have been pushed five yards back from where riders must stop. To give cyclists an advantage, special bicycle traffic lights that change sooner have been installed throughout the metropolis, giving riders a 12-second lead over motorists.

The city government has also made it easy for Copenhageners to ride when they commute by creating carriages with bike racks in local trains. Taking a bike on a Danish Railways is free. In addition, there is talk of having a bike-share system set up at all major stations to encourage train commuters to ride both in the suburbs and in town.

Community bike-sharing is nothing new in Copenhagen. The City Bike, or Bycyklen, is a 100%-free city bike program. Since most locals have a bike (if not a couple of them), the bike-share program is mostly used by visitors. The system is ridiculously simple. At one of the 110 bike stands, a rider inserts a 20 Danish Kroner coin into a sort of lock, and when the user returns the bicycle later in the day, they get their coin back.

In most cities nowadays, community bike-sharing comes with a price tag, whether that be a yearly membership fee or a day use charge. Most truly free programs have died out because riders steal bikes, cycling off into the sunset, never to be seen again. Bycyklen is an exception to the rule. Johannes Bjerrum of City Bike believes this is because Bycyklen is not an especially attractive model (Read: “Ugly”). Made of stainless steel, Bycyklen is heavy (22 kilos), clunky, and barebones. It doesn’t have lights or gears and its brakes are fixies, which could be a pain for some riders. Bycyklen runs on advertisers, and is a sort of billboard on wheels. The Bycyklen cycles are painted in the wild colors of their sponsors which include big names like Coca-Cola and Adidas. 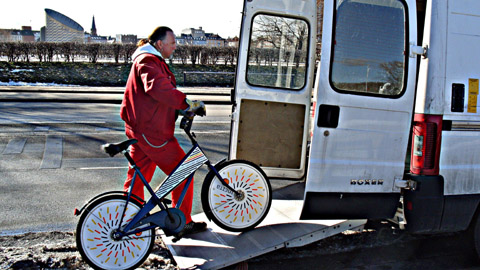 A bike from the Bycyklen (City Bike) bike-share program.

Copenhagen may be lightyears ahead of other cities when it comes to bike infrastructure, but citizens want more. Locals complain about the serious need for bicycle parking, general road conditions, and cycle robberies. My Danish friend Anne Katrine Roien has had 20 bikes stolen and admits that cycle theft is a real drag, especially if it’s your one way to get home on that given night.

Johannes Bjerrum would like the city to create more “cycle highways” where riders could get up to top speeds without having to break for traffic lights and kill their momentum. Henrick Smedegaard Mortensen also likes the idea of more speed, but first would like to see the width of bike lanes increased so that riders can travel side-by-side and have a chat while they pedal from Christianhavn to Frederiksberg.

I’d love to say that Copenhageners are green gurus biking through hail and snowflakes to save the earth, but it’s not so. The Danes are human, after all, and their heavy cycle use boils down to three main factors: time, ease, money. With tax on cars high, gas expensive, and parking limited and exorbitant, riding a bike is budget-friendly.

“So what makes people cycle? If you create that environment, most people will choose [what is] the easiest and fastest mean of transport,” Andreas told me candidly, adding that it has nothing to do with a dedication to biking, as I hoped it did. He added, “It’s just the easiest and the fastest way to get from A to B.”