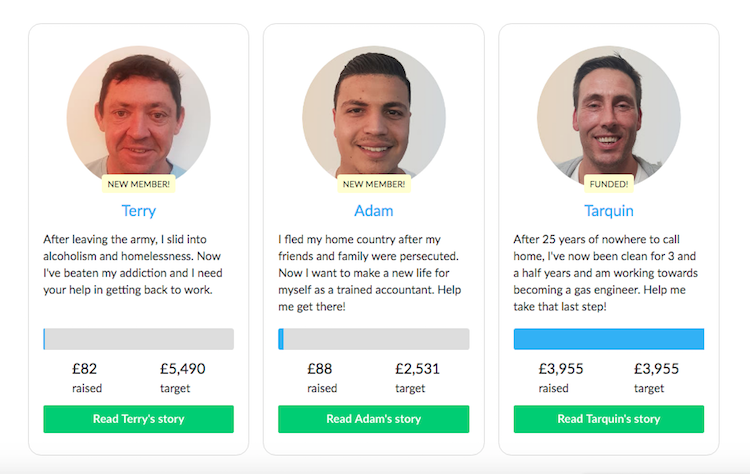 There are more than 300,000 people who are homeless in the United Kingdom. That's the figure from Shelter, a nonprofit based in London, England, that provides legal and other support services for the homeless. A new organization called Beam, founded by Alex Stephany, is taking a unique approach to assist the homeless population. The platform features profiles of people — recommended by other charities — who are looking for job training assistance. Those who wish to support them can either choose to fund their appeal through a one-time or recurring donation through the platform. It's an innovative model, though as Stephany says: "Homelessness is an extremely complex human problem. You cannot solve it by technology alone." We talked to Stephany about how Beam works.

Courtney Pankrat, Shareable: How does the process work for new members?

Alex Stephany, founder and CEO of Beam: We bring on roughly one new member per week. We've built a sophisticated operational layer on top of the crowdfunding platform. We have partnerships with 12 registered charities in the U.K. We take references from those charities and from third parties. Our employees who have relevant expertise in the sector work with the individuals like case workers. We do a risk assessment on the individuals and help them find a program to train for. Once they launch their campaign, we look after all the funds and purchase the budgeted items on behalf of the individuals.

Once the campaign is done, does the member then need to pay the money back to Beam?

No. However, when members have moved through the process, they can opt to "pay forward" the value of their campaign. It is optional but so far, without hesitation, every member has opted to do it. Beam is the least competitive crowdfunding platform in history. Far from there being a sense of competitiveness between the members, there's actually a sense of camaraderie. The members support each other and root for each other.

How do you find the different training programs for members?

It's a very empowering process. We ask members to do research, and we put them in the driving seat in the same way that you would expect to be in the driving seat if this was your life. For example, we were looking at a particular training course for one of the members. We'd drawn up a shortlist of two and we had a preference for one of them and the individual had a preference for the other. Of course, the individual's desires and views took precedence.

Beam must be a great confidence builder for members. Is this something you've noticed?

What we are building is self-confidence, self-belief, things that are often really lacking in the individuals we work with. Typically people will join the platform with very low self-confidence. Usually their main worry is: "Why would anyone help me? I don't deserve help." Then between 50 and 200 people fund their campaign and a lot of them leave messages for members. We pass on these messages, and it's absolutely transformative. Members realize there are a ton of people out there who care, who want them to succeed, and who are on their side.

Have you had anyone not fulfill their training program?

We knew when we started this that some campaigns would have to be withdrawn and not everyone was going to succeed through this model. Obviously we are working with people who have often a mixture of complex problems. They may have historic mental health problems, substance abuse problems or other things.

We have had one member's campaign withdrawn. We explained the situation to the campaign supporters. We said that he’s working with his support services, he’s safely housed and that we are remaining in contact with him. We said that he may be able to come on at a later date.

We were fully transparent about the amount of funds that had already been spent out of the campaign and we gave the supporters three choices. They could get a full refund, reallocate their funding fully to another person's campaign, or split their donation equally between every current member. The response we had from this kind of transparency was phenomenal. No one asked for a refund. People got back in touch and were incredibly understanding.

Critics might say that since the U.K. is a welfare state, the government should be taking on this problem. How do you respond to that?

The government here is doing a lot but my view is that we shouldn't expect government to do everything. This is a very large, complex problem. Our view is that everyone has a role to play. We have a role to play as a technology organization, charities have major roles to play, and individual citizens have roles to play as well. Our view is that when all these different stakeholders play to their strengths, we are going to make major progress on this problem.

What has been the hardest part of the project?

Before we launched, there was a long consultation period with a large number of charities and people who have experienced homelessness in order to work out every little tweak and wrinkle of this model. There is so much more to this model than just raising funds. The really complex things are the people and how you work with them. Our view is that this is not something to be rushed into given the vulnerability of the people on the platform. This is something that has to be done very slowly, very thoughtfully in consultation with people who have been working on this problem for a long time.

Header image is a screenshot of Beam's members