Are You Ready to Trust a Decentralized Autonomous Organization? - Shareable
Skip to content 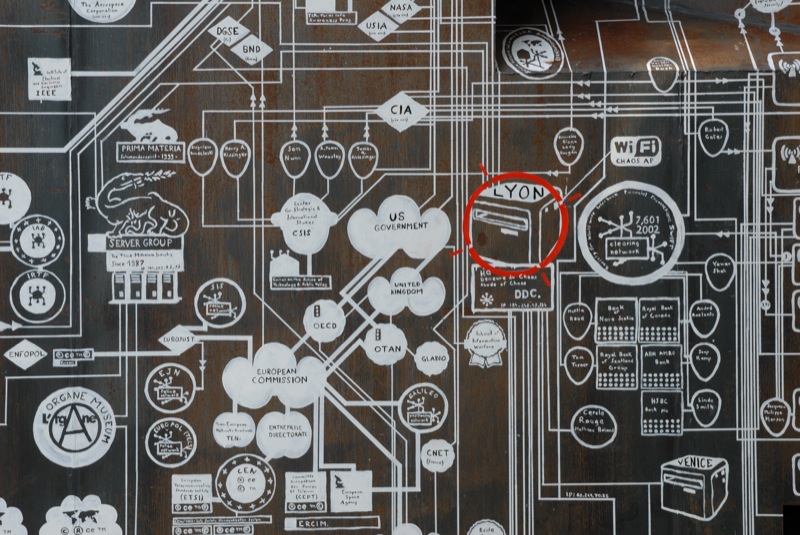 The “social” in a lot of online social networking turns out to be pretty weak. Sure, we can share pictures and opinions with thousands of people, even organize protests and recommend one another for jobs. But protests organized on Facebook event pages tend not to turn into lasting organizations that can wield power after the fact. The employer one finds through LinkedIn can’t exist solely on the network; there’s likely brick-and-mortar somewhere, and certainly some paper documents. Social media only goes so far. So it’s probably not surprising that bands of geeks — and their investor friends — are eager to upload more aspects of life to the Internet: from money to contracts to organizations to entire countries.

Some of the odd boundaries between online and offline community are on display when you walk into Hacker Dojo, a member-run hackerspace not far from the Googleplex in Mountain View, California. A dull office-park storefront opens into an expanding series of rooms with clusters of people, mostly white and Asian young men, staring into their individual screens, but together. At the door, you’re met not by a receptionist, but a computer asking for your email address. When you give it, you’re told the rules. Among their distinctions: Everywhere and everything is “100 Percent Communal,” but it is “Not a Public Facility.” Naps are okay, but sleeping is not.

Hacker Dojo was host to an event in late June where one could find some features of a new order being worked out. Steve Randy Waldman, a freelance economist and blogger, spoke to a room of about 20 people interested in Bitcoin and other crypto-currency projects. He talked, actually, about the close-knit fraternal organizations that, a century ago, provided insurance and medical benefits to millions of Americans. Many of these mutual-support networks have fallen away in an age of mobility and frayed communities, but maybe crypto-currency can bring them back.

The big idea that makes crypto-currency tick in the first place is the blockchain. Bitcoin’s blockchain, for instance, is a list of transactions that shows which users hold how much of the currency. No one entity controls the list. Rather than being kept on a single, central server, the blockchain is stored and checked across the whole network of users. Sophisticated mathematics — the “crypto” part — keeps it secure. Thus, a lot of the trust that typical currencies rely on — that the issuing government won’t go bust, that cash can’t easily be counterfeited — is no longer needed. In the algorithm we trust. 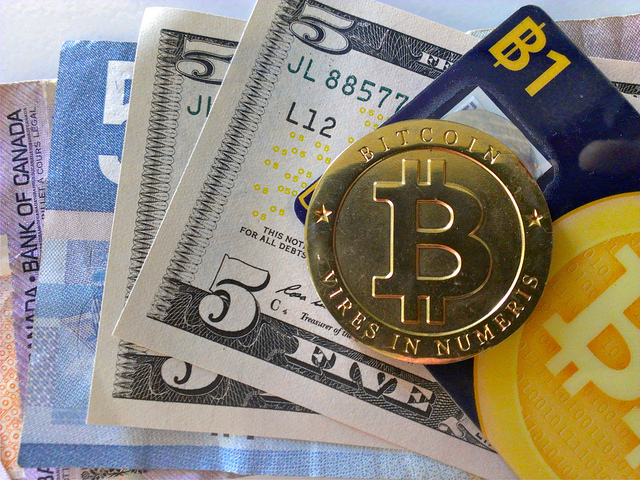 Money, it turns out, is just one of many things one can do with a blockchain. Not long after Bitcoin appeared in 2009, people started recognizing this. Blockchains can be used to send messages or transfer ownership records or store data. Any kind of contract could also reside on a blockchain, written in computer code rather than ordinary legal jargon. These “smart” contracts could establish marriages, organizations, even national constitutions — anything you can code. The contracts would enforce themselves in a pre-determined way, including by automatically removing funds from a party’s account. The stakes are that much higher than what we’re used to on Facebook. And, since blockchains spread their data across a network, they also offer the promise of radical transparency. All contracts, transactions, whatever — they could be out in the open for examination.

The urge to decentralize and autonomize has informed social movements since the 1970s. The language of “decentralized autonomous organization” appeared among the swarms of activists in the late-1990s counter-globalization movement. But the trust-replacing mechanisms of a blockchain offer less an ideology than a method, one which may make it far easier for us to hand our relationships over to code.

A big part of the appeal of DAOs is the undiscovered, unregulated possibilities they present — possibilities that offline legal and social conditions don’t allow. At least until government regulators catch up, DAOs are a blank slate. At Hacker Dojo, Waldman described the impulse this way: “There’s something we’d like to do, and we’d like to create some space for ourselves to do it.”

In principle, a DAO could be anything from a radical collective, governed by the consensus of its members, to a virtual drone that trades assets and pays payrolls with no human inputs at all. There’s lots of room in between. A $100,000 bounty was posted on May 17 for developing a software platform to replace the Bitcoin Foundation, a leading promoter of the currency. A few weeks later, a group called Project Ðouglas presented the Eris platform, named after the Greek goddess of chaos and designed for running a DAO with democratic, meritocratic structures in mind. (Project Ðouglas prefers to use the term distributed autonomous organizations. The “Ð” is another story.)

Eris exemplifies not just the potential of DAOs, but also how incredibly conjectural they remain. It is built on the basis of Ethereum, a platform that hasn’t even been released yet, fleshing out a vision of a decentralized future that is less than a year old. 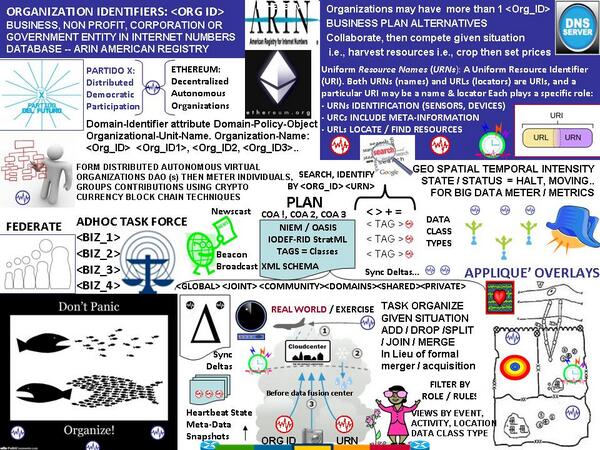 Perception, however, is enough to mean real money. Go to a Bitcoin conference, and you’re likely to meet, among the legions of libertarian hackers, a serious contingent of go-getters who have recently quit jobs in finance. They’re packaging their startups as modules that big banks can buy when blockchains come closer to the mainstream. With DAOs, not just a currency like bitcoin but a whole new financial system can be built on blockchains, further from the reach of conventional regulatory mechanisms. The often-touted promise is that a system like this, without the “friction” of regulation and big-bank bureaucracy, and with a lot more transparency, will speed up innovation and bring an infusion of needed financial services to the under-served populations.

“Unlike past revolutions, this is a revolution not to be joined, but to be owned,” declares entrepreneur Joel Dietz in the manifesto announcing his startup, Swarm. Through “cryptoequity,” Dietz wants to take crowdfunding to a new level with a blockchain: Support a new project, and rather than getting just a gift in return, you’re a part owner, entitled to a share in both profits and decision-making. You also share in the success of future projects funded through Swarm’s cryptoequity. In this way, Swarm proposes to break the monopoly of the rich on investment and governance. Important details on the model have yet to be clarified, but that hasn’t stopped Swarm from raising almost $1 million worth of bitcoin.

This kind of distributed, easy-access finance could mean a revival of economic democracy, a new form of cooperative ownership. But not everything called “democratizing” is created equal. New, unregulated realms are often most empowering those who already had lots of power in the old system. Precedents like the subprime mortgages hawked on poor communities before the 2008 financial crisis should remind us that expanding access to finance can be a means of exploitation.

How government regulators will respond to the prospect of DAOs, or how the pioneers will regulate themselves, is anybody’s guess. “I’ve always wanted to change the world,” one member of the Ethereum team told me, after meeting with legal advisors in New York. “But I don’t want to do it from a prison cell.”

Bitcoin, which first appeared in the wake of the 2008 financial crisis as a tool of decentralized liberation, is becoming awfully centralized. The richest 100 Bitcoin users hold 20 percent of the wealth, making it far more concentrated than the normal economy. The process of “mining” is now so much in the hands of a few as to pose a threat to the whole system. While decentralized networks sound like weapons against gross inequality, they can also become the means of something grosser. It all depends on how the networks are structured and put to use.

In his talk, Waldman said he hopes to see DAOs that are “designed as strategic actors.” By collecting dues and holding members responsible to contracts, a DAO could be a means of organizing new kinds of labor unions or fostering disciplined consumer activism, which have failed to appear on social media so far. What if, rather than just indicating on Facebook that you plan to participate in a protest, you joined a group of people contractually bound to do so? And then, after the fact, what if the group could debate and decide together what to do next?

Amid all the speculative promise, one can forget that there remain other ways to organize ourselves than blockchains. Waldman cited such pre-digital examples as in-person meetings, distinctive clothing, even religious belief — “a powerful engineering tool, and we should take it seriously.” He talked about fraternal orders like Freemasons and Elks mostly in the past tense, as sources of inspiration for the DAOs to come. But three-quarters of the way through his talk, one of the engineers present — middle-aged, with a thick beard and large glasses — raised his hand and declared himself a real-life Freemason.

“We’re still around!” he insisted. He cited stories of real-life good deeds done through his lodge. Offline.

I’m Nathan Schneider, a writer and editor based in Brooklyn. I’ve written a book each on

I’m Nathan Schneider, a writer and editor based in Brooklyn. I’ve written a book each on God and the Occupy movement. Writing articles for a variety of publications—from Harper’s, The Nation, and The Chronicle of Higher Education to The New Inquiry and The Catholic Worker—keeps my notebooks filled. Editing the online religion magazine Killing the Buddha keeps me odd. Waging Nonviolence, a publication I co-founded, keeps me up on struggles for justice around the world. And being a contributing editor at the Social Science Research Council’s online forum The Immanent Framekeeps me in touch with the academy.

I suppose what I’m after is the chronicling of ideas, of perfect worlds, of ordinary imaginations in practice. My method is speculative. Every word is hypothesis—while recognizing fearfully that with even the most casual remark we are building ourselves and our world irrevocably. A person is like a boat, as the song goes:

Facing where you’ve been with your back to what’s ahead—row hard or row gently, and try to steer.