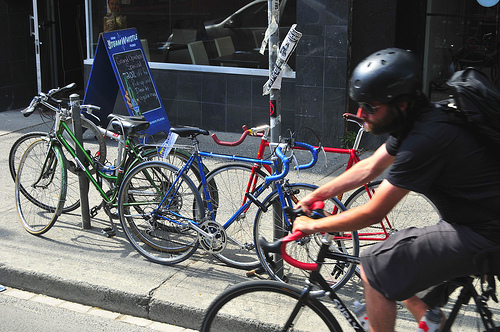 This article is excerpted from the original post on Sightline Daily with permission from the author.

Public bike-share programs, whether run by municipal governments, private entities, or both, are built on a simple idea: blanket urban areas with hundreds, even thousands, of identical, sturdy bikes and give people a huge network of convenient stations to park them at. Make the system accessible and reliable, so that citydwellers can get to nearby destinations, on time and without a hassle.

Cities everywhere are climbing aboard. Check out these videos from London, DC, and especially Hangzhou, China. (Watch it below!) Hangzhou’s enormous bike-sharing program of 50,000 bikes and 2,050 stations has already become an integral component of the city’s transit network. The program is so popular the city plans to expand its fleet to 175,000 bikes by 2020!

The Biggest, Baddest Bike-Share in the World: Hangzhou China from Streetfilms on Vimeo.

If bike-sharing has been successful in so many places, why isn’t the Pacific Northwest already in on this? Why are there only two operational bike-sharing programs in all of Cascadia: a small one in Pullman, Washington, on the campus of Washington State University, and a tiny one in Golden, British Columbia? Golden has 15 bikes, which mostly go back and forth between the town center and a nearby campground.

It turns out there’s something the Northwest has that other places do not, and it makes all the difference: mandatory helmet laws. British Columbia’s helmet law is province-wide. Numerous cities and counties in Washington, including King County and Spokane, have helmet laws. In Oregon, only riders under 16 are required to wear helmets, but until now cities such as Portland have been slow to set aside money for bike-sharing because thecompetition for scarce funding is fierce.

There is nothing more contentious in the cycling community than the debate over helmets, and though the safety research is mixed, the political lines are sharply drawn (video). When it comes to bike sharing, however, there are a few things on which the evidence is clear:

Forcing casual riders to don helmets is a high barrier to bike sharing. It depresses ridership, getting in the way of the overwhelming health and safety benefit of having more bikes on the roads. Providing headwear at kiosks or local businesses raises concerns about sanitation (lice!) and safety (cracked helmets). Casual, would-be riders weigh those concerns and decide to keep walking.

Besides, no bike-sharing program tells people not to wear helmets. They just leave wearing one as a personal choice.

The crux of the matter is this: the Pacific Northwest can reap the huge benefits of bike sharing without compromising safety. It just needs to tweak its helmet laws. Here are two ways to do it: 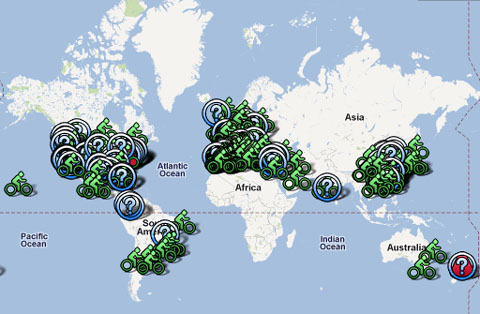 Map of bike-sharing programs around the world on Google Maps.

Though our helmet fiats are the greatest legal obstacle to a bike share roll out, there are a couple other barriers worth mentioning. A recent University of Washington study (.pdf) examined the feasibility of bike-sharing in Seattle and discovered a slew of hurdles over curb space usage and the city’s sign rules. Bike-share programs sell advertising space on their bike stations to help cover their costs, so the design of the bike stations must reflect the needs of advertisers. At a minimum, that means that having consistent and easily understood sign rules is a must. In Seattle, though, almost every district from Pioneer Square to Ballard has its own sign guidelines. This patchwork of regulations makes it hard to design a single, modular bike-share station that will be legal citywide. And custom bike stations would be prohibitively expensive.

Fortunately, Seattle’s municipal code allows the Director of the Department of Planning and Development to issue signage exemptions in downtown areas. No doubt other Northwest cities have their own particular hoops to jump through, but once the helmet barrier is addressed nothing should truly stand in the way of a concerted push to bring this transportation revolution to Cascadia.

Bike sharing is too good an opportunity to let pass. It’s sustainable, healthy, and doesn’t require extra parking garages or oil imports. Fortunately, Vancouver has solicited contractor bids to design a system in spite of BC’s helmet law, and Seattle and Portland are exploring the idea. Let’s treat bike-share riders like pedicab passengers, exempt them from helmet rules, and join the global wave of magic carpet rides.

A Reluctant Cyclist Takes to the Streets

A Generational Shift in Driving