Animation: The Life and Times of Charlotte, NC - Shareable
Skip to content 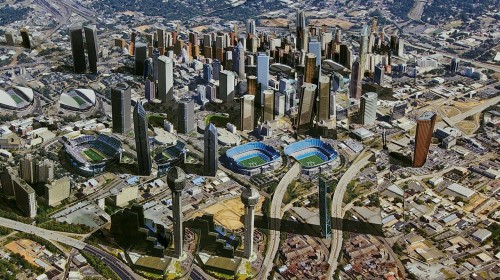 In nine minutes, artist Rob Carter reveals hundreds (thousands?) of years in the life of Charlotte, North Carolina, from emergence to quietly apocalyptic disappearance. You can (and should) watch the whole video here; you can watch the final three minutes right now:

This is how Carter explains the project:

Metropolis is a quirky and very abridged narrative history of the city of Charlotte, North Carolina. It uses stop motion video animation to physically manipulate aerial still images of the city (both real and fictional), creating a landscape in constant motion. Starting around 1755 on a Native American trading path, the viewer is presented with the building of the first house in Charlotte. From there we see the town develop through the historic dismissal of the English, to the prosperity made by the discovery of gold and the subsequent roots of the building of the multitude of churches that the city is famous for. Now the landscape turns white with cotton, and the modern city is ‘born’, with a more detailed re-creation of the economic boom and surprising architectural transformation that has occurred in the past 20 years.

Charlotte is one of the fastest growing cities in the country, primarily due to the continuing influx of the banking community, resulting in an unusually fast architectural and population expansion that shows no sign of faltering despite the current economic climate. However, this new downtown Metropolis is therefore subject to the whim of the market and the interest of the giant corporations that choose to do business there. Made entirely from images printed on paper, the animation literally represents this sped up urban planners dream, but suggests the frailty of that dream, however concrete it may feel on the ground today. Ultimately the video continues the city development into an imagined hubristic future, of more and more skyscrapers and sports arenas and into a bleak environmental future. It is an extreme representation of the already serious water shortages that face many expanding American cities today; but this is less a warning, as much as a statement of our paper thin significance no matter how many monuments of steel, glass and concrete we build.