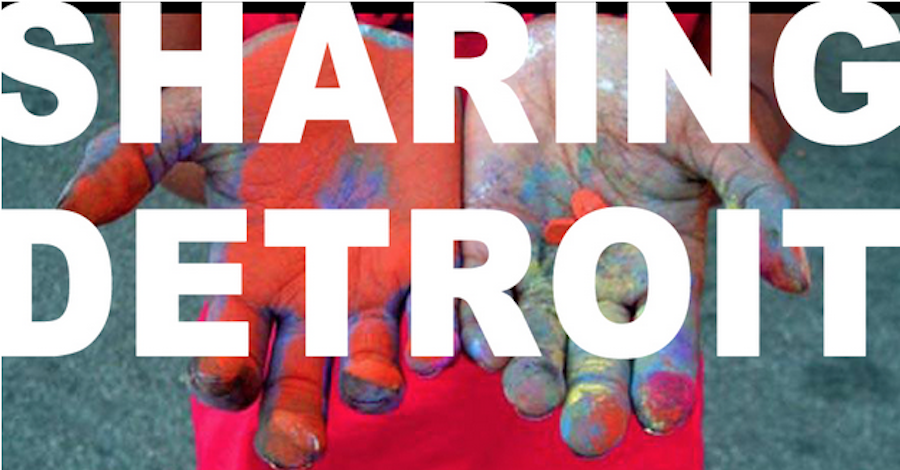 Unbeknownst to most who have yet to venture through my beloved city, Detroit is a sharing city. We have been for centuries, and we will continue to be. We have a culture where it is commonplace to acknowledge each other when we pass; to share a smile, joke, or story while sitting in the laundromat or on the bus. And we share our wealth. Below are some of my favorite sharing spaces in the city. Please feel free to add any that you know of in the comments—I always look forward to discovering more sharing spaces. 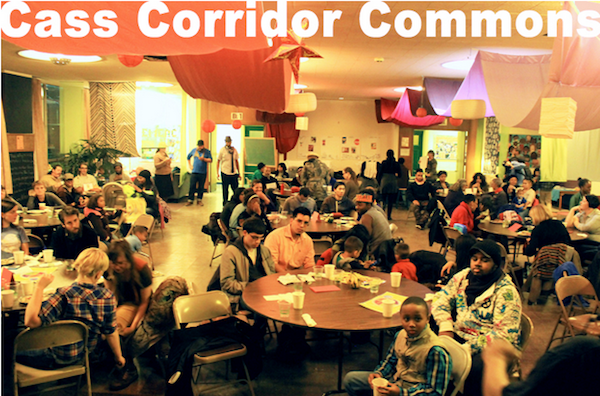 Modeling the practice of collective work and responsibility, the Cass Corridor Commons (CCC) is a space that uniquely nurtures collaboration among community and grassroots organizations via the way the space is utilized and shared within a commons framework.

“Each group residing in the space creates their own agreement with the Commons, and that agreement governs the nature of their relationship. We nurture our internal community by holding regularly scheduled CCC meetings for inter-organizational updates and CCC proposed initiatives, where each organization may raise questions, concerns, and give input— it’s where co-ideation for collaborative programming occurs. The Cass Corridor Commons is an environmental justice, social justice, and cultural activism hub. Our mission is to be a space that fosters collaboration and cross-pollination.” 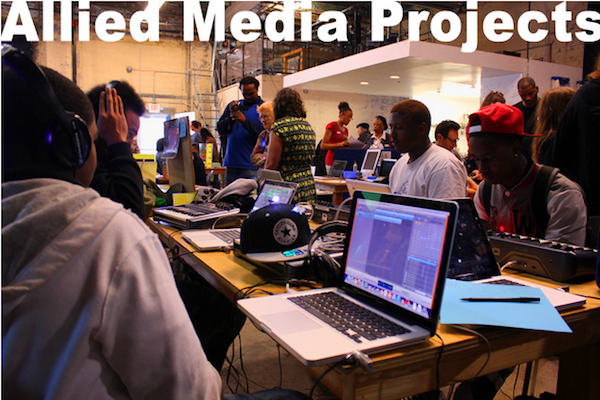 A “Disco-Tech” (Discovering Technology) event hosted by AMP where community members interact, experiment, and create using many forms of media and technology

Just around the corner from the CCC is a building that houses another awesome sharing space: Allied Media Projects (AMP). This organization hosts a national conference, the Allied Media Conference, which brings together thousands of media-makers, artists, educators, and activists annually. AMP also runs several programs that facilitate information-sharing and empowerment through digital narrative creation within the city of Detroit. Some of these projects include Detroit Digital Justice Coalition (which helps bring wireless networks to the community), Detroit Future Schools (which has successfully paired hundreds of students with digital media specialists to co-create projects), and the organizing of community events in which folks can exchange stories, ideas, and technical skills. Jenny Lee, director at Allied Media Projects explains:

“At AMP, the concept of media-based organizing and the process of speaking and listening is very important… how [we] construct narratives through the thoughtful participation of a multitude… and even more importantly the change that happens as we are making media.”

Lee adds that the project is empowering on both a personal and community level.

“Power is really growing within grassroots communities,” she says. “When I see AMP doing the Digital Justice Coalition, the Food Justice Task Force, the Restorative Justice Initiative, the Research Justice Initiative—there’s so many pockets of networked activities emerging. It feels like this…alchemic process where people are figuring out, how do we create our own power—in their labs which may be gardens or media making processes.” 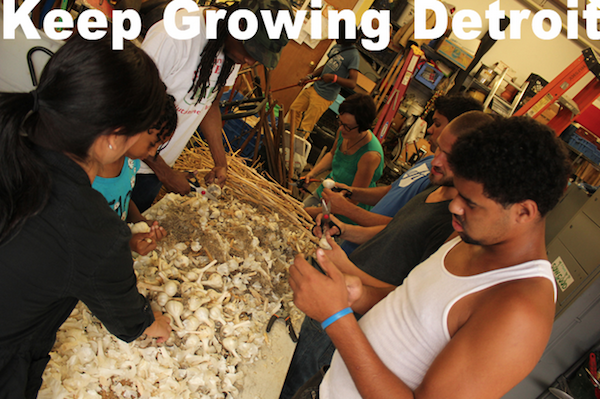 Speaking of gardens, Detroit leads the nation in urban gardening and farming. Keep Growing Detroit (KGD) is a collective of several organizations, urban gardeners and farmers within the cities of Detroit, Highland Park, and Hamtramck. Currently they are 1,400 members strong. Members buy in at a rate of $5-$20 per year based on the size of their garden, and become part of a community that buys and shares bulk organic seed and transplants, shares tools and equipment, shares gardening knowledge, shares responsibility in decision making via a series of potlucks, and shares the opportunity to sell produce collectively at market.

An educational series for members includes one-day, hands-on workshops in member gardens, community kitchens, and greenhouses that address specific topics from staking tomatoes to canning them. In addition KGD offers the Urban Roots course, which is a nine-week intensive that pairs master gardening and community engagement training with the intent that graduates are fully equipped to create community gardens and train others. A few community farms that have been started or run by by graduates include: Feedom Freedom Growers, Oakland Ave Garden and Greenhouse, Earthworks, D-Town Farms. 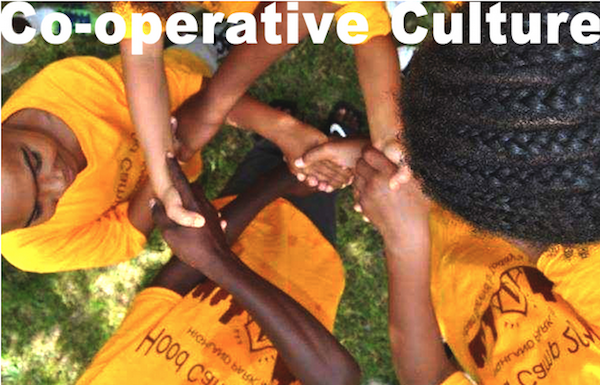 Growing out of the Detroit Black Community Food Security Network, which owns and operates D-Town Farms, is the Detroit People’s Food Co-op (DPFC), an ambitious initiative that will send ripples throughout the Detroit economy. Slated to open in late 2015, DPFC will be a consumer co-op complex that houses a full grocery store, commercial kitchen for community use, workshop and demonstration space, and office space dedicated to hyper-local investment. So far the group has garnered community support through a series of community conversations and teach-ins, created an interim board, and is moving steadfastly forward.

There are other co-ops that are also starting in Detroit. The Center for Community Based Enterprise (C2BE) is working with many groups that are either converting existing businesses into worker-owned co-ops, or starting new co-ops. This group is also creating a worker center to be utilized by a multitude of co-ops as a central administrative office.

Another co-operative that is building momentum is Soulardarity. Based in Highland Park (a small municipality wholly surrounded by Detroit), this co-op grew out of the need for public lighting after the electric company repossessed 1200 streetlights from this community. Co-founder Jackson Koeppel explains, “Soulardarity is building an energy co-op in Highland Park to bring light to the city and promote a solar energy system that residents are responsible for and can benefit from equally.”

Another example of folks getting together and creating a co-operative live/work, multiple benefit situation is the New Work Field Street Collective. In this space, a group of people are continuously, collectively rehabilitating an old house to fit their needs as a collective.

“What we are about is living the new culture, which includes self-reliance, independence, and sustainability within community,” says NWFSC member Blair Anderson.

Members of the space live communally sharing kitchen and common space. Each member’s talents are input into cottage industries that also have a space in the house. Currently there is a community garden, sewing and garment repair room, and New Work Leather enterprises which bring community production and income into the space.

Detroit also boasts a number of spaces and programs that are open to community members to utilize and share technology and tools. As Blair explains, “We are fortunate to be able to utilize cutting edge-technology to create our products.”

Incite Focus, a state-of-the-art fabrication lab, offers self guided community hours every week. New Work Leather and other small businesses are able to access and learn to utilize their machines, as “technology for community production” is one of the main goals of the space.

The Mt. Elliott Makerspace, is another example of space intended for experimentation and tinkering. It is open to all age groups but geared more for the youth. This space often collaborates with schools and other organizations for events around the city that focus on electronic deconstructing and making. There is also a makerspace intended for adults in the Recycle Here recycling center. With a focus on bikes, the Hub of Detroit is a place where young people can learn to customize and repair bicycles. They have several programs geared to bike mechanics and often collaborate with other groups in the city to host bike clinics. 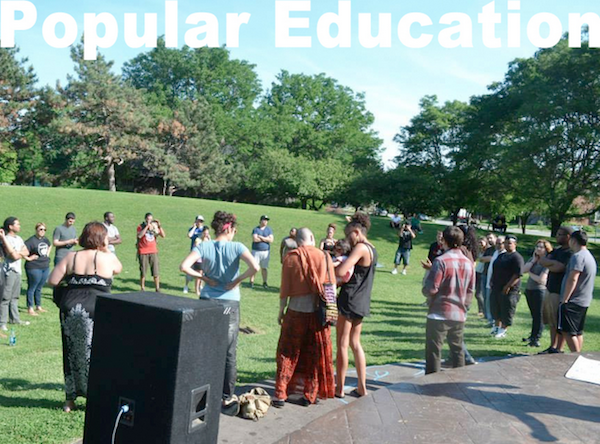 All of the above-mentioned spaces have an element of information sharing. There are, however, some spaces that are uniquely designed for this intent. We call them popular education spaces. The Raiz Up Collective is an awesome collective that comes together weekly to share info on current events, especially as related to the Southwest neighborhood of Detroit. Universidad Sin Fronteras which is organized into 8-week discussion modules, like a college course, is another example of information sharing. The distinguishing factor, however is that everyone in the space is uplifted for their unique expertise on their lived experience. There are discussion facilitators, but the collective knowledge and experience of the group is what is most valued. 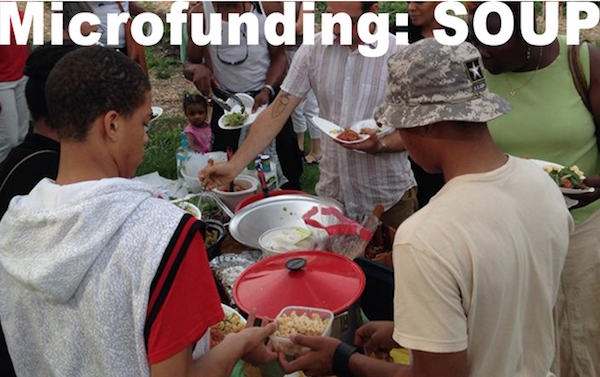 In its fifth year, Detroit SOUP, is a unique potluck-style dinner that promotes community projects through microfunding. Participants show up with a dish or snack, and a donation of $5. There are four pre-selected proposals that are pitched at each dinner. Each of the presenters gets asked questions, and while folks are eating they also vote on which proposal they would most like to back. At the end of the dinner, votes are tallied, and the presenter with the most votes wins the pot of donation money to bring their proposal to life. At each event past winners speak on the progress of their projects. 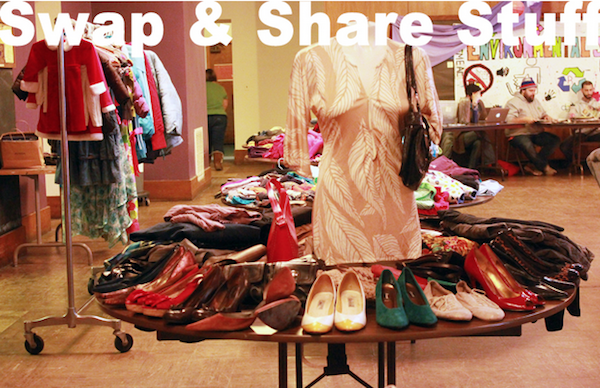 Swaps are happening all over Detroit, as people realize they are a fun way to build community, circulate wealth, meet needs, and save money.

Excited teen swapper Zanyia explains, “There were children from 2, to adults of 60-something odd years getting together, giving their time and beloved keepsakes to someone who would appreciate it more than they ever could. It’s just an amazing experience. My favorite part of the swap is the fact that everybody benefited from it. And culture and stories were shared through what people let go; while sitting around clothes, furniture, kitchen appliances, jewelry and so much more, listening to the ex-owner recollect their favorite memories of your new favorite trousers or piece of art. I mean how often in today's society can a sixty-year-old and a fifteen-year-old swap clothes and look hella nice?” 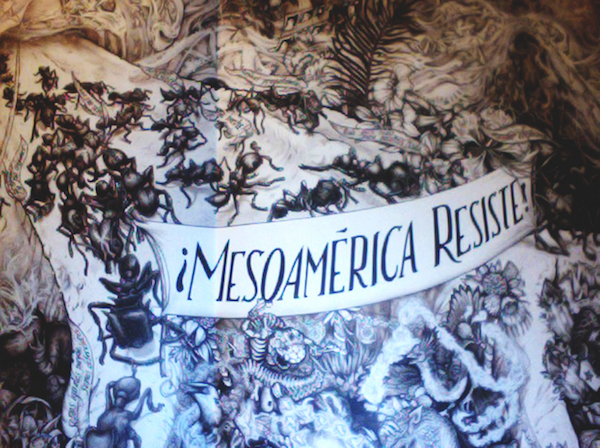 Detail of a Beehive poster, which depicts 500 years of colonialism, corporatism, and resistance in Meso-America

As if that isn’t enough, the Beehive Collective is coming in 2015 to create a graphic poster depicting the power analysis and emergent strategies for solidarity and sharing that exist within the city. The collective will be housed at the Cass Corridor Commons for several months during which time there will be several community conversations intended to gather stories from Detroiters and co-create a people’s narrative in graphic poster form.

I define my life's work as movement into alignment with my highest purpose which is service to my community/family through a contribution of time, knowledge, love, and creative talents which

I define my life's work as movement into alignment with my highest purpose which is service to my community/family through a contribution of time, knowledge, love, and creative talents which are ever-evolving.  I am dedicated to my continual personal positive transformation which I know is the beginning of my community.

+ #detroitwater: creating media that uplifts the voice of the people of Detroit and sharing with our networks to garner solidarity in saying:

water is a human right; moratorium on all residential water shut-offs

water is a commons; no privatization of our water

+ Building solidarity and sharing networks by assisting coordination of national conferences convening in Detroit this year including Roots and Remedies and Re-imagining Work.