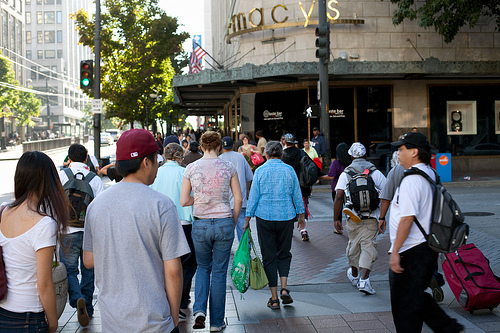 A couple weeks ago I highlighted a list of the World's Six Best Cities for Walking, compiled by a forward-looking tour operator. Not a single American city made the list, which is no surprise given our longstanding national tradition of accommodating automobiles in every way possible.

But it would be a disservice to the U.S.—and the facts themselves—to leave you with the impression that Americans don’t like to walk.  Actually, given a safe comfortable place to hoof it, we are enthusiastic pedestrians.  More and more people want streets that can be shared by motorists, walkers and bicyclists– that's the goal of a growing movement called Complete Streets.

U.S. census data shows 10 cities where at least five percent of people commute to work on foot, according to a story in my hometown newspaper this morning, the Minneapolis StarTribune.

And if the data from Minneapolis rings true elsewhere, an even higher percentage of people are traveling by foot to destinations off-the-job. The StarTribune reports that 13 percent of all trips around town are made by foot, more than double the percentage of trips to work.

Top-Ranking Cities for People Who Walk to Work

(per cent of residents age 16 and older, according to U.S. census figures)

It’s no surprise to see big East Coast cities, whose streets were laid out before the invasion of automobiles during the last century, strolling off with the top 3 spots.

But newer cities of the West Coast and Midwest are also up there—most notably Seattle, which has established the goal of becoming America’s most walkable city. That seems to be paying off, with the city ranking fifth, just behind larger, older places you’d expect to be pedestrian havens.

Even new suburbs want to get in on the fun, despite having been designed entirely around the automobile. The StarTribune story outlines the aspirations of Edina—a classic auto-dominated 1950s suburb with very few sidewalks—to become, in the words of mayor Jim Hovland, “the most walkable community in Minnesota.”  That's a new twist in a city famous for being home to America’s very first enclosed shopping mall.