In a sign of the growing convergence of alternative economic movements, the Degrowth movement’s fourth international conference in Leipzig, Germany, last week attracted more than 2,700 people. While a large portion of the conference included academics presenting formal papers, there were also large contingents of activists from commons networks, cooperatives, the Social and Solidarity Economy movement, Transition Town participants, the “sharing economy,” and peer production.

By my rough calculation from browsing the conference program, there were more than 350 separate panels over the course of five days. Topics ranged from all sorts of economic topics (free trade, business models for degrowth, GDP and happiness) to alternative approaches to building a new world (Ivan Illich’s “convivial society,” permaculture, cooperatives, edible forest gardens).

Degrowth? For most Americans, the idea of a movement dedicated to non-growth, let alone one that can attract so many people, is incomprehensible. But in many parts of Europe and the global South, people see the invention of new socio-economic forms of production and sharing as critical, especially if we are going to address climate change and social inequality.

Some degrowth activists are a bit defensive about the term degrowth because, in English, it sounds so negative and culturally provocative. (The French term décroissance, meaning “reduction,” is apparently far less jarring than its literal transation as “degrowth.”) One speaker at the conference conceded this fact, slyly noting, “But unlike other movements, it will be exceedingly hard for opponents to co-opt the term ‘degrowth’”!

In a 2013 paper, “What is Degrowth: From an Activist Slogan to a Social Movement” (pdf), Frederico Demaria et al. write: “”’Degrowth’ became an interpretive frame for a new (and old) social movement where numerous streams of critical ideas and political actions converge. It is an attempt to re-politicise debates about desired socio-environmental futures and an example of an activist-led science now consolidating into a concept in academic literature.” A new beachhead of this academic inquiry is a book Degrowth: A Vocabulary for a New Era, due out in November.

In many respects, degrowth is more of a gathering space for alternative-economic perspectives than a unified philosophical approach in and of itself. As the book Degrowth puts it, ‘"Simplicity,’ ‘conviviality’, ‘autonomy’, ‘care’, ‘the commons’ and ‘dépense’, the social and ritual destruction of accumulated surplus, are some of the words that express what a degrowth society might look like.” 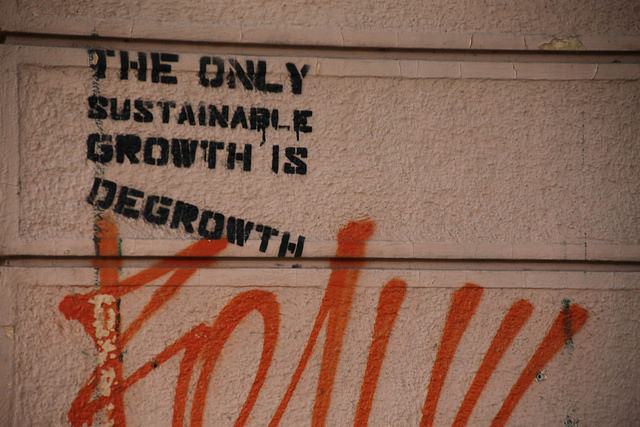 What was amazing about the Leipzig conference from September 2 to 6, 2014, was not just its size but its diversity. Unlike earlier degrowth conferences which were dominated by academics, this conference had a wide range of practitioners and activists as well. It seemed as if many movement had come to the conference because it might serve as a larger open congress of trans-movement, trans-European activists. You can get a feel for the international appeal of the gathering by the simultaneous translations into Spanish, English, and German, and sometimes French.

My colleague Silke Helfrich delivered a terrific talk (in German) at the opening plenary in which she touted the commons as a way to “expand our agency and move beyond top-down politics and the logic of the market.” She also called on peple to “create infrastructure and conditions for new commoning,” with an eye to making commons “as common as shopping."

Despite the different modes of analysis and presentation by alt-economic movements, they do generally share basic values and goals: bottom-up empowerment and governance, reductions in the consumption of resources, an ethic of sufficiency, production for human needs, not for capitalist imperatives. In this sense, this is already a considerable convergence among the movements; it's just that the deeper reality of the convergence is a bit obscure.

Author/activist Naomi Klein gave an excellent plenary talk based on her forthcoming book, This Changes Everything, arguing that climate change makes “radical political change the only option” for survival. Klein is remarkably clear and knowledgeable in critiquing the perversity of neoliberal capitalism, noting that its policy agenda has deliberately sought to sabotage precisely the innovations that we need to deal with climate change (e.g., public investment in climate preparedness, local production of food, mutual ownership of energy and utilities).

But besides calling for grassroots activism – “a blow from below,” as she put it – I found Klein somewhat disappointing on the political and policy solutions that should be pursued. (Perhaps her book is more expansive on this topic.)

My colleague on the Commons Strategies Group, Michel Bauwens of the P2P Foundation, helped filled the void about "solutions" with a wonderful talk about the great promise of open design and manufacturing, and the implications for a new sort of economy.

“Degrowth will only be possible by changing the artificial scarcity-based design practices and engineering of the for-profit sector and by removing the incentive to externalize the true production costs in terms of matter and energy,” said Bauwens. “A commons-oriented approach should combine global open design based in communities, local on-demand distributed manufacturing, and the use of renewable distributed energy. Along with changes in governance and ownership, it can contribute to a global phase transition.”

You can watch Michel’s talk here:

There was far too much going on at this huge, bustling conference for any one person to grasp, so let me cite one other initiative that impressed me. Since March 2014, a group of several dozen German and Austrian techies and activists have collaborated to develop a new participatory online map. The idea is to let people from around the world to “map” their individual alternative economic projects and so make them more visible and accessible to anyone.

Called “Transformap,” the project uses Open Street Map (an open source alternative to Google) and layers of new databases that will let alternative economic projects register themselves on the map along with self-descriptions and access information. The projects will include urban gardens, ecovillages, sharing projects, co-working spaces, co-ops, free harvestable trees in the countryside, FabLabs, and much else. I think Transformap has the potential to be a massively important organizing and communication tool. Its designers hope to complete it by March 2015.

The Degrowth conference may have escaped notice in most mainstream political and media circles, but I feel quite certain that the event helped accelerate the convergence of movements seeking a new socio-economic-political paradigm.