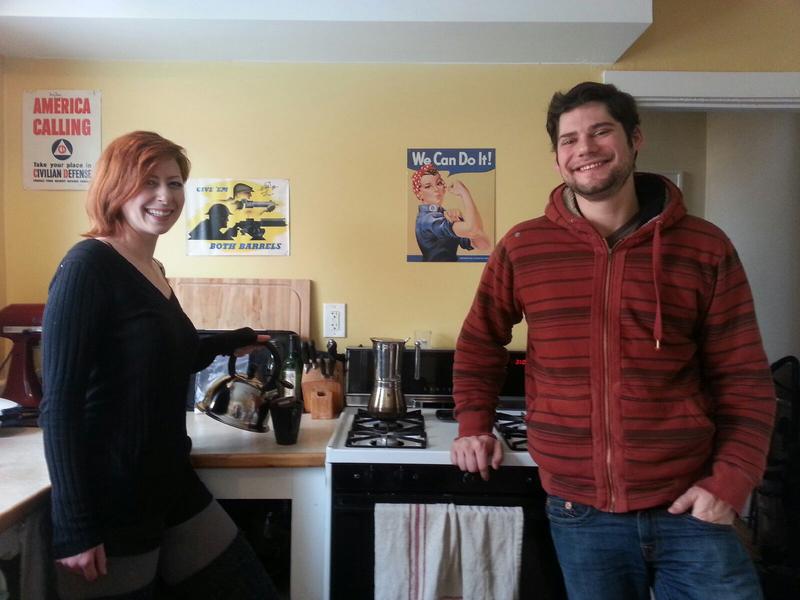 Alyssa and Matt were tired of being gentrified. Pushed out of several neighborhoods in Pittsburgh as the economy there was on an upswing, a year ago they moved away in search of an alternative to the get-a-job and throw your dreams away path. They dreamed of a sustainable urban homestead and found a group of seven other friends to go in on an affordable house in Detroit. Then the plan started to fall apart as they ended up buying the house alone as a couple, leaving them with a mortgage that neither could afford without jobs in a new town with skyrocketing unemployment.

Instead of giving in, they got creative and a friend helped them fancy up their duplex-like home to make one floor into an inn. Another friend in town cued them into Airbnb and it's been as they put it “smooth sailing” ever since. Other plans for the Homestead include a bike rental shop for tourist and repair facility, a farm on the adjacent lots with hoop houses, goats and chickens. Down the street is a metal art DIY space with a forge and all. No wonder Detroit is the place of dreamers and doers with its abandoned lots and frontier-like social experiments.

Matt and Alyssa consider themselves self-employed inn keepers and they say the inn, their primary business, has been growing rapidly and now have several rooms on their downstairs flat that are regularly filled. It pays their mortgage, bills, living expenses, and homestead development costs. Their friend, who runs a “Detroit Loves You” Airbnb inn, donates part of his profits to local nonprofits and still lives off the business as his primary income. In a sense, Airbnb is providing both homes and jobs in Detroit. Now, if only, the large already homeless population could get in on the racket. Any takers?

While in Detroit, I visited the former Occupy Detroit space turned DIY homeless shelter and Voices of Hope homeless choir practice space. It was developed by a former music executive from Los Gatos, California. Jake said the homeless choir just performed at the inauguration. The donated space opened up to them this last Christmas and now has apartments for homeless folks on the second floor and a “warming center” seven days a week where supervised students connect folks coming in off the street with homes, shelters, basic medical care, food and music jams.

Ralph, now 71, volunteers at the center said it's the best thing that's ever happened to him after being out on the streets for about 24 years, he's got an apartment upstairs, reunited with his kids after they saw him on the televised Inauguration and stopped using drugs. The Voices of Hope choir made a CD and Motown Records has approached them. They are a raising funds through Facebook for their utility bills and staffing and also need a volunteer to develop their website.

Another unique homeless support project, called the Empowerment Plan, operates out of a retrofitted, dirt cheap co-working fabrication space (the Pony Ride) that used to be an abandoned auto industry warehouse. It offers professional sewing training and jobs to homeless women to make insulated winter coats that convert into portable sleeping bags for the homeless. Started by a 20 year old college student turned entrepreneur, Veronika Scott put the women to work when the homeless women said more than jackets they needed jobs. So she said, “Great, I need workers to make my jackets.” Director Julie Benac said they are already expert seamstresses that amaze professionals that stop by from the industry.