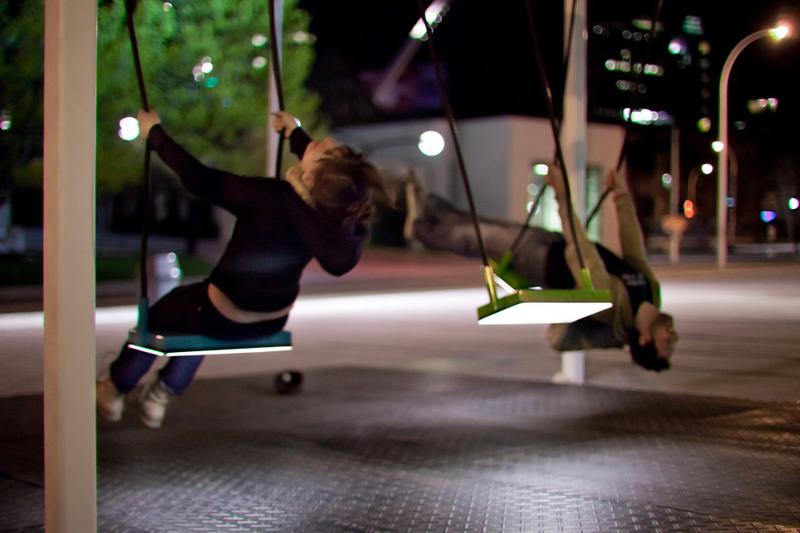 Public spaces serve multiple functions for society and, more and more, they are being utilized in ever-creative ways. In many of these cases, whimsy seems to be at the heart of the matter, even if it is not the main driver. For instance, in a bid to improve public health by encouraging more people to use the stairs instead of the escalator, The Fun Theory (a Volkswagen initiative) transformed a set of Stockholm subway stairs into piano keys — each step a person took played a note. As a result, 66 percent more people took the stairs than the escalator. In another example, a Dutch railway company had a slide installed atop one of the stairways leading down to a station in Utrecht and dubbed it a ‘transfer accelerator.’

Still another project that has cropped up in places like London are streetside swings. Here, the premise was inciting play among adults. In Montreal, a team of designers took cues from both the street swings and the piano stairs to create their 21 Balançoires installation. Daily tous les jours set up 21 musical swings next to a bus stop in an effort to stimulate both ownership of the public space itself, but also cooperation among the passersby who choose to stop and play. Though each swing triggers an independent melody all its own, when moved in unison, the swings render harmonic compositions.

Though it’s not the first exercise in collective experience that Daily tous les jours has created, 21 Balançoires was selected as a winning entry in the 2013 Interaction Awards. Other projects by the team include Rewrite the Year in which 365 actual news headlines were rewritten by text message in a crowdsourced format, Giant Sing Along in which 32 microphones were set up in a field so that people could sing together karaoke-style, and 21 Obstacles in which a pinball-esque video game was projected on the side of a building and played by onlookers using their cell phones.

These are all fantastic examples of how public spaces can generate fun, community, and shared experiences among a city’s citizens. And, in an era where so much around us seems so dark and heavy — from ongoing wars to heartbreaking poverty to catastrophic disasters — splashes of whimsy where we least expect it might be just what we need.