A Shareable Explainer: What is Values-based Banking? - Shareable
Skip to content 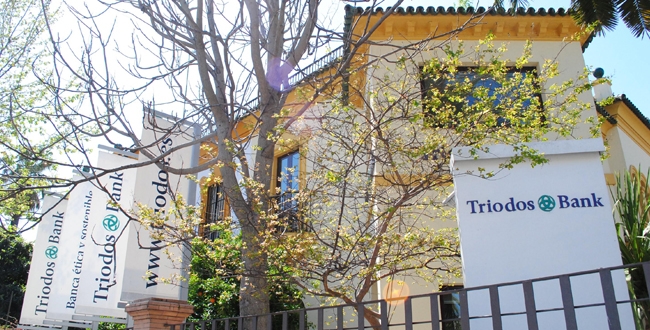 Where we put our money matters — not only for our own financial security but to ensure the wellbeing of our planet. Following the financial crisis of 2009, more and more people have been turning to ethical banking services that value economic, social, and environmental impact.

In 2016, the lending level of banks that prioritized sustainability nearly doubled compared to traditional financial institutions, according to the Global Alliance for Banking on Values, a network of leaders committed to ethical banking practices. Similar figures were seen for deposits. The total income of ethics-based banks grew by 7.6 percent from 2011 to 2015 versus the 0.5 percent increase of the latter. Values-based banking prioritizes people and the planet over profits.

1. What is banking on values?

2. What's the origin of this movement?

4. What are some examples?

What is banking on values?

Also known as values-based, sustainable-focused, and ethical banking, this movement represents all the banks and financial institutions that use money to deliver economic, social, and environmental development. From the outside, these banks are like other banks. They offer a wide range of services, from savings accounts to investment management and venture capital funds. What sets them apart is how they do it — where they put their customers' money, how they manage lending and credit (by providing loans and services to sustainable projects, individuals, and entrepreneurs, and avoiding investing money in the pure financial and speculative economy), how they support their local communities and the environment, and how they treat their staff and customers.

"Banking on values means 'People before Profit.'" Marcos Eguiguren, executive director of the Global Alliance for Banking on Values, says. "Practicing banking in a way in which the priority of bankers is focused on enhancing society and the planet and get profit only as a consequence — a consequence of doing the right things and doing them the right way."

Values-based banking seeks to establish a self-sustaining model of banking that is resilient to outside disruptions, and one that provides transparent and inclusive governance.

What's the origin of this movement?

The global movement for banking on values was born at the beginning of the financial crisis, "when a few pioneers of values-based banking from different parts of the world decided to join efforts and show the world and the financial community that it was possible to do banking in a way in which no speculation is practised, in which banks fully serve the real economy, and do it in a way in which externalities are considered: just positive banking," Eguiguren says.

Eguiguren's organization, the Global Alliance for Banking on Values, was founded in 2009, and has 39 members from values-based banks, banking cooperatives, credit unions, microfinance institutions, and community development banks from five continents. They collectively serve more than 24 million customers, hold up to $110 billion of combined assets under management, and are supported by more than 42,000 co-workers.

What are some examples of values-based banks?

Banks play an important role in our economies because they make money flow. For that reason, it is important to look at what types of projects they support. Is doing good compatible with being profitable? Yes, it is. Values-based banks are amongst the most prestigious and important organizations in their countries, especially in the developing world.

Here are some examples of the banks that are making a difference:

Triodos Bank in Spain is one of the world's leading sustainable banks. It invests only in sustainable companies and is transparent about how it uses its customers' money. It is also a certified B Corp, and it does all this while still being economically profitable.

"Total assets under management grew in 2016 by 9 percent to 13.5 billion euros, and its balance sheet increased by 11 percent to 9.1 billion euros," Sonia Felipe Larios, communication manager at Triodos Bank in Spain, says. "The number of customers increased by 7.4 percent. By the end of last year, Triodos Bank had 652,000 customers across our five European branches."

Banca Etica finished 2016 with an income of 4 million euros and a significant increase in the number of customers (more than 15 percent) and in the number of loans that were granted (more than 12 percent). That does not sound so impressive as its other figures: Over the same year, Banca Etica Group financed 9,000 projects, all in the fields of social and international cooperation, environmental protection, and quality of life.

"For us, profitability means combining economic efficiency, social welfare, quality of life," says Ugo Biggeri, president of Banca Etica Group. "Success means improving the number of people who choose ethical finance and the number of firms that choose to operate in accordance with social and environmental responsibility criteria."

The organization also operates on renewable energy, which covers 98 percent of its needs.

"We do not give any maxi-bonus to our manager," Biggeri says. "We do not accept money that comes back to Italy through provisions of 'tax amnesty' or 'voluntary disclosure.'"

The Global Alliance for Banking on Values has numerous examples of values-based banks that are changing the way we think of finance. Some of them are:

Who is ethical and values-based banking for?

Everyone. That is the greatness of banking on values. It does not matter how old you are, what type of work you do, where you are from — an ethical and sustainability-focused bank will always open its doors for you. And who dislikes knowing they are doing good with such little effort?

What are the main challenges in putting this model into practice?

There are lots of different factors to take into consideration when it comes to analyzing the barriers for banking on values. For one, there are lots of industry interests that influence decision and law-making around values-based finance and banking. While the number of people who are turning to ethical banking is increasing, big banks still weild a lot of power. It can be a challenge to convince large groups of people to embrace ethical banking.

In some countries, however, there are signs this might change. In February 2017, the Italian Parliament passed a law to recognize and promote ethical finance, the first law of this type in Europe.

"It is a formal acknowledgment that does not imply substantial benefits, but it is a very important first step," says Ugo Biggeri, the president of Banca Ética in Italy. "Now we hope that European regulators may do the same. But better rules are not the only thing we need. We hope that more and more people understand that the critical consumption — also in the financial services sector — can actually build a better world."

Money is a form of democracy, even a political act, and each time we open our wallet and pay for a product or service, we are voting for the future that we want to see.

This piece was written by Isabel Benitez, who is responsible for International Media at the New Economy and Social Innovation Forum (NESI Forum), with the contributions from the Global Alliance for Banking on Values (GABV), Triodos Bank, and Banca Ética Group, partners of the NESI Forum.

Shareable is media partner of the NESI Forum, a nonprofit initiative that will bring together change-makers and thought leaders to conceptualize, discuss, and lay the foundations of a new economy, in Malaga, Spain, from April 19-22, 2017.

NESI Forum is the only Global Forum on New Economy and Social Innovation, which brings together the main actors of change and opinion leaders to think, talk and lay the

NESI Forum is the only Global Forum on New Economy and Social Innovation, which brings together the main actors of change and opinion leaders to think, talk and lay the foundations of a new economy, more sustainable, social, based on values and aimed at the common good. It will gather 900 speakers, opinion leaders and change-makers from all over the world in Malaga, Spain, on 19th-22th April, 2016.

NESI is supported by the Global Hub for the Common Good Foundation a think-tank created in 2015 with the vision of boosting a new social, economic and political model geared towards a common good.