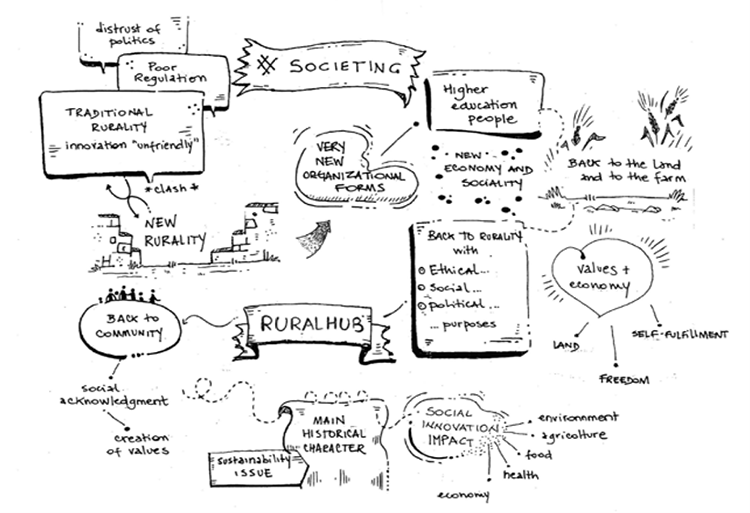 Op-Ed: The English translation for the Rural Social Innovation manifesto was not ready when Alex Giordano asked me to write the preface to it. I agreed expecting the manifesto to be like many I’ve read online, relatively short and easy to digest. I thought I could quickly write an introduction. This was not to be. Alex and Adam have put together an impressive, unique, and in-depth manifesto packed with world-changing ideas delivered in a style that powerfully communicates the spirit of RuralHack and its partners — a rebellious hope that rests on a firm foundation of pragmatism and a love of people and place. Indeed, Rural Social Innovation manifesto is unlike any manifesto I’ve read.

For starters, it’s front loaded with and is mostly composed of a series of profiles showcasing the ideas of the people behind the Italian rural social innovation movement. In this way, it’s like the Bible’s New Testament with each disciple giving their version of the revolution at hand in a series of gospels. It says a lot about this manifesto that the people in the document come first, not the ideas. The gospel of each rural innovator not only transmits important ideas, but gives up to the reader individuals who embody the movement. These are the living symbols of the movement who are not only individual change agents themselves but representatives of their unique communities and their streams of action in the past, present, and planned into the future. This gives the manifesto a unique aliveness. It’s not a compendium of dry ideas. It’s a manifesto of flesh in motion and spirit in action.

To extend the New Testament metaphor, the subject of these gospels isn’t a prophet, but a process, one that is birthing a new kingdom. The process is a new way to run an economy called commons-based peer production. This is a fancy phrase which simply means that people cut out rentseeking middleman and produce for and share among themselves. The time has finally arrived that through cheap production technologies, open networks, and commons-based governance models that people can actually do this.

This new way of doing things is the opposite of and presents an unprecedented challenge to the closed communities and entrenched interests that have for so long controlled the politics and economies of rural towns and regions. The old, industrial model of production concentrated wealth into the hands of the few while eroding the livelihoods, culture, and environment of rural people. It impoverished rural people in every way while pushing mass quantities of commodity products onto the global market. It exported the degradation of rural people to an unknowing public. What’s possible now is the maintenance and re-interpretation of traditional culture through a new, decentralized mode of production and social organization that places peer-to-peer interactions and open networks at the core. In short, it’s possible that a commons-based rural economy can spread the wealth and restore the rich diversity of crops, culture, and communities in rural areas.

It may be the only way that rural areas can attract young people and spark a revival. Giant corporations maniacally focused on mass production, growth and profit are incapable of this. Yet many rural communities still stake their future on such firms and their exploitative, short-term, dead-end strategies. The above underscores the importance of this manifesto.

The transition to a new rural economy is a matter of life or death. The rapid out-migration from rural areas will continue if there’s no way for people to make a life there. The Italian countryside will empty out and the world will be left poorer for it. A pall of hopeless hangs over many rural areas because this process seems irreversible. While this new rural economy is coming to life, its success is uncertain. It will likely be an uneven, difficult, and slow transition if there’s a transition at all. It will take people of uncommon vision, commitment and patience to make it happen. It will take people like those profiled in the coming pages who embody the famous rallying chant of farm worker activist Dolores Huerta, “Si se Puede” or yes we can.