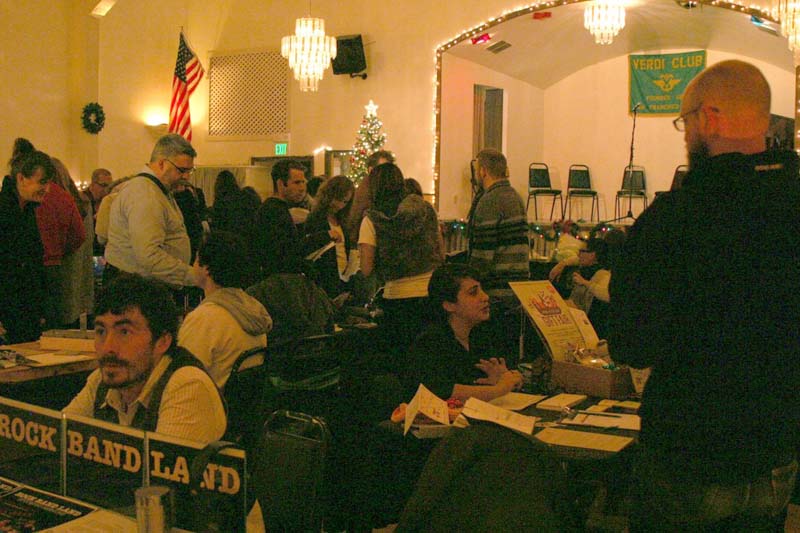 Gretchen Wustrack’s family asked her for a Christmas list. But like many people, she found herself thinking,”I didn’t know what I wanted. I have enough stuff, and so do they.”

Rather than come up with a handful of half-hearted suggestions, Wustrack, a San Francisco designer, asked her family if they would consider exchanging experiential gifts – classes, tickets or certificates for new, hands-on experiences.

“It turned out to be so great for us,” said Wustrack, explaining they continued to talk about the funny anecdotes, new skills and hobbies born from the experiences.

The Wustrack family has been trading experiences ever since, and this summer Gretchen and her long-time friend Lisa Carey, a Bay Area native and marketing consultant, decided to take experiential gifts to the public.

Last week they hosted a cozy holiday bazaar featuring small, local businesses offering everything from bread baking classes and custom tailored shirts to personalized perfumes and a selection of more than 20 other experiences. “A Curious Affair: The Cure for the Common Gift Fare” was held at the Verdi Club in San Francisco.

“Sharing experiences with friends and family trumps getting stuff,” said Carey. “It takes you out of your day-to-day life.”

Psychology professors Leaf van Boven, University of Colorado, and Thomas Gilovich, Cornell University, reported, “Individuals will live happier lives if they invest in experiences more than material possessions … communities will have happier citizens if they make available an abundance of experiences to be acquired.”

Following their 2003 research findings, dozens of papers have been published on the subject, as well as articles and books for the general public. The New York Times recently ran a lengthy feature on the research, and author and life-coach Joe Robinson released, Don’t Miss Your Life, a book exploring the benefits of “participant experiences.”

Wustrack and Carey hope to tap into the wave of interest by turning the experience bazaar into an online marketplace on their website Curiosity Atlas. “It takes a lot of digging to find interesting experiences,” said Carey. “We wanted to create an opportunity to connect people to the place around them. It’s so full of vibrancy and talent.”

The holiday bazaar was a litmus test for Wustrack and Carey, measuring the public’s response to experiential gifts. Based on the happy faces of the roughly 100 shoppers who chatted up vendors, watched 10-minute demonstrations and snacked on sushi and cupcakes, the idea appeared to be successful.

Shopper Michael Silk from Berkeley said he liked the experiential gift idea instantly, “The memory sticks longer than if you give a fruitcake.” He purchased a four-session class on demystifying art hosted by Root Division, a San Francisco community arts organization.

A memorable demonstration came from instructors of kid music group, Rock Band Land, which performed a catchy pop song “Ninja Noodle,” composed by a group of former students during a six-session band class. A Bernal Heights artisan butcher shop, Avedano’s, distinguished its booth by setting out a large, raw leg of lamb. They later used it to demonstrate butchering techniques taught in their classes.

But not everyone was new to the idea of experiential gifts. After all show tickets and massage certificates have been popular presents for a long time. While watching an Adventure Out instructor demonstrate how to start a fire using sticks, shopper Tina Torrens of San Jose said she has been giving experiences for years, ”but there’s never been a market place for them before.”

Perhaps the evening’s most unusual gift was offered by poet Silvi Alcivar, who wrote short, personalized poems on demand. As San Francisco resident Nancy O’Connor paid for three poems written for her friends and family she said, “These are gifts that can set off a light bulb…This should be a regular, once a month event.”

Victoria, a founding partner, editor, and reporter for Way Out West, is native to the Bay Area and has been writing about the environment for 15 years. Her articles have

Victoria, a founding partner, editor, and reporter for Way Out West, is native to the Bay Area and has been writing about the environment for 15 years. Her articles have appeared in Harper’s Magazine, Mother Jones, the New York Times, Audubon, Discover, The Christian Science Monitor and many other publications. But she cut her reporting teeth right here in the Bay Area with an internship at California Wild, followed by a year and a half interning, stringing, and substitute publishing for the Pulitzer Prize-winning Point Reyes Light newspaper in west Marin. She’s also author of Animals and Plants of the Ancient Maya, published by the University of Texas Press in 2002.