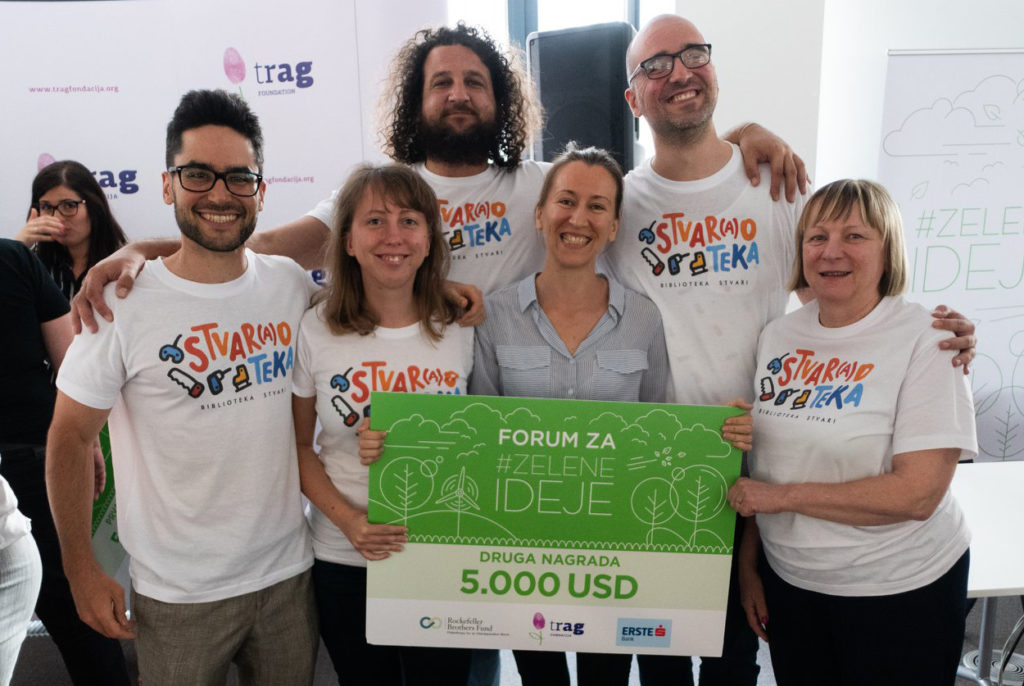 For several years, my husband, Alvaro, and I moved around Europe studying and working abroad. To make our frequent relocations easier, Alvaro and I pared our belongings down to the basics that could fit in a 20 kilogram suitcase. While keeping our travel kits lean made us more mobile, this lifestyle came with a few disadvantages, like when we needed tools and equipment to move into new flats. For lack of a better solution, several times we had to buy new tools and then leave them behind.

During this time, we read about innovative solutions for these problems, such as tool libraries — libraries where instead of books, people borrow tools. Having access to things instead of owning them made much more sense. We loved the new concepts and the practicality of the sharing economy.

One day we found a Shareable article on how to open a library of things. We got inspired and decided to create our own Library of Things in Novi Sad, Serbia’s second-largest city. To make that and other sharing initiatives possible, we gathered a crew of enthusiasts and formed a nonprofit organization we named The Urban Regenerative Sustainability Center (Centar za regenerativnu održivost gradova).

As a first initiative, we organized a MapJam event — where people gather to map out the sharing economy in the city. We successfully mapped the many initiatives that make Novi Sad a sharing city. The first library of things in Novi Sad, known as Stvar(a)oteka, is still in development, but should join the list of active sharing projects soon. If all goes well, we will open it early next year.

Here are a few of the other initiatives that make Novi Sad part of the sharing cities movement:

The main result of the MapJam event we organized was an online map that provides information about the sharing economy, counseling and supportive services, solidarity initiatives and free resources available in the city.

Novi Sad’s youth culture center, known locally as Omladinski centar CK 13 or just CK13, is very popular among young people as an alternative culture venue. It has been active in promoting the solidarity economy through initiatives such as a free shop, swapping events, and food sharing dinners. It’s been hosting Open Kitchen, a food sharing dinner, about 40 times a year since 2010. Each dinner is organized by four to eight volunteers and draws 40-50 people.

The center also makes a wardrobe available for exchanging goods: visitors leave their unwanted things and pick up items they need. Occasionally a flea market party, or Žur buvljak, is organized for stuff swapping.

Novi Sad is flat and not too big, making it perfect for bicyclists of all ages and skill levels. In 2010, an initiative was created to promote cycling and healthy lifestyles as well as to lobby for better cycling infrastructure in the city. One of the volunteer projects of the initiative, Novosadska biciklistička inicijativa, was the production and installation in 2013 of bicycle repair stations accessible and free to use for all citizens. Currently five of them are spread around the city.

Free workouts Đačko (Free treninzi Đačko) is an inspiring skill-sharing initiative. Three friends launched it in spring 2015 to exercise together and support one of them in fighting against an autoimmune disease. They started a Facebook group to organize a small gathering of people who would exercise together outdoors and it grew into a large community gathering up to 120 people per training session. In the last couple of years, several thousand people have joined the free group workouts and hikes in the nearby mountain range Fruška gora. This year, the workout season is on again promoting healthy lifestyles and gathering people for a fun time outdoors.

One of the first initiatives to use online social networks to organize citywide online swapping and promote gift culture was called Just give… Novi Sad. The Facebook group gets up to 100 new posts a day showcasing things not needed by their owners and available to be given as a gift to someone else. It has grown to 12,650 members since it was created in 2014 by the founders of the Culture Exchange café, a popular social business that became a center for the sharing economy for several years thanks in part to its language classes, cultural events, and book sharing features. The café, which is now closed, also included a separate bicycle maintenance space called The Bike Kitchen that offers tools and a place to repair your own bike for free.

6. Board game clubs for everyone

There is a strong gaming culture in Novi Sad. Board game lovers can join any of several clubs: Gaming Centar, Dragon Games, Bar Craft Pub and Gilda Igrača. The clubs organize board game events and provide both the place and board games for fans to share. These locales promote sharing by offering open and free access to all ages.

Since July 2017, the crew of Rethinking (Prerazmišljavanje), a book and literature enthusiasts’ platform, has been organizing once-a-season book exchange events. The first event drew 100 people. After seven book exchanges, attendance grew to over 1,000 and resulted in several thousand books exchanged. This July, book lovers of Novi Sad attended the 8th book exchange that was open to everyone.

Eđšeg Culture Center (The Unity Culture Center) is situated in an old castle constructed in 1890. When the city renovated the structure in 2012, it was converted to a culture center. The center gained importance after Novi Sad was chosen to be the European Culture Capital — a designation that requires a city to commit to strengthening its cultural and creative sectors through public events and other actions — for the year 2021.  In partnership with 190 local NGOs, Eđšeg Culture Center has hosted and organized many different cultural events for all ages: concerts, educational and art workshops, swap events, dances. Eđšeg also offers its space to local NGOs for free and, in February began providing free coworking office space as well.

The Hotbed of Solidarity (The Klijalište solidarnosti) is a new initiative of the not-for-profit Volunteer Center of Vojvodina province (Volonterski centar Vojvodine). With a goal to support people in need and promote solidarity, they organized a pay-it-forward meal program in partnership with five restaurants in the city. Through the program, every day patrons “pay forward” donations that cover meals for neighbors in need.

This piece was written by Ana Novkovic and Alvaro Gonzalez-Roof from The Urban Regenerative Sustainability Center.

The Urban Regenerative Sustainability Center (Centar za regenerativnu održivost gradova) is a not-for-profit organization in Novi Sad, Serbia, initiated in 2018 by a group of friends. CeROG strives to

The Urban Regenerative Sustainability Center (Centar za regenerativnu održivost gradova) is a not-for-profit organization in Novi Sad, Serbia, initiated in 2018 by a group of friends. CeROG strives to improve the quality of life in the community, respecting the environment and values of human rights, interculturalism and neighborly solidarity.