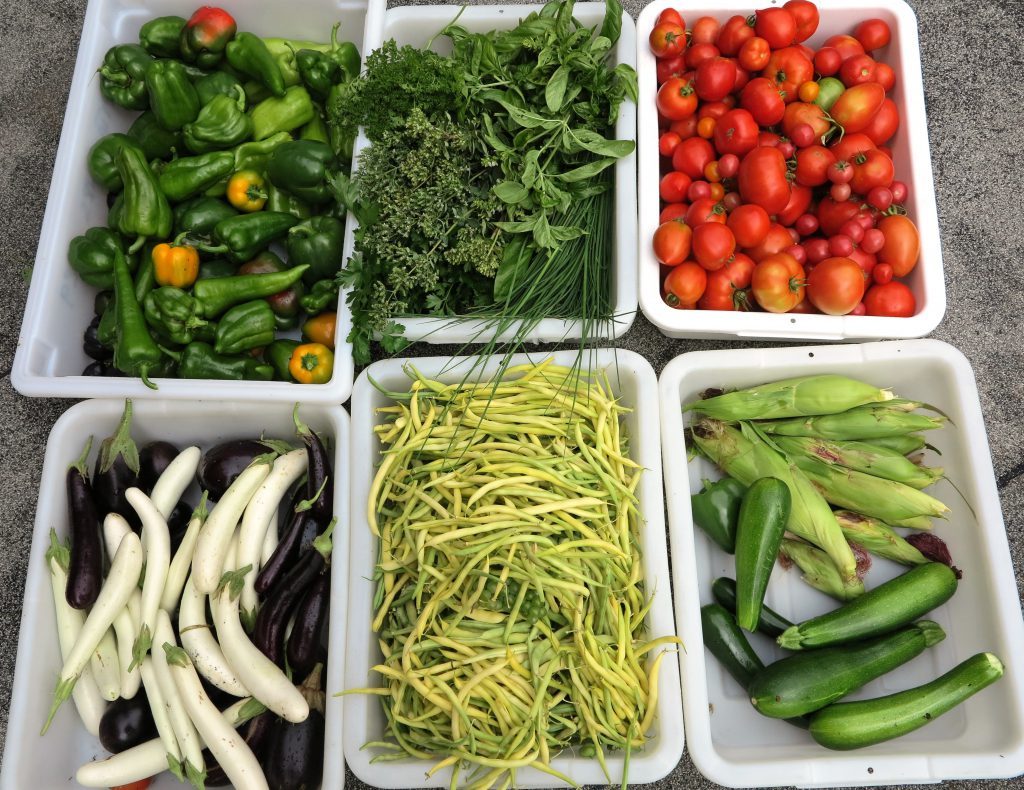 In honor of Canada's 150th anniversary, we're taking a closer look at food security in the country. Canadians are cooking up a food revolution, one community kitchen at a time. Although Canada has one of the highest average standards of living in the world, food insecurity does exist — just ask struggling families in the poorer parts of places like Winnipeg, where young people are stretched between low-wage work and crushing debt, and families struggle in isolated Northern communities, struggling to choose between hunting for meat and working for a living. Fortunately, people from coast to coast are working together towards creating a fair and accessible food landscape. Keep cooking, Canadians, for another 150 years.

1. Got Bannock? in Winnipeg, Manitoba

Althea Guiboche knows what it's like to go hungry. The single mother of seven became homeless after her house was destroyed by flooding in 2010. In 2013, inspired by the Idle No More movement, she began handing out bannock (a dense, yeastless bread popular in First Nations cooking), and homemade chili to the homeless and precariously housed people in Winnipeg's impoverished North End. Got Bannock? started out as a one-woman operation, but the twice-monthly "days of action" now include dozens of volunteers from every corner of the city, who prepare and distribute hot meals for hundreds of people. "I had no idea where this (effort) would be when I started, and now it's like these people are all my relatives. I hug them all, I love them all, I'm here for them, the Bannock Army is here for them," Guiboche told the WinnipegSun as the project celebrated its fourth anniversary. If you're passing through Winnipeg, think about giving them a hand.

Andrea Valle and Kelly Hughes moved to Winnipeg's Centennial neighborhood, one of the poorest postal codes in the nation, and noticed that many of their neighbors weren't getting enough to eat. Hughes built a cupboard by hand and planted it on the edge of their yard, and the couple stocked it with food. Now Winnipeggers come to take, leave, and trade food at all hours — and to make new friends. Inspired by Got Bannock?, Hughes and Valle are working with community members to create copycat cubpoards around town. 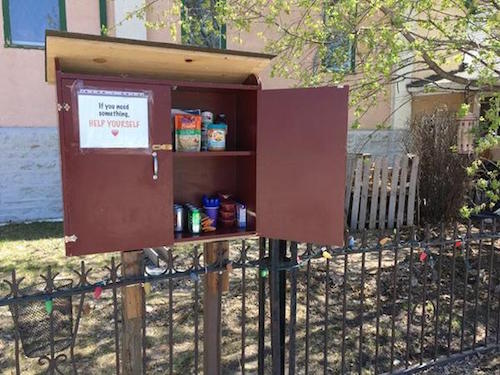 3. The G-Spot in Ottawa, Ontario

Everyone knows healthy food — be it meat, dairy products, or fresh vegetables — is usually expensive food. For university students, rushing from classes to low-wage jobs with or without family support and grabbing food wherever they can, eating healthy may fall by the wayside, often for financial reasons. The Garden Spot, better known as the G-Spot, is based at Carleton University in Ottawa. It's one of several student-organized kitchens across Canada that has been founded in response to a rising student cost of living. "Rising tuition and rent in Ottawa meant that average food budget took a nosedive. Many students literally live on rice and ketchup for weeks at a time, their energy and concentration faltering, and increasingly must rely on coffee and other stimulants to stave off hunger and keep them going," wrote Kelly Fritsch, an early member of the G-Spot collective, nearly a decade ago. The collective has been serving pay-what-you-can, vegan home-cooked meals weekly since 2001. 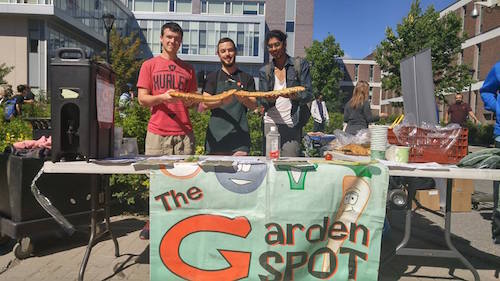 The Collectif de Minuit, based at Université Laval in Québec City, operates with a similar ethos to the G-Spot — providing healthy, vegan, home-cooked meals on a pay-what-you-can basis to harassed and cash-strapped students.

The main difference is where the food is sourced — much of it comes from the dumpsters outside Québec City's Marché du Vieux-Port farmers' market and the dumpsters of other grocery stores, where vegetables and herbs that are left unsold or that don't meet quality standards are often thrown. The vegetables are thoroughly washed with vinegar and often boiled into stews before finding their way onto the plates of hungry students every Wednesday morning.

For more than a century, the vast Catholic church in the heart of Québec City's St-Roch neighborhood has been a gathering place for the neighborhood's residents, many of them poor, elderly, or at risk of homelessness. Every summer, a self-service "food fridge" makes its appearance on the church steps, stocked by volunteers and community members who stop by and drop off leftovers. The fridge was established by four university students.

"At first, I wondered what it was doing there," one local resident told the daily newspaper Le Soleil, in 2016. "It's great. You find meat, fruit and vegetables." The man, who began stopping by regularly for food when money was tight, has since become a volunteer with the project. Local restaurant and grocery store owners have also pitched in, dropping off unsold surplus food at the end of the day.

A unique food-sharing initiative has sprouted on the roof of the Maison de Lauberivière, Québec City's largest homeless shelter. Urbainculteurs, a volunteer collective dedicated to the promotion of urban gardening, started the rooftop garden in 2009. The cabbage, carrots, beans, seasonal fruits, and herbs— more than a ton of production each year — find their way downstairs, into the hands of the chefs who cook three meals a day for hundreds of homeless men and women. The garden is maintained by a group of volunteers including shelter residents, college students, retirees and the occasional school group. Excess plants and seeds are sold to local gardeners on occasional "open roof days."

"They [the Urbainculteurs] saw an empty roof, and our cooks saw a need for fresh vegetables," says Frédéric Lapointe, clinical services co-ordinator at the shelter. "The garden is something that's dear to our hearts." After eight years above the shelter, the garden is currently seeking a new home due to renovations at Lauberivière. Urbainculteurs members also run a free summer garden in front of Quebec’s National Assembly. 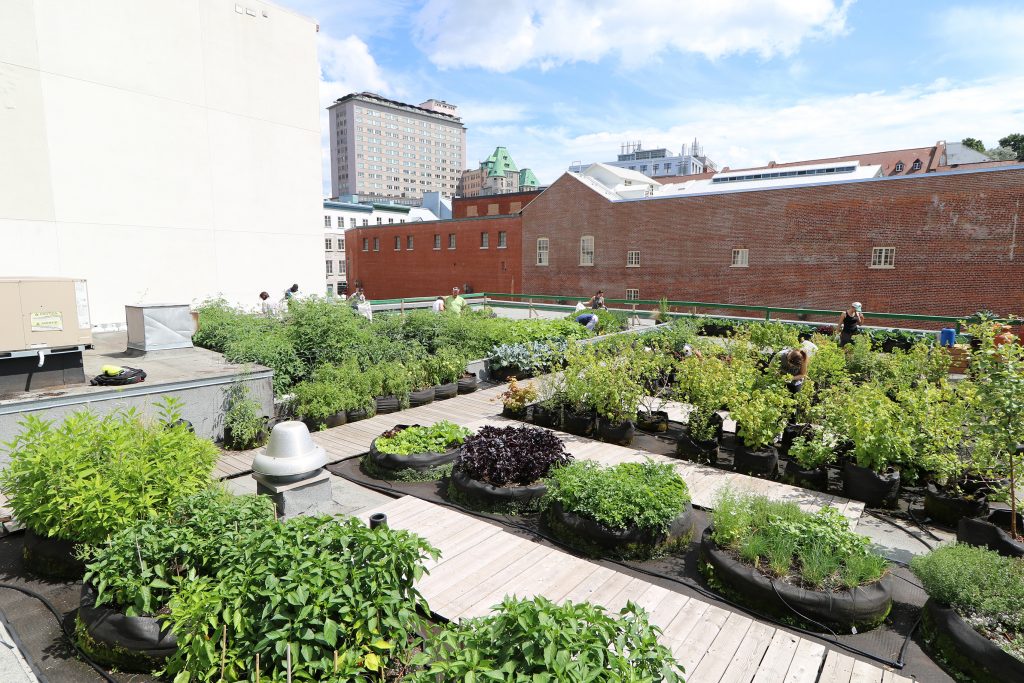 For thousands of years, Inuit communities in far northern Canada lived seminomadically, surviving off of whatever wild game they could hunt. But starting in the mid-20th century, climate change, colonialism, and economic changes had a devastating impact on people in places like Aklavik. Caribou herds shrank and migration patterns changed. The Inuit were forcibly resettled in prefabricated towns and their sled dogs culled by authorities. As demand for seal and fox furs fell and resettlement accelerated, hunters were forced into employment or into nine-to-five jobs, reducing both time and money for hunting.

With fewer hunters, food had to be flown in at exorbitant prices — as much as $38 for a bag of grapes that would cost only a few dollars in the south. As a result, the Aklavik Hunters' and Trappers' Committee and several other groups across the Arctic have established community fridges, where hunters or people who have been fishing drop off surplus meat. The hunters are reimbursed for certain fees and the food is distributed to people in need, following a centuries-old Inuit tradition of delivering one's surplus catch to the elderly and isolated. Canada's largest Inuit advocacy group, the Inuit Tapiriit Kanatami, has launched a food security mapping project to track similar initiatives across the Arctic.

This list is far from exhaustive — in fact, it barely scratches the surface of how Canadians are coming together to increase food security. What's going on where you live? Let us know on Twitter, Facebook, or email: info [at] shareable [dot] net