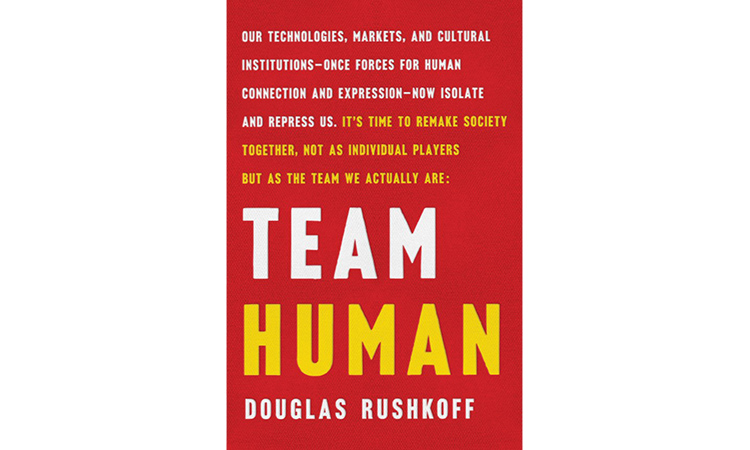 Douglas Rushkoff’s just released book “Team Human” is a passionately argued manifesto “for human dignity and prosperity in a digital age.” Released this week, the manifesto’s 100 points outline the many reasons and ways to”“reassert the human agenda.” In true Shareable style, Rushkoff, a renowned media theorist, podcast host, and author, argues that we should pursue this agenda “not as individual players — but as the team we actually are.” Sharing, cooperation, and community are emphasized in the book as they’re the defining behaviors of our species. He argues through many of the manifesto’s points that cooperative behaviors and collective life should be supported institutionally for humans to flourish. We couldn’t agree more. Some of these points from “Team Human” include:

“Humans are defined not by our superior hunting ability so much as our capacity to communicate, trust, and share. … Early humans had a strong disposition to cooperate with one another, at great personal cost, even when there could be no expectation of payback in the future. Members of a group who violated the norms of cooperation were punished. Solidarity and community were prized in their own right.”

“The economy needn’t be a war, it can be a commons. … The commons is a conscious implementation of reciprocal altruism. Reciprocal altruists, whether human or ape, reward those who cooperate with others and punish those who defect. A commons works the same way. A resource such as a lake or a field, or a monetary system, is understood as a shared asset. The pastures of medieval England were treated as a commons. It wasn’t a free-for-all, but a carefully negotiated and enforced system. People brought their flocks to graze in mutually agreed-upon schedules. Violation of the rules was punished, either with penalties or exclusion.”

“Human beings are not the problem; we are the solution. … To many of the developers and investors of Silicon Valley, however, humans are not to be emulated or celebrated, but transcended or — at the very least — reengineered. These technologies are so dominated by the values of the digital revolution that they see anything or anyone with different priorities as an impediment. This is a distinctly antihuman position, and it’s driving the development philosophy of the most capitalized companies on the planet.”

“People used to believe in circles. They came to believe in lines.” Rushkoff writes, “We are painfully disconnected from the larger cycles of day, night, moon, and season, making it harder for us to witness or identify with the inspiring renewal all around us. Spirituality has become less of a state of being than yet another goal to attain in the future.”

“The beauty of living in a renaissance moment is that we can retrieve… the approaches, behaviors, and institutions that promote our social coherence. … We’re moving from one understanding of our place in things to another. The Renaissance may have brought us our current renaissance is bringing us from individualism to something else. We’re discovering a collective sensibility that’s more dimensional and participatory than the unconsciously formed communities of the past. We had to pass through this stage of individualism in order to get there.”

As Rushkoff told Shareable, “there’s still time to think before we hit the switch and automate ourselves out of existence… and forge solidarity with the others who understand that being human is team sport.”

To learn more about the manifesto, join us at Institute for the Future in Palo Alto, California on Jan. 28, 2019 at 6:00 p.m. for a discussion between Rushkoff,  IFTF executive director Marina Gorbis, and Shareable executive director, Neal Gorenflo. To open the discussion, Rushkoff will give a short talk exploring this agenda and “invite us to remake society toward human ends rather than the end of humans.”