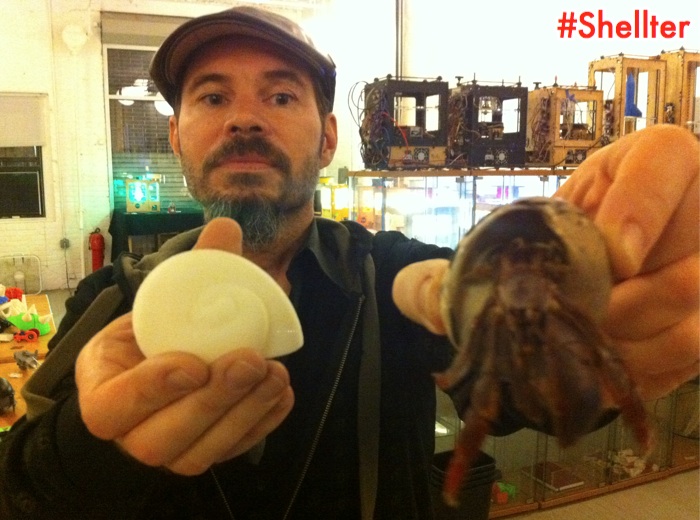 Bre Pettis, a founder of Makerbot, explains on the Makerbot blog:

Hermit crabs don’t make their own shells. They scavenge their homes. And now, hermit crabs are facing a housing shortage as the worldwide shell supply is decreasing. With a shell shortage, hermit crabs around the world are being forced to stick their butts into bottles, shotgun shells, and anything else they can find. This is not acceptable. As a community, we can reach out to this vulnerable species and offer our digital design skills and 3D printing capabilities and give hermit crabs another option: 3D printed shells.

One of the challenges is that no one knows yet if hermit crabs will live in man-made plastic shells. And if they will, what shell designs would make the best hermit crab homes. Makerbot is setting up a hermit crab habitat in their factory to test shell designs shared by the community.

This is an ingenious crowdsourced intervention, and I encourage you to check it out (follow the #SHELLTER tag Twitter). But, a thought – how about we stop destroying hermit crab homes in the first place? Isn't putting too much plastic stuff in the ocean part of the problem?

Some clarification from the Makerbot folks brought up from comments below: