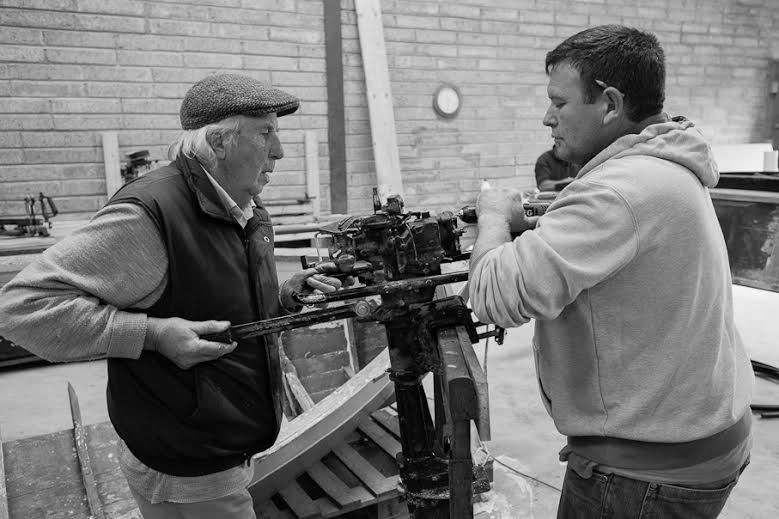 The reward for a lifetime of work, retirement is not always what it’s cracked up to be. Once the initial wave of freedom has been ridden, some retirees feel bored, restless, or even worthless as they have no place to go and a dwindling social circle. The Men’s Shed movement disrupts this pattern for men.

Created in Australia in the mid-1990s, Men’s Sheds are gathering places for men to work on projects, socialize, support each other, do community service and more.

What started as a simple idea in Australia is becoming a global phenomenon. Australia has 1,100 Men’s Sheds with several new ones popping up every week. Ireland is on a similar growth trajectory, but for a different reason. The rest of Europe is just getting started. Bryce Routley, Board Director of the Australian Men’s Shed Association says the sheds, which were formed in response to a lack of support systems for men, provide a sense of purpose.

“Women got together easily and talk but guys never did that way,” he says. “Lots of the guys, when they retire, leave their friends at work and become socially isolated. They get depressed and lack purpose. The sheds help them create meaning, do things for the community, and establish friendships.” He adds that this is all done in a very casual way. “It’s an informal way of promoting health without being threatening to them.” 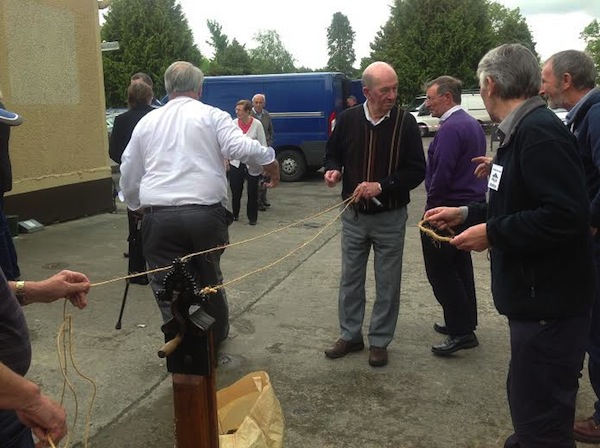 A decentralized movement, there are, as Routley puts it, no “McSheds.” Though the sheds may be inspired or informed by the person organizing them, they are a reflection of their “shedders,” the men who work in them. He explains that when he started a shed in Pooraka, South Australia, there were three men who all built trailers, so their shed started fixing trailers.

“It’s really important to connect with the guys and what they want to do,” he says, “and not just [do] what the organizer wants, or else it will fall over.”

In Australia, the average age of a shedder is 65. But when the movement was adopted by Ireland, a country experiencing massive unemployment, the average age dropped to 35. Eimhin David Shortt, a community organizer in Ireland who works with Get Local and the P2P Foundation, says that, due to a struggling economy and subsequent suicide rate that is among the highest in Europe, there is a very different Men’s Shed demographic in Ireland.

“You have a lot of unemployed, disenfranchised, disempowered people in Ireland at the moment with the economic downturn,” he says. “You have a lot of people out of work who’ve gone from skilled positions to being at home with no viable prospects.”

The Irish Men’s Sheds Association offers a new, creative outlet empowering the unemployed. In addition to providing a safe space for men in the community to share skills and work on practical projects, the sheds also provide a third space for men that is not the pub.

“A prevalent stereotype is the idea of Irish people as kind of happy drunks,” Shortt says. “In Ireland, the pub used to be the public house, the social space. Alcoholism has developed out of that, out of a lack of social spaces. What the Men’s Sheds are doing is providing this notion of a third space for men in Ireland, based on the Australian model.” 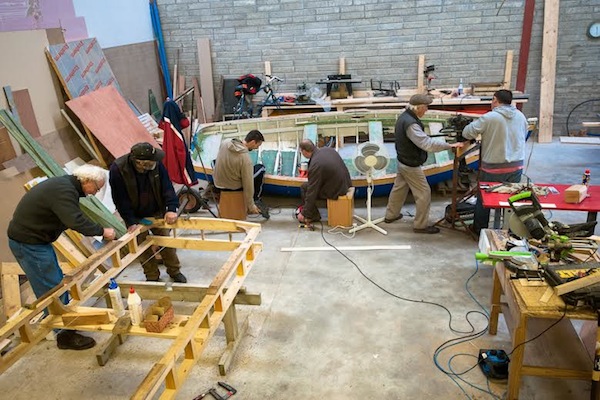 In Ireland, sheds are being created at a rate of three to five per week. This kind of growth demonstrates that there is a real need for and high interest in these types of spaces. But like Routley, Shortt says that the personal- and community-wellness aspects of the sheds are often downplayed.

“Most people working in the sheds don’t see themselves as being involved in community development from their immediate perspective,” he says. “Sheds are sort of an incognito community education and development space where people who are disempowered or disenfranchised come along with ideas, and by putting them into action, they get a sense of action, a sense of agency back, a place for their own voice.”

As in Australia, the Irish sheds take on the identity of their members. There are sheds that serve as places to patch boats and fix fishing nets, sheds located on small plots of land and some found in castles and on estates.

Shortt points out that with the rise of distributed manufacturing, including open source software and hardware, Men’s Sheds organizations serve as “distributed makeries” that can address various issues of climate change and energy efficiency.

“You have a lot of people who have skills, who the traditional labor market seems to have failed,” he says. “They’re self-organizing in a very grassroots way and they’re iterating at three to five new spaces per week. Add to that mix open source designs and the capacity for distributed fabrication…and you get a very interesting model to regenerate labor in this country.” 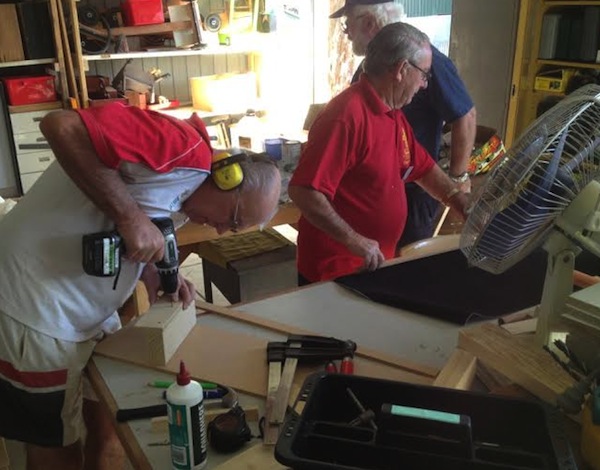 Men’s Sheds are run by a variety of organizations including nonprofits, community centers, church groups, councils, education facilities and more. One common challenge that the Men’s Sheds in both Australia and Ireland face is securing stable funding. Routley points out that funding for sheds in Australia is limited and it varies from state to state. “West Australia puts lots of money into Men’s Sheds,” he says, “but South Australia is broke and it’s very hard to get any money.”

In Ireland, where the movement started over three years ago, Health Services Enterprise grant funding for the Men’s Sheds Association has more than doubled from €20,000 the first year to €50,000 today. But with over 200 sheds and a growth rate of three to five sheds per week, relying on grant money is unsustainable.

“There’s a clear need for getting beyond this grant-by-grant model that isn’t really sustainable,” says Shortt. “An organization can only move for so long from grant to grant to grant.” 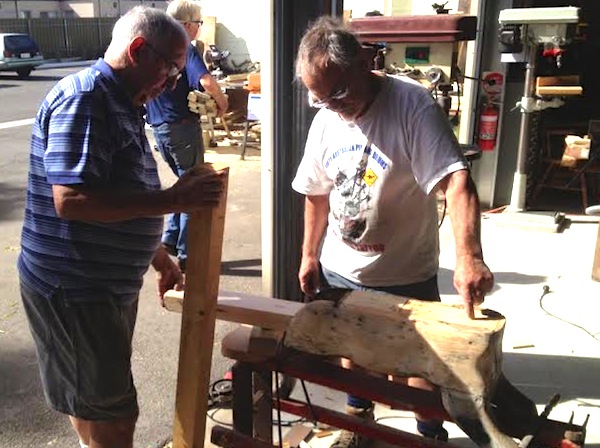 One Side of the Fence

When I ask Shortt what the response from Irish women has been to the Men’s Shed movement, he laughs and says the question is inevitable because it “couldn’t be more clearly one side of the fence and not the other.”

He says he recently asked a book club of 12 women sitting around a kitchen table what they thought about this organization that was so one-sided.

“I don’t know whether it was a particularly Irish response,” he says, “but they said that women are more inclined toward self-organization but that men have this ‘be strong’ ethic, that you have to be self-reliant and do it on your own, not look for help. These women saw it as a great initiative in that it facilitates men to get together in these spaces and do their thing.”

Putting the Pieces Together

The motto for the Irish Men’s Sheds Association is “Men don’t talk face to face; they talk shoulder to shoulder.” This gets at the heart of the movement that is about giving men a safe place to share their emotions and thoughts as much as it is about working on projects. The sentiment is shared in Australia.

“If we’re doing something,” says Routley, and [the men] start chatting off on a subject, we don’t worry if they’re not getting the work done because them talking is the most important thing.”

Both Routley and Shortt stress that the potential for Men’s Sheds is vast and that, even with the movement’s phenomenal growth rate, it has barely tapped into its potential to bring men together around purposeful activity, community, and well-being. By doing so, sheds become hubs that contribute to the community and draw out the unique qualities and strengths of the shedders.

“Every bloke that comes into the shed is a unique jigsaw puzzle piece,” says Routley. “They’re all a different shape according to their background, their work history, their personal values, their mental and physical health and their interests. The job of the shed is to actually fit these pieces together.”

Top photo: In Ireland, due to massive unemployment, the average age of the shedders is 35. Photo: Irish Men's Sheds Association. Follow @CatJohnson on Twitter