Work and the Open-Source City - Shareable
Skip to content

One chilly Wednesday afternoon in late May, I joined a small group of technologists, researchers, architects and urban planners on a field trip through Lower Manhattan and three distinct neighborhoods in Brooklyn to get a glimpse of the future of work. The trip was organized by Todd Sundsted, an entrepreneur and co-author (with Drew Jones and Tony Bacigalupo) of the book I’m Outta Here! The group met around mid-day at New Work City, one of Manhattan’s first “coworking” communities. The space, located on the 5th floor of the building adjacent to the famous music venue Sounds of Brazil (SOBs) on the corner of Houston and Varick, officially opened to members in November 2008.

Coworking is rapidly emerging as a meme for the reorganization of knowledge work among entrepreneurs, programmers, writers and even, as we learned during our visits, sustainable furniture designers. The majority of discussions of the social implications of the Internet on the evolution of work and cities revolve around concepts such as the virtual office, online collaboration, and telecommuting. But, coworking communities (and related phenomenon that have grown out of the culture of the open source movement such as MeetUps and BarCamps) illustrate the ways in which these emergent forms of organizing are deeply embedded in physical places and, at the same time, enabled by new technologies such as laptops and wireless networks.

As the material artifacts of offices – messages, documents, photos and plans – are digitized and stored on servers, physical spaces have the potential to become increasingly open, flexible and sharable. Data security concerns aside, one can imagine a future scenario when most of the tools that we need to work effectively will be accessed and stored in “the cloud”. This allows the dynamic reorganization and co-location of people, firms and activities that have been separated since the early days of industrialization, the advent of the hierarchical firm and the rise of cities themselves. For example, an office building might house a conference room that doubles as an entertainment room for the co-located apartments. Such arrangements will require new ways of thinking about private and semi-private spaces, trust and security, and ownership and property.

Rather than lonely, pajama-clad programmers holed up in Grandma’s basement, a closer look at the nature of virtual work reveals that after several years of experimentation — ranging from working from home in relative isolation to slouching uncomfortably at Starbucks — mobile workers (including freelancers, the self-employed, remote workers and entrepreneurs) have begun to band together to form office communities of like-minded coworkers whom they don’t actually work with, but rather, they work alongside in order to “cross-pollinate.”

This cross-pollination comes in many forms, from the informal, water-cooler conversations about the last episode of Battlestar Galactica to intensive lunch meetings about bookkeeping for freelancers, and from quickly troubleshooting a Google Calendar feature to collaborating on events and projects. For example, while New Work City hosts regular workshops for technology entrepreneurs, it is also a hub for Open Government meetings.

In late January, on a trip to Kansas City to meet with the Kauffman Foundation, I stumbled into a Panera Bread directly across from my eco-friendly hotel in order to get some lunch within hours after landing. After devouring a bowl of chicken soup in one corner of the nearly-empty restaurant, I noticed two women and a man poised in front of their laptops with a small pink rectangle sign on the table that announced “Creative Club” in large letters and “Jelly” in smaller letters underneath. 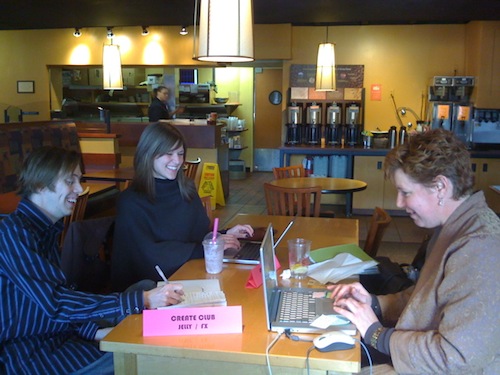 Jelly, founded by Amit Gupta and Luke Crawford in New York in February 2006, is a semiweekly casual coworking event that typically meets at someone’s apartment. It was only their second meeting, but nonetheless, to the surprise of the Kansas City group (a graphic designer, a public relations professional and a sustainable design consultant), I instantly recognized their effort and documented it as part of the larger coworking phenomenon. I presented it the following day at Kauffman.

In his work on social innovation and creative communities, Italian designer Ezio Manzini, presenting as part of the Stephan Weiss Visiting Lectureship at Parsons in early May, makes the point that small, locally-based initiatives such as co-housing have an unprecedented ability to scale globally. As such, the local is no longer an isolated, provincial village that seeks to return to the past but rather a connected cosmopolitanism according to Manzini.

In search of these small but scalable social innovations, our group squeezed onto the B train to Newkirk Avenue in Brooklyn where we visited Ditmas Workspace, a coworking community for writers and researchers located on a “Am I really in Brooklyn, New York?” street lined with large Victorian houses garnished with expansive flowerbeds and trees. Interestingly, Victorian houses are not subject to the zoning requirements that separate residential and office uses of the built environment. This has allowed the 12 members of Ditmas Workspace, half of which are full-time employees working remotely and half of which are freelancers, to create an affordable workspace of like-minded colleagues in the neighborhood where they also live and raise their young children. 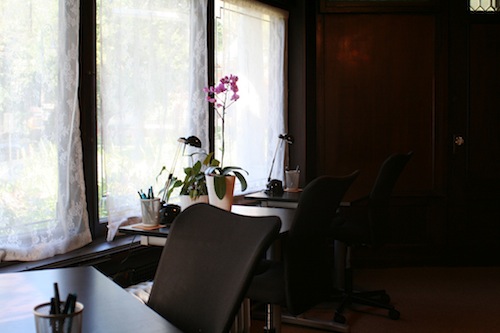 Liena Zagare, an urban planner who founded the Ditmas space in September 2008, emphasized the benefits of the cross-fertilization of ideas and the synergies that take place in the community as well as the need to separate “quiet work” like writing with “loud work” such as doing phone interviews, which they do through the designation of specific rooms for these dissimilar activities.

Our next stop was to Treehouse Coworking, a community for designers in downtown Brooklyn. There, Matt Tyson, a sustainable furniture designer at EcoSystems, which is currently located on the fourth floor, guided us through all seven floors of the building. We climbed top to bottom one cold, dark and dusty stair after another since we had exceeded the elevator’s carrying capacity. The building is completely and meticulously filled with art, objects, antique furniture, old mattresses and junk collected over 27 years by the owner. In describing his motivations for opening the Treehouse space to the coworking community in January 2009, Tyson said, “I want to be surrounded by really smart people…I have a strong affinity for community.” Treehouse will soon be offering classes at their woodshop in order to train people interested in learning new hands-on skills, a boon in the ailing knowledge economy. 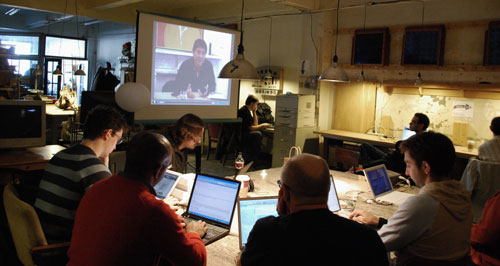 Coworking is rapidly emerging as a meme for the reorganization of knowledge work among entrepreneurs, programmers, writers and even, as we learned during our visits, sustainable furniture designers. The majority of discussions of the social implications of the Internet on the evolution of work and cities revolve around concepts such as the virtual office, online collaboration, and telecommuting. But, coworking communities (and related phenomenon that have grown out of the culture of the open source movement such as MeetUps and BarCamps) illustrate the ways in which these emergent forms of organizing are deeply embedded in physical places and, at the same time, enabled by new technologies such as laptops and wireless networks.

All this talk of cross-pollination and social innovation throughout the day recalled a very different experience that I’d had several weeks earlier while away at a Pervasive Computing conference in Japan. While I had survived the rigorous one-hour swine flu quarantine procedure resembling a scene from The X-Files complete with men in green cover-ups, goggles and masks that scanned the passengers with a thermo-sensing camera, I had failed to reserve a hotel with Internet access.

While at the Asakusa Shrine in Tokyo, I noticed that I was dangerously close to the limit on the 20 MB data plan on my iPhone 3G and sought out the nearest Internet “café” (if one could call it that). I would, I had decided, call AT&T on Skype in order to upgrade to a bigger data plan. However, upon entering, I was told by the attendant at the counter that I was not allowed to make calls while in the café. In addition, only one person was allowed to accompany each laptop computer into the space.

Rather than spaces for mobile work, it is well-known that many of Japan’s Internet cafes are, in effect, living spaces for the country’s unemployed youth who have taken to holing up in private Internet cubicles about the size of an English telephone booth but without the distinctive red paint. The 24-hour cafes come equipped with instant ramen and vending machines, rows of pink comic books and showers; they even sell toiletry sets containing combs and shower caps for 160 yen in the women’s restroom so that their guests can freshen up in the morning.

But, rather than sites for community, collaboration and innovation (though I can’t claim that these qualities are completely absent after only a one hour visit), the spaces remain absolutely silent and devoid of social interaction, perhaps so as to not disturb the patrons that are sleeping? In the end, I found – to my utter surprise – that AT&T had finally created a page that allowed me to add and remove international data plan features without suffering through a redundant twenty minute conversation with a customer service representative. Problem solved, and without uttering a single word.

Back to Brooklyn. We ended the day, which was actually quite exhausting after all of the stairs at the Treehouse space, at The Change You Want To See Gallery in Williamsburg. Again, the conversation shifted to the importance of opening their space to coworking as a way of enabling collaboration on media interventions by artists and activists.

As we redesign our cities with these emergent open source models for the reorganization of knowledge / work in mind, we might ask ourselves about the changing nature of our relationship to our work that is reshaping our identities, loyalties and communities. In the future, New Yorkers won’t ask “What do you do?” over pints of German beer and currywurst in the East Village but rather “Where do you work?” Rather than merely a place to do work, the choice of a like-minded coworking community with the right amount of diversity and exposure to new skills and ideas could be as important as choosing a neighborhood to live in.

Republished (under Creative Commons) from UrbanOmnibus, a project of Architectural League of New York.

Laura Forlano is a writer, researcher and consultant based in New York City. Currently, she is a Postdoctoral Associate in the Human Computer Interaction Lab at Cornell University. In 2008-2009,

Laura Forlano is a writer, researcher and consultant based in New York City. Currently, she is a Postdoctoral Associate in the Human Computer Interaction Lab at Cornell University. In 2008-2009, she was Kauffman Fellow in Law at the Information Society Project at Yale Law School. Forlano received her Ph.D. in Communications from Columbia University in 2008. Her dissertation, “When Code Meets Place: Collaboration and Innovation at WiFi Hotspots,” explores the intersection between organizations, technology (in particular, mobile and wireless technology) and the role of place in communication, collaboration and innovation. Forlano is an Adjunct Faculty member in the Design and Management department at Parsons and the Graduate Programs in International Affairs and Media Studies at The New School where she teaches courses on Innovation, New Media and Global Affairs, Technology and the City, Technology Policy, Sustainable Design and Business Ethics. She serves as a board member of NYCwireless and the New York City Computer Human Interaction Association. Forlano received a Master’s in International Affairs from Columbia University, a Diploma in International Relations from The Johns Hopkins University and a Bachelor’s in Asian Studies from Skidmore College.