Why I Started a Coworking Space - Shareable
Skip to content 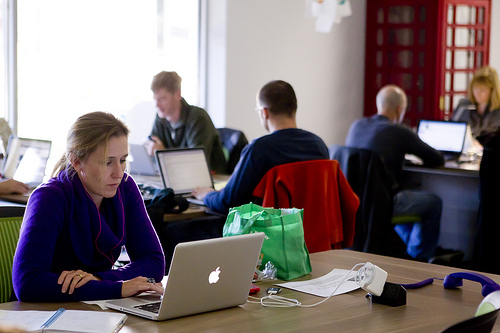 In 1999, I moved to Atlanta, Georgia to do outside sales for Dell. I was replacing a seasoned sales executive on a large account with great potential. Early on in my training in 2000, he took me to the 191 Club in downtown Atlanta. The walls were dark wood, I was the only female in the club that day, and there was an elderly African American gentleman shining shoes. It felt like the Confederacy was still alive and well. It was unappealing, dark, and depressing.

A year or so later I took a trip to New York for business and stayed at the W Hotel. I was in love at first sight. The W Hotel lobby was unique, clean and modern. I loved the lobby buzz and enjoyed working in it. I had an epiphany that this was the kind of environment I’d like to work in!

Fast forward about seven years. I’m now the seasoned sales executive on that same account. I’m at the only Starbucks in Alpharetta, Georgia, tucked inside a Barnes & Noble. I’ve come early to secure a spot by the only electrical outlet. I’m surrounded by my competitors and customers at tiny, uncomfortable little wooden tables and chairs crammed into the space. Starbucks was pushing their CD sales at the time and was blaring show tunes (I hate show tunes). Little Suzy was pitching a fit and crying, while her weary mother tugged her past my chair because she didn’t get the garish frosted butterfly cookie they were selling that summer day. I was paying for Internet access, drinking burnt expensive coffee and explaining to an executive from my company that he should speak in hushed tones and not mention the customer name, the project or discuss the numbers in the multi-million deal we were attempting to close. We needed to discuss sensitive stuff like the political climate, the players, the products and what we needed to do to close the deal that day. He said something to the effect of, “how the hell are we supposed to have a conversation?” I took stock and thought to myself…what the hell am I doing? There has to be a better way.

The following Spring I was sitting in a packed amphitheatre listening to Michael Dell address the crowd. I had another epiphany. Michael would never sit in my seat and work for someone else. If I wanted to make a name for myself, I had to stop working for someone else. I was basically already running my own business that I had grown from $3 to $40 million. I had my own profit and loss responsibility and I understood business. I realized that if I wanted to take control of my destiny, I had to get out of my comfort zone and take some risks. I was petrified to leave – and not just because of the steady income and benefits – but also because my friends, mentors and life had been about Dell for almost 15 years. I turned to one of my best friends and told him I was quitting.

I did leave Dell. I spent a wonderful year in Italy, one of dreams, and then moved to Austin to open a coworking space. When I moved to Austin, I didn’t even know that a movement was well underway and actually had a name – coworking.

I opened Link Coworking on September 10, 2010. I took a slightly different slant and focused on a demographic that coworking spaces typically had ignored – the 30 to 40 somethings married with kids and hopefully a dog at home (they bark during conference calls). Everyone always asks what my members do for a living. Everyone wants to put them into a pretty little box and tie it with a bow.

The other unique thing about Link is that it doesn’t matter what you do, what matters is what you need. What I knew members needed was a place they could pull up to easily, park, walk in, pour a cup of excellent free coffee, sit in a chair that wouldn’t cut off their circulation, plug in, connect and get to work with minimal distractions. I wasn’t focused on what people actually do. I was focused on what they needed. It goes way beyond the physical. When people spend just one day at Link I often hear them say that they got more done in one day than they did in the past 3 days. Then if they stay just a little bit longer, the serendipity will start to kick in. Members look for connections and find them almost instantly. They support each other, bounce ideas off each other, proof read each others’ work, form a community, and start to share their lives.

This philosophy has attracted an extremely diverse and unique membership. We have lawyers, a pastor, entrepreneurs, corporate stow-a-ways, and small business owners. We also have perhaps the largest contingency of women coworkers in the world. We are currently planning to expand our existing location and also looking to open another location in South Austin.

Link Coworking is also producing and hosting the Global Coworking Unconference (GCUC) Conference March 8th, 2012 in Austin at the AT&T Conference Center. Last year, Loosecubes realized the need for a formalized gathering and produced the “Coworking Unconference”. This past summer I was on the phone with Anna Thomas from Loosecubes and Angel Kwaitkowski from Cohere. They asked if I would be willing to take over the conference since I lived in Austin and was clearly into hosting events.

I was happy to oblige. I immediately went looking for space since I knew that it would be difficult to find one since SXSW is held the same week we wanted to do the conference. I was very lucky to get an amazing venue on the UT campus. I was also blessed to have my partners from Turnstone immediately agree to be our premier sponsor. They have been with us in the planning stages and are a key part of making GCUC happen. We didn’t let Anna completely off the hook either – she is a key contributor this year along with Iris Kavanaugh from Next Space. In true Coworking fashion, we’re collaborating and utilizing our community and shared resources.

One of my favorite things about being a coworking owner is the community that has formed among the Coworking owners. I have friend in every nook and cranny of the world thanks to coworking. My travels to a new city will always begin in finding the coworking space so I can learn what my next adventure should be in exploring a new city. Coworking isn’t just a physical space, it’s a sharing of ideas, of lives, and choosing how and where to work. I wouldn’t have it any other way.