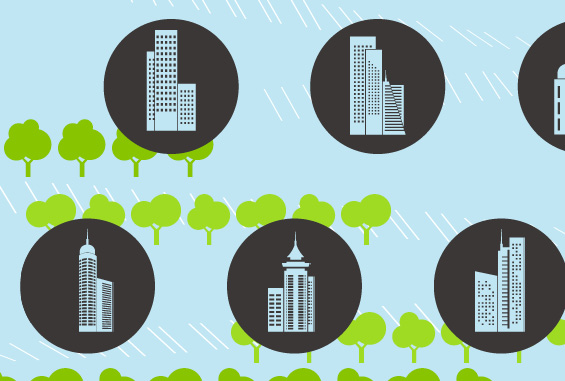 In the immortal words of Homer Simpson: Cities are the cause of, and solution to, all of life’s problems.

That’s the argument of a new animated infographic from the climate change leadership group C40 Cities:

To get the full effect, visit the animated version of the infographic here.

Cities consume massive amounts of energy — more than two-thirds of the worlds’ total. And they’re not going to stop growing.

But the density of urban living creates opportunities for sustainability. And often, mayors and other city leaders have the autonomy needed to implement bold environmental initiatives. By sharing ideas and taking action in a collaborative way, cities can protect themselves from climate change threats — and lead the world to do the same.

There’s a powerful cautionary tale on TomDispatch.com this week, about Phoenix, Arizona: a city “squarely in the crosshairs of climate change.” William deBuys writes:

[Phoenix] "crams 4.3 million people into a low bowl in a hot desert, where horrific heat waves and windstorms visit it regularly. It snuggles next to the nation’s largest nuclear plant and, having exhausted local sources, it depends on an improbable infrastructure to suck water from the distant (and dwindling) Colorado River.

Phoenix — not a C40 city — calls itself an “environmental leader” on its government website, and lists modest goals, such as a five percent reduction of greenhouse gas emissions from city operations by 2015.

But deBuys suggests Phoenix could be made uninhabitable in as little as ten years by drought and, significantly, by a lack of collaboration:

It is a truism that communities that do not pull together fail to surmount their challenges. Phoenix’s are as daunting as any faced by an American city in the new age of climate change, but its winner-take-all politics (out of which has come Arizona’s flagrantly repressive anti-immigration law), combined with the fragmentation of the metro-area into nearly two dozen competing jurisdictions, essentially guarantee that, when the worst of times hit, common action and shared sacrifice will remain as insubstantial as a desert mirage.

The growth of cities has not been all good by any means: Urbanization, driven by globalization, has created unimaginable new problems in recent years (and for decades). It may be premature to celebrate cities for undoing a small amount of the damage they have caused.

But if the initiatives that make cities more sustainable (public shared green space, public transportation, and stronger social networks for collaboration) also make them more collaborative, then that may be reason enough.