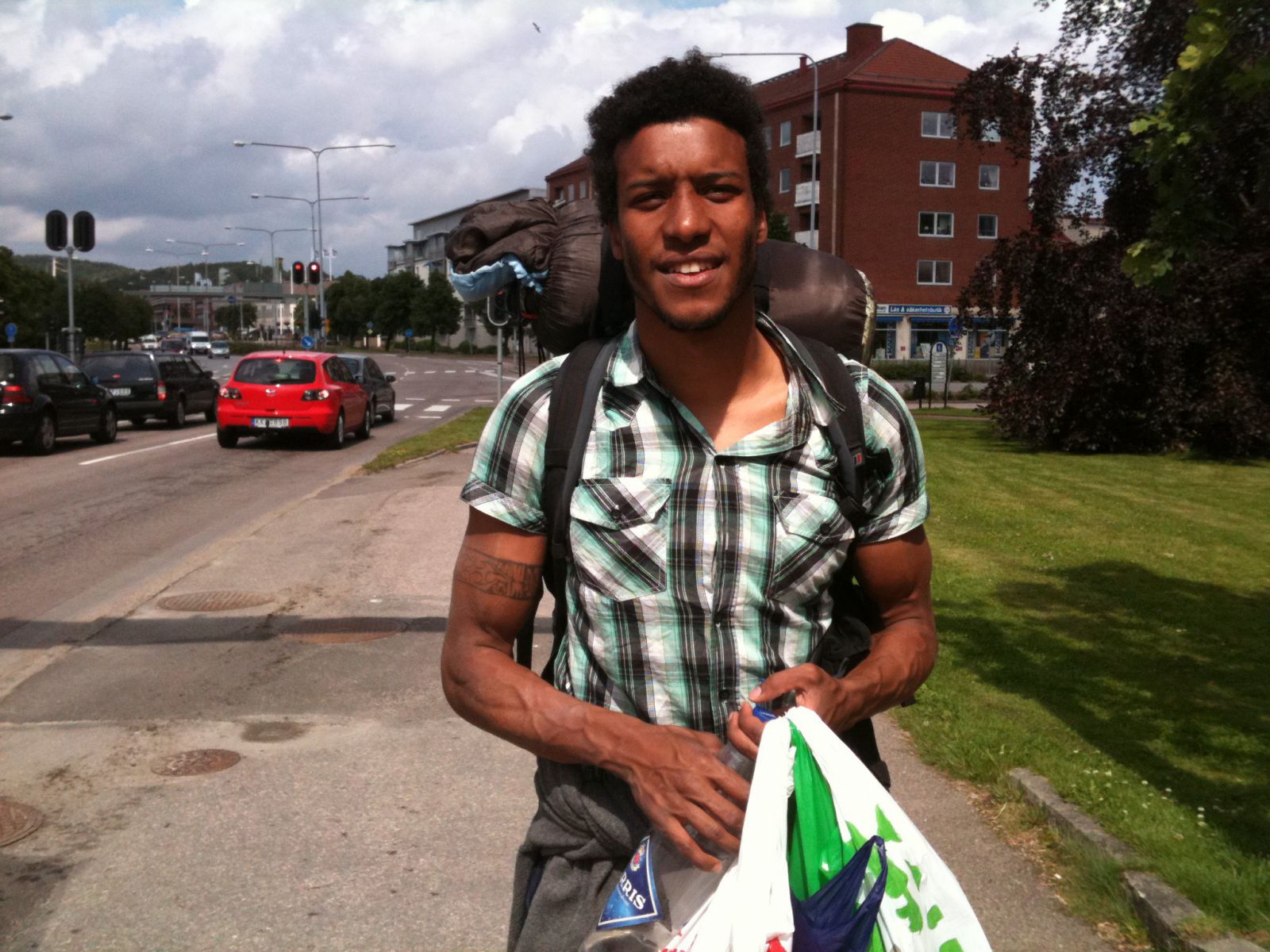 Ibby Okinyi walks and blogs about his voyage through Europe to Africa, surviving on dumpster surplus, wild edibles, and the kindness of strangers he meets along the way.

Over the past year and a half, 31-year-old Ibby Okinyi has been living and walking through Europe, without spending a dime. From Oslo, Norway, he’s walked over 1,600 miles with just a backpack on his back. He’s made his way through Denmark, Germany, Holland, Belgium, France and into Spain, where he’s currently staying for a few days in Basque country.

Although it may take another year, at least, Okinyi doesn’t plan to stop walking until he reaches Morocco, Africa.

“So I’ve done everything in reverse, it would be the same as you crossing over to Mexico from where you are, you know people generally try to gear themselves to be rich, I've tried to make myself poor,” says Okinyi, who was born and raised in Australia to a Kenyan father and an Italian mother.

Blogging as he goes, Okinyi only uses public transportation when absolutely necessary—like the ferry (his passage a gift from the captain who heard his story) that took him from from Sweden to Denmark. He fuels his journey frugaly, eating only when he is hungry: berries and fruit from the wild, and the consistent surplus of perfectly good food he finds in dumpsters all across Europe. He also relies on the hospitlity of strangers.

“Now I try my best not to trade but rather to give freely and receive,” says Okinyi. “And I try to be as helpful as I can in the situation that I'm in,” he says.

If it wasn’t for Okinyi’s easy, all-inviting smile, the brave man might not have made it as far as he has with just a sleeping bag, a tent, and a backpack with some clothes.

On the day that I interview Okinyi via Skype, he’s found warmth in a light green living room in Bordeaux, France, where he’ll stay the night, happy to not have to pitch his tent in the snow. He has eaten tomato soup cooked by his host, and in return he’s helped with some house cleaning. Okinyi is passionate about his trip, and his discovery that traveling with a “divorce from money” has actually made his experience richer, more authentic.

“If I use money I can be lazy, you know I can get someone to cook for me, or I can maybe kind of buy a friendship more, whereas I really have to try my best to use other qualities of myself,” he says.

Before he started blogging, Okinyi had a habit of writing his thoughts on paper and giving them to the people he meets. In France, he made friends with fellow musicians and formed the band Castrated Bluff Orchestra, and producing an album, Even Even is Odd by playing one song a day for seven days.

“The adventures don't stop. Because I think when I've travelled with more finances it put a buffer in between me and the community. Now I don't have anything, I'm directly involved. Possessions can do that in general,” he says.

Okinyi is getting slower and slower as his trip progresses. He sometimes walks just a few miles before he finds himself seduced by the scenery or the people, and sticking around for a few days.

But the moneyless journey is more than just an adventure of his youth, the idea for which sprouted in a pub while his friends bantered about who would pay the tab, and Okinyi challenged them that it’s possible to live without money—a bold profession of which he is now living proof.

The peripatetic journey is also a political statement in which Okinyi seeks to locate and emphasize the true connection between human beings, one that knows no borders of class, nation or race. He quotes Einstein: “Nationalism is an infantile disease, it's the measles of mankind."

Okinyi believes whole heartedly that people should not judge eachother based on “fake constructions” like borders and nationality, but as humans, the sum of all that each has lived. Hardly a hypocrite, he burned both his Italian and Australian passports last October in Holland. A friend filmed the burning, in which he says “I am my own country… I’m a human being, not European, not African, not Chinese…” and later tells the police officers who stamp out the blazing passport “I love you,” to which one replies the same.

“To carry it I would have had to teach myself to carry more unjustified prejudice which would have been even more difficult. To retain both my passport and frame of mind would be like entering a forested area to enjoy and examine wild grasses whilst lugging around a cement mixer just in case,” he wrote in his blog.

The walking activist also spent three weeks in Brussels’ Immigration Detention Center “127bis,” after asking to enter and wish everyone a Happy Christmas last year. It was a premeditated action, his lack of papers landing him a cell. He later contributed his experience inside the detention center to an online collection, at Getting The Voice Out.

If he has fear, it’s more about how he’ll survive the freezing temperatures of the European winter, and less about the authorities or the humans he might stumble across late at night in the alleyways or parks.

“I think humans are just mirrors of who we are. Where I found it hard to get by has been when I haven't been on top of my game.” he says. “I've been very lucky, and I haven't had any problems and I've just been received really well. And it's comforting actually, I find that the world and humans are a lot better than we're made out to be. I think there's a lot of propaganda going around, and people who are scared generally put up a defense mechanism, and they're the people that may be more destructive,” says Okinyi. 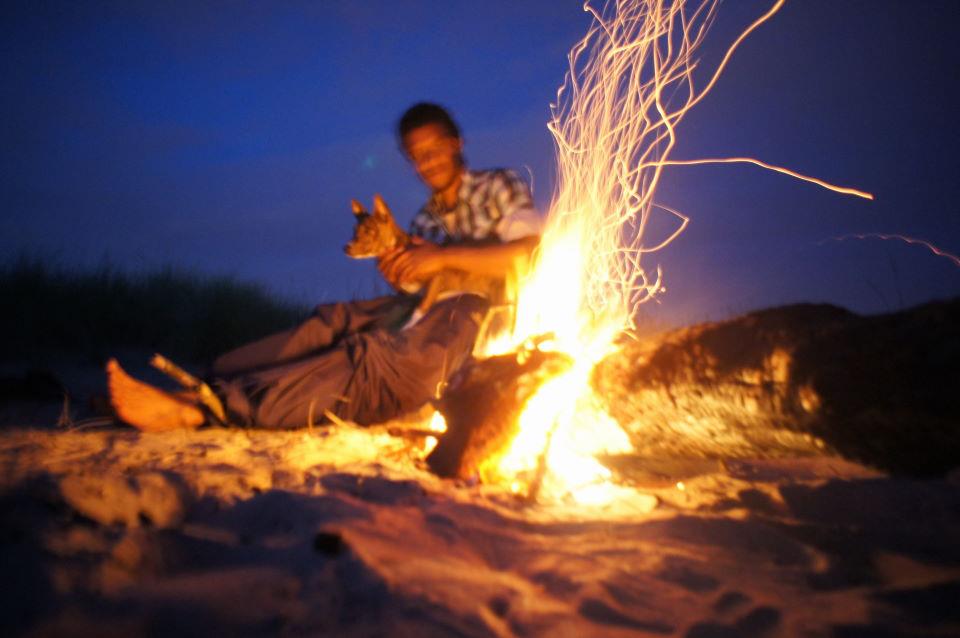 As Okinyi walks on, optimistic and beaming, he does not know what he’ll do, exactly, once he reaches Africa, and he does not yet know what kind of trouble he may encounter getting into Morocco. He dreams of being able to travel with nothing at all, and thinks he might give away the rest of his stuff once he reaches the warmer climate of Africa.

His prolific and passionate blog entries will someday be compiled into a book, at the core of which will lie this certainty: humankind is inherently good.

“I believe the world's going to progress, I believe in that a lot,” says Okinyi.