The Ritual of Critical Mass - Shareable
Skip to content 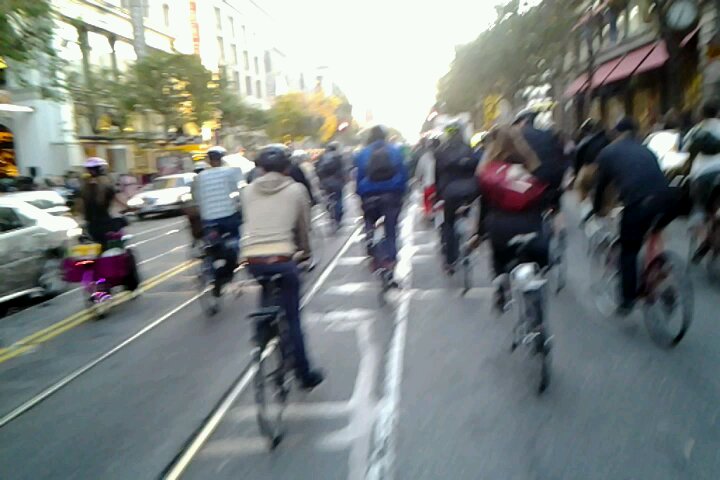 Every last Friday of the month there's a mass, a Critical Mass that is — the self-organized bicycle happening that momentarily reclaims the streets of San Francisco for bicyclists and pedestrians. Last Friday, I partook in the mass. I felt it a fitting experience for my Year of Living Shareably life experiment, so I showed up at 5:00pm at Justin Herman Plaza in downtown San Francisco, the birthplace of an event that happens in over 300 cities each month, to participate. Below is a photo essay of my experience, step-by-step.

Reflecting about my ride afterward, I was reminded of the Catholic masses of my childhood, which are undoubtedly the same today — ornately constructed of ritual, an ancient repeated pattern that engages the faithful and unites them in a shared experience across time and space. At one point I got caught up in the spirit of the ride the way the faithful might during mass. I found myself, for the first time, bicycling down Market Street without the fear of being killed, and more than that, I was enjoying myself among many others who were celebrating the ride with beer, music, yelps, laughter, and even bubbles. We seemed to say to the world, "machines and corporations, you can not crush our spirit, you will not deny us our humanity, we take this street if only for an hour to defy you and enjoy ourselves fully!"

The many onlookers along the way seemed to get that. They cheered us on and photographed the motley parade which included a naked dude with a black bow tie, a hipster in a Kermit the Frog hoodie, the guy next to me with a yellow cardboard Hummer on his bike helmet that said "Dummer", a burner who rigged her bike with bubble machine, and just plain working folk on their bikes. There was a childlike silliness about the experience that delights and recommends it. I now understand something about how Critical Mass became a global phenomenon, how it draws people in with pleasure and spectacle, and how it can be an accessible conversion experience showing the curious like me what it's like to assert their power on one of the most common of commons – the street – and birth in them the desire to have that communion more than just a few hours a month.

And so I've taken another step in my meandering, self-directed course of deprogramming from the cult of consumerism. Maybe, just maybe, a citizen, a human being is emerging. If so, Critical Mass was one of the baptisms. [slideshow]