The Next System Project: Can We Imagine a Future Worth Fighting For? - Shareable
Skip to content 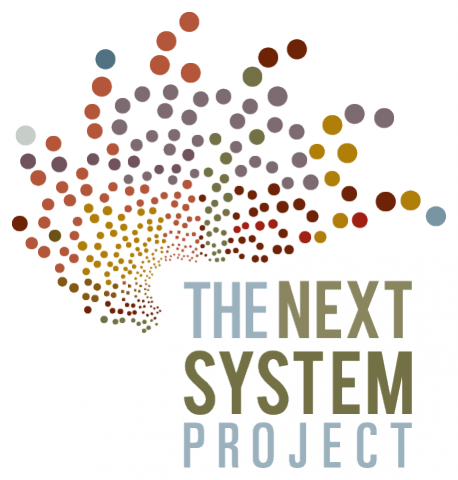 We know that we have big problems: The climate situation is dire, inequality is on the rise, democracy’s been captured by corporations, and we have unprecedented numbers of people locked up in prisons and jails. When we try to chip away at these problems, what often happens is that we take one step forward and two steps back. We try to crack down on predatory mortgage lending with some new regulations and speculative finance decides to just become corporate landlords. We try to make the prison system “more fair” and we wind up just making it bigger. We try to build a sharing economy that connects people and reduces the resources we use, but the venture capitalists jump in to inflate another tech bubble that pushes more people into precarious labor instead.

If we’re serious about a future that’s sustainable, equitable, livable, and just, we need to be thinking in terms of getting ahead of these dynamics by actually changing the system. That means thinking seriously about scale, about the big picture, about how the elements of the world we want to live in fit together and can mutually reinforce each other. It means sorting through all the great ideas and experiments and visions that have emerged in recent years — from peer production to worker cooperatives to basic income to prison abolition — and figuring out how these visions get made real and how these experiments get scaled up.

And it means coming to terms with the magnitude of all of this. We aren’t going to build the system we want to see overnight; it’s going to take decades of work and millions of people to pull it off.

The good news is that this work is happening already, all around the country and the world. Angela Glover Blackwell, the head of PolicyLink, puts it beautifully: “As systems fail, individual and community creativity explodes […] the people in this country are solving the problems themselves. They're coming up with new models and strategies, and within those models and strategies are the kernels of a systemic way to move forward.”

The Next System Project, launched last week at the Democracy Collaborative, is a multi-year initiative to build a platform for weaving these new models and strategies together into something bigger. If this sounds like something you want to be a part of, watch and share our overview video, and visit the Next System Project site to sign on to our statement on the need for systemic solutions to systemic crisis. Here's more on the project by actor and activists Danny Glover:

John Duda started working for the Democracy Collaborative as Communications Coordinator in 2011.  He holds a B.A. in lingustics from the University of Pennsylvania, a Master's degree in Logic from

John Duda started working for the Democracy Collaborative as Communications Coordinator in 2011.  He holds a B.A. in lingustics from the University of Pennsylvania, a Master's degree in Logic from the Universiteit van Amsterdam, and a PhD in Intellectual History from Johns Hopkins University, where his dissertation examined the genealogy of the idea of "self-organization" in politics and the sciences.  He is also a founding collective member at Red Emma's, a worker-owned cooperative bookstore and coffeehouse in Baltimore, and has worked extensively as a digital media activist supporting a variety of grassroots independent media projects.