The Landfill Harmonic: Making Music Out of Trash [Video] - Shareable
Skip to content 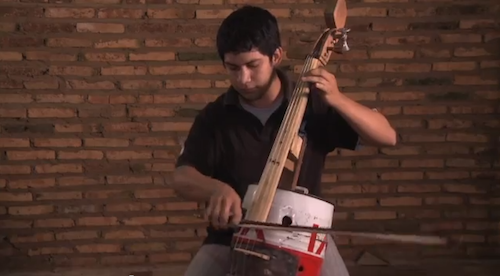 Cateura, Paraguay is a town built on garbage. Located on top of a landfill, its residents make their living recycling and selling items that have been thrown away. Illiteracy rates in the area are high and many turn to drugs and gangs. When local teacher Favio Chavez decided to teach the town’s children to play music using his own instruments, he soon had more students than instruments. The solution? He started teaching the students on instruments upcycled from trash and the Recycled Orchestra was born.

Made up of young people playing homemade instruments—particularly striking is a cello made from an oil can, repurposed wood and a meat tenderizer—the orchestra provides beauty, direction and inspiration to its members and the town’s other residents. There’s a sense of pride that exudes from those who have helped to make the instruments and being able to play music in an area where a violin is worth more than a house has proven to be no less than transformational to the youngsters. As one musician says, “My life would be worthless without music.”

The subject of an upcoming feature-length documentary titled Landfill Harmonic, the Recycled Orchestra has become a darling of the Internet as of late. The trailer for the film has been making the rounds, illuminating the resourcefulness and innovation that humans are capable of and challenging us to rethink our disposable culture. It also serves to remind us that every person has something to offer when given an opportunity. As Chavez says, “We shouldn’t throw away trash needlessly. Well, we shouldn’t throw away people either.”