The Commons Have Come to Town - Shareable
Skip to content

Article and images cross-posted from CommonsTransitions.org.

Victorious in seven major cities throughout the country, including the three largest ones (Madrid, Barcelona, and Valencia), these coalitions open the door to a different sort of transition, questioning the dominant political culture and mentality, and in most cases putting in place minority governments, thus obliging various parties to negotiate joint platforms. It is interesting to note that Podemos, the young political party that made a surprise showing in the 2014 European elections and made strong gains on the regional level this year, decided not to present its own candidates in the municipal elections, but rather participated in or — more frequently — supported the new citizen coalitions in various cities.

These newcomers to the municipal political scene identify with the Commons, and in some cases even include the term in their names: Barcelona en Comù, Zaragoza en Común… A perusal of their programmes and of the manner in which they were developed demonstrates that this is not simply an empty phrase, but the reference to the Commons introduces instead a new political discourse and horizon and, above all, a new way of ‘doing’ politics.

The new candidates-elect come from different social movements and this is their first experience in electoral politics. Their "non-parties" are, in general, less than a year old, but the organisations they come from have held massive mobilisations and won significant local victories. On analysis, the new political culture they aim for is rooted in the tradition of urban struggle now revisited and improved on the basis of the citizen movements that originated in the 2008 financial crisis, the indignados of 2011, and the successive waves (mareas) that followed in the housing, health, education, culture, and urban ecology sectors.

The tradition of self-management and "self-government" often rooted in libertarianism and long known as "municipalism" has been revisited by the culture and practices of the many anti-growth, ecological, alter-globalisation, and cultural movements inspired by the spirit of the Indignados of 2011 with an impressive mastery and intelligent use of new technologies and audiovisual media. 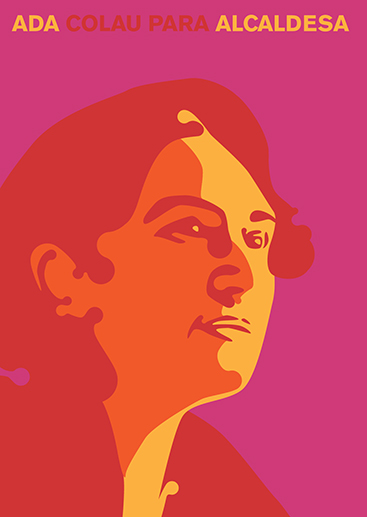 The challenges facing this new municipalism are enormous: The problems are illustrated by the findings of two international reports revealed immediately following the May 24 elections. The first [1] underlined the explosion of the level of poverty since the beginning of the crisis (increase from 9 percent to 18 percent) while the second [2] demonstrated an increase of 40 percent of the number of extremely rich during the same period. Adding to the general morosity by reiterating prevailing logic, the IMF seized the occasion, shortly prior to the investiture of the new municipal governments, to congratulate the Spanish government on its "encouraging" economic results while publicly reminding it that it must continue its austerity measures by increasing indirect taxes, cutting health and education budgets still more and lowering wages. What else could be expected from the fans of austerity?

THE RE-DIGNIFIED GOOD LIFE IN COMMON

But such dire pronouncements do not scathe the confidence of the new mayors whose campaigns were run and programmes built on an anti-austerity stance; they are already putting in place (Barcelona is a good example.) some of the measures set out in their plan of attack for affordable housing, food, accessible public utilities and transportation, and a basic living allowance. They are dedicating an unprecedented quantity of resources for municipal governments to these measures in an explicit attempt to counter the "de-humanising" effects of austerity policies and to "restore the dignity" of the most vulnerable.

But the declared intentions of the new municipal leaders go far beyond the emergency measures of the first few months of their term. They want to turn their cities into living experiments in promoting an urban Good Life that redefines economic and social policy and municipal responsibilities as well as democratic practices on the municipal but also the regional, national and international levels. In her inaugural speech as Mayor of Barcelona, Ada Colau called for the creation of a "network of democratic cities in Southern Europe."

This incipient revolution in political culture and practice is taking place with total transparency, with the creation of a code of ethics, cutting the salaries of the elected representatives, and eliminating statutory perks (official cars, per diems, etc), and, above all, by wagering on the collective intelligence and active participation of local citizens. Indeed, many of them have already taken part in the municipal programme by contributing to its elaboration prior to and during the campaign in the many neighbourhood meetings and various ‘crowd-sourcing’ moments on virtual platforms.

The resulting highly structured programme remains an open document and is in itself an invitation to participate. The web page of Barcelona en Comù boldly states: "The programme you have before you is a programme In Common and, as you can see, that requires a major change from traditional political programmes […] it’s a document that aims to be useful to dialogue amongst citizens." [3]

During her inauguration ceremony, Ada Colau asserted that "it is indispensable to create a new form of governance," reminding the crowd that she is but "one of thousands of neighbours," that she plans to "govern by obeying," and that if she and her team do not deliver on their programme promises, "Kick us out!"

The thousands of people watching the ceremony on giant screens in Plaza Sant Jaume greeted her speech with shouts of "Yes we can!" (Sí se puede!), echoing the slogans of the public meetings held throughout the campaign. In a crowd so dense that she could hardly make her way through, but clearly at ease surrounded by neighbours, comrades, and partisans, Ada slipped into the discourse and manner of the ex-president and activist of the PAH [4].

With her charming smile, she declared to the enthusiastic crowd that "governing will not be easy, but we are not alone" and called on them to show responsibility and to actively participate. She concluded evoking the need for empathy and invited the crowd to organise a demonstration in support of the striking telephone workers of Movistar, present in the crowd, and whose struggle she has supported throughout the campaign. The tone has been set, and indicates that it is not only the Commons but also the spirit of the Indignados movement that has come to City Hall. 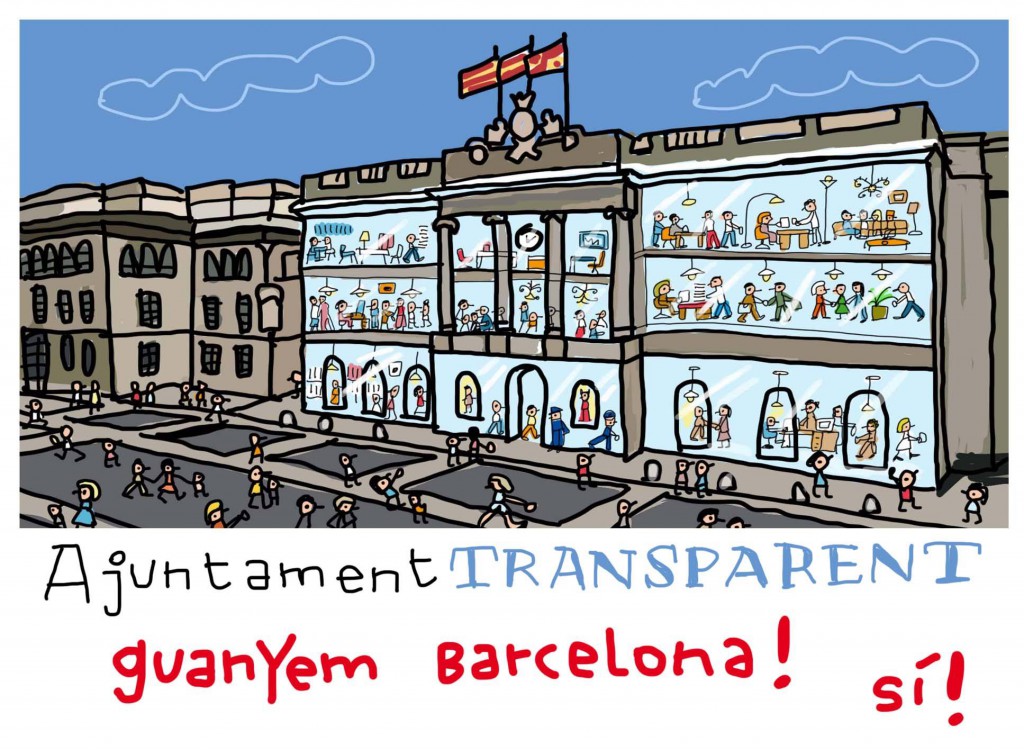 THE REALISM OF THE COMMONS

In an article titled "It’s Time for Realism," Josep Ramoneda, columnist for the catalán daily Ara, compared the proposals of Barcelona en Comù to the latest demands of the IMF, demonstrating that the "nihilist utopias" — a label often used by the media and the governing right wing PP party to denigrate progressive alternatives — are instead found in the proposals of the neoliberal hardliners, incapable as they have shown themselves to be of finding a solution to the economic crisis and deepening inequality. He concludes by affirming "Let’s be realistic. Let us consider the common good," [5] a somewhat astonishing comment in this newspaper reputed to be more interested in supporting independence than the Commons. A comment that also reveals that the Commons have come not only to Town Hall, but are emerging in the collective imagination and in political discourse.

A LIVING LABORATORY, AN INVITATION TO COMMONING

The emerging glocal movement of commoners and their apprentices should observe closely what transpires in this living laboratory of the urban Commons. There is a lot to learn from this Commons in action about the nature of the Commons, the process of commoning and the possible transition to a commons society. This is also a unique opportunity to contribute peer-to-peer with our own experiences and know-how, developed all over the globe in the many different socio-cultural contexts where the Commons are being reinvented in recent years.

Originally published in Remix the Commons

The Commons Transition Platform is a database of practical experiences and policy proposals aimed toward achieving a more humane and environmentally grounded mode of societal organization. Basing a civil society on

The Commons Transition Platform is a database of practical experiences and policy proposals aimed toward achieving a more humane and environmentally grounded mode of societal organization. Basing a civil society on the Commons (including the collaborative stewardship of our shared resources) would enable a more egalitarian, just, and environmentally stable society.

The proposals in this web platform go beyond rhetoric and are inspired by successful, self-organized working communities that maintain themselves and their environments through Commons Based Peer Production, Property and Governance.

The Commons, together with Peer to Peer dynamics, represent a third mode of societal organization that evolves away from the competitive Market State and obsolete, centrally-planned systems. It is a system based on the practices and needs of civil society and the environment it inhabits at the local, regional, national and global levels.