The Best Rule for Collaboration - Shareable
Skip to content 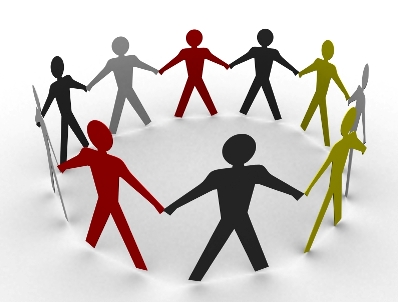 You don’t have to be religious to have a deep faith in the power of compassion. With it people who act and believe differently can not only work and live together in harmony they can enjoy a richer, more adventuresome life.

They can collaborate. They can accomplish greater things together than they could if they just share time with people like them. And they’d be much less likely to kill each other.

“It doesn’t really matter what you believe as long as it leads you to practical compassion.”  ~ Karen Armstrong

In fact, the more diverse a community, group or team the greater the likelihood that misunderstanding and conflict will happen.

“We are living cheek by jowl with people of other faiths, our world has shrunk to a global village…for a long time and in a most unsung way people have been spontaneously  reaching out to other faiths. More Christians read Martin Buber than Jews. Jews read Paul Tillich and Harvey Cox. And Jesuits have long been learning meditation from Buddhist monks.” ~ Karen Armstrong

Yet, when friction happens, if individuals look to each other’s positive intent, listen fully and speak candidly, they are most likely to experience breakthroughs – both personally and collectively. That shared experience enables everyone to feel safer in the group.

We spiral up to greater trust, bring out the best in each other, creating a mutually-reinforcing behavioral loop that enables us to become happier and higher-performing together. That’s when the Golden Rule happens naturally.

Yet that rarely happens.  Even more difficult than defending oneself or attacking others, facing another with compassion takes “stepping into their shoes” practice.

“The act of compassion begins with full attention, just as rapport does. You have to really see the person. If you see the person, then naturally, empathy arises. If you tune into the other person, you feel with them. If empathy arises, and if that person is in dire need, then empathic concern can come. You want to help them, and then that begins a compassionate act. So I’d say that compassion begins with attention.” ~ Daniel Goleman

That’s why TED talk speaker, Karen Armstrong asked, as her wish, for support in spreading the idea of the Charter for Compassion, and the collective practice of its central tenet.  That is “the core shared value of every world religion and moral code, the Golden Rule.” After all, “TED is about ideas worth spreading — please help us spread compassion, ‘the best idea humanity has ever had.’”

My version of the Golden Rule is to do unto others as they would have done to them. Would you join us in this global conversation and in sharing the charter with others? I’ve started by:

•  Watching six people share their insights on compassion – an inman, a rabbi, a tenzin, a swami, a reverend and some with a secular voice of compassion.

• Learning about the activities funded by the Fetzer Institute, a partner in this campaign.

Imagine my delight in discovering that Fetzer sponsored a conference at which Daniel Siegel spoke on "From Me to We: A New Look at Resilience and Well-Being" – an inadvertent take-off on the title of my blog, Moving From Me to We.

"The Golden Rule is of no use to you whatever unless you realize it is your move.” ~ Frank Crane

Kare speaks and consults on connective communication, collaboration, credibility and quotability â€“ key traits in this ever more connected age. This Emmy-winning former NBC and Wall Street Journal reporter was

Kare speaks and consults on connective communication, collaboration, credibility and quotability â€“ key traits in this ever more connected age. This Emmy-winning former NBC and Wall Street Journal reporter was the Obama campaign's Team Collaboration Director. â€¢ Voted one of Top 5 speakers on Communication: https://speaking.com/top5/ â€¢ See how much others have accomplished in consulting with Kare https://www.sayitbetter.com/coaching.php - or bring her to speak https://www.sayitbetter.com/meeting_planners.php â€¢ Two of her blogs are featured on Alltopâ€™s Collaboration page: https://collaboration.alltop.com/ https://www.movingfrommetowe.com https://howwepartner.com/ https://sayitbetter.typepad.com/say_it_better https://www.linkedin.com/in/kareanderson https://twitter.com/KareAnderson

Things I share: Method by which others can profitably partner Scull Tall ladder