Space and Sharing at the Prelinger Library - Shareable
Skip to content 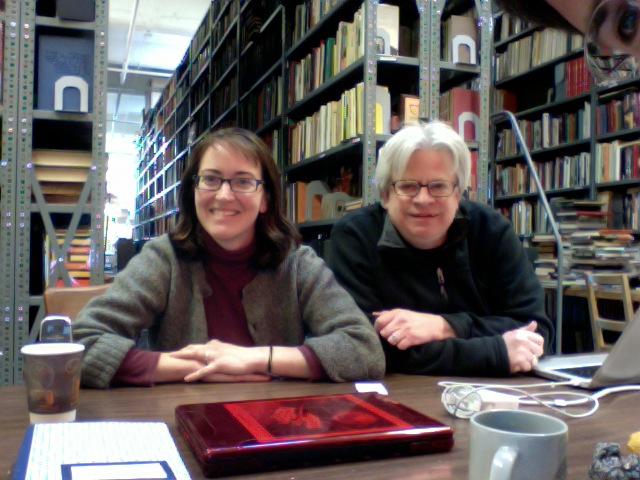 I'm working this afternoon at the Prelinger Library. Rick and Megan Shaw Prelinger (that's them up above) founded the library in 2004, mainly as a way to share their collection of 40,000 books, periodicals, printed ephemera, and government documents.

“We were interested in experimenting with alternative access to cultural resources,” says Megan, an independent scholar whose history on advertising in the space age will be published in May 2010 by Blast Books. “We wanted to start a library that would support our work as researchers and archivists, but we wanted it to be open to everybody.”

Today, they have a highly idiosyncratic, iconoclastic physical space at 8th and Folsom in San Francisco as well as almost 4,000 scanned items in a digital archive, much of it licensed under Creative Commons.

“The library is organized as geo-spatial taxonomy that starts in San Francisco and wends its way to space history and science fiction, from concrete to mediated to abstract groups of subjects,” says Megan.

Rick (a film and media archivist who founded the Prelinger Film Archive in 1983, which is now part of the Library of Congress) says that sharing their moving image collection for free online has actually boosted their income as archivists, by expanding their web of contacts willing to pay for high-quality material. (The library itself is totally free.)

The library is open every Wednesday and most Sundays, and their pool of visitors remains small and specialized. “We have about 1,000 visitors a year, 50 of whom are regulars," he says. "We know about a quarter of people who come. Many of them are librarians, media activists, 'zine makers, designers, writers, and so on, lots of people looking for imagery or text to reuse."

The library is an act of sharing that catalyzes sharing among their cadre of visitors. “What we’ve discovered with the library is a shift from repository to workshop," says Rick. "When you open up a collection to people it becomes a place for cross-fertilization to happen, mainly between literary and visual artists. That’s an interesting vector of cultural institutions to explore.”