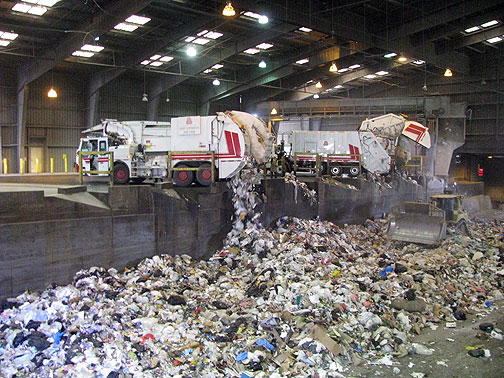 Over at the wonderful Streetsblog, Shareable friend Chris Carlsson reminds us that curbside recycling was once considered a wacky, far-out idea. "We tend to take curbside recycling for granted," writes Chris. "It seems like common sense, and these days the ubiquitous three bins are everywhere: black for landfill, blue for recyclables, and most recently green for compost. But only a few decades ago it was 'crazy hippie activists' who started the process of bringing our trash out of the dark and into the light of day."

Chris recalls the first recycling programs were small-scale, grassroots efforts run by small groups of activists, such as the Ecology Center in Berkeley, California. As one of those activists, Karen Pickett, recalls:

Back around 1980 or so, recycling was not institutionalized the way that it is now, and it was actually a pretty radical concept to think that garbage was something good. So the public education that was going on around solid waste issues, recycling issues, really felt cutting edge… What sucked me in was the recycling program that the Berkeley Ecology Center started. I [worked on] the curbside program, only picking up newspapers. There was no formal contract with the City of Berkeley, it was a nonprofit running around throwing newspapers into the back of a truck, and we took them down to Ashby and San Pablo, to the Packaging Company of America. They turned the newspapers into egg cartons and fruit dividers. It was a terrific example of local industry because at the end of the day we’d go a mile or less.

You reduce, reuse, recycle. But you ALWAYS reduce first, because it has to do with consumption habits. We have to recycle because we’ve used up the raw materials, the resources, to produce these products… I hate to say this, but in a lot of ways it’s a failure. That’s not to say that all of people’s efforts all of these years has failed, because all these municipalities, county entities, are recycling. By and large, people across the country can do curbside recycling in a convenient way which most people see as a success. To ignore [that] would be foolish. Nonetheless, where does it get us if we’re recycling all this stuff but we haven’t reduced how much we consume? We’re still on a suicidal path.

We worked for so very long at getting people to see the value in touching their garbage and separating things, and the whole idea that if they participated in that process in that way, then things would be re-used in the highest and best use kind of way. And that was the whole reason we separated colors of glass, never mind the glass from cans. And now the irony is, now that it has been institutionalized and it’s so acceptable that everybody is recycling, everything is thrown into the same bin. It breaks my heart every time I do my own recycling and dump my stuff into a recycling bin and see what else is in there, because I know that things are lost in the process.

Shareable.net exists to propose a simple idea, that sharing is a solution to social, economic, technological, and, most of all, environmental problems–that we can reduce without sacrificing our quality of life by simply sharing more of our stuff.

Some folks, I know, look at this site and think we're a bunch of "crazy hippie activists," and many of the projects we profile are just as small and halting as the incipient recycling program that Pickett describes. Yet groups like the Berkeley Ecology Center pioneered programs that were later funded and scaled up by city and state governments around the world, and is now an absolutely taken-for-granted, common-sensical part of urban life, not to mention a multi-billion dollar industry.

Similarly, I don't think it's far-fetched to believe that projects like the Share Exchange in Santa Rosa, California, might serve as experimental templates for an entire, better way of life. "Never doubt that a small group of thoughtful, committed, citizens can change the world," said Margaret Mead. "Indeed, it is the only thing that ever has."