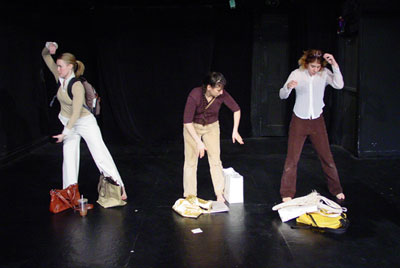 After two months, 41 sharing stories, 1,158 votes, and an intense round of judging, the results of our Share or Die Storytelling Contest are in.

The second prize in the writing category went to artist Jen Abrams who, by staging performances with the help of others, learned the difference between sharing and Sharing.

Check our contest story channel for more stories and our book, Share or Die, for an even bigger collection of stories about sharing.

When I arrived in NYC almost 14 years ago, I was a performance-maker, I was broke, and I was queer. That meant that one of my first ports of call was the legendary WOW Café Theater.

WOW is a collectively run, women and trans theater space on New York City’s Lower East Side. We work on a “sweat equity” system. That means that we put in time helping others produce their artistic visions and, in return, we earn the right to produce our own visions in the space, and be supported by the other members.

I’m a Type A person, so this kind of sharing wasn’t necessarily intuitive for me. There are a lot of undefined boundaries, a lot of unknowns, and that’s not an easy fit for me. But as a young performance-maker, the resources WOW offered were valuable enough for me to try it out.

My comfort level with sharing grew in hundreds of small ways during my first year at WOW. By sweating with these women — building sets for them, distributing promo postcards for them, collecting their money at the door, whatever it took — I got a lot of work done and earned a lot of equity. What I didn’t realize at the time was the value of the relationships I was creating.

That became clear to me about two years into my time at WOW.

I was doing my second show at WOW. I was in the middle of my load-in. That’s the day when you construct your set, hang your lights, arrange the seating, and generally get the space ready to perform your show. It’s a HUGE task, and the to-do list I posted on the wall was LONG. There were nine women in the theater, there for the sole purpose of supporting my show. The vibe was amazing. The music was great. We were dancing and laughing and painting and hanging lights.

And then I got sick. Whether it was something I ate or terror of the sheer enormity of the task, I can’t say; but I was suddenly and violently ill.

Disaster! There was a full day of work to do and nine women waiting for instruction from me, and I was incapacitated and sitting out on the fire escape.

One woman spent two hours with me out on the fire escape. She got me water, she held my hair out of my face, she talked to me quietly.

Eight women stayed in the theater and hung my lights. Eight women painted my set, arranged the risers, plugged in the sound equipment. Eight women checked items off that list on the wall, one by one.

Two hours later, I felt a little better and came back into the theater to find that we were right on schedule. The sound worked. The lights were almost done. Dozens of tasks were checked off the list.

Nine women welcomed me back to the music and the dancing and the laughing. There was no disaster at all.

Several of those women are still my closest friends. They’ll be aunties to my child someday. If I were ever hit by a car, those women would show up at the hospital right behind my parents and my wife.

On the strength of that experience, I co-founded OurGoods, a barter network for creative people. And I still make my artistic work at WOW to this day. I plan never to stop.

I don’t know much for certain, but I do know this: I will share, and Share, for the rest of my time on this earth. How could I not?

Jen is a choreographer and performance-maker with a background in arts administration. Jen works on the public side of OurGoods: building awareness of the site, partnering with other non-profits, being

Jen is a choreographer and performance-maker with a background in arts administration. Jen works on the public side of OurGoods: building awareness of the site, partnering with other non-profits, being an ambassador for resource-sharing in the creative community, and raising the money. She thinks a lot about building a positive and productive environment on OurGoods, and about how to help people make resource sharing a part of their lives. She is most interested in making OurGoods a viable, dynamic resource for getting creative projects done. She is less funny than Rich. For the last thirteen years, Jen has been part of WOW Cafe Theater, a collectively-run theater space for women and transpeople. WOW has run on a barter/gift economy since its founding in 1980. WOW is part of Fourth Arts Block, which facilitates resource sharing within the East 4th Street Cultural District. She is an advocate for resource sharing in the NYC downtown dance community, and in her neighborhood of Prospect Heights, Brooklyn. Jen is a skilled institutional and individual fundraiser, with a background in strategic planning for and management of small and founder-led non-profits. She has managed small non-profits since 1994. For more information on Jen’s performance work, go to www.jenabrams.org.