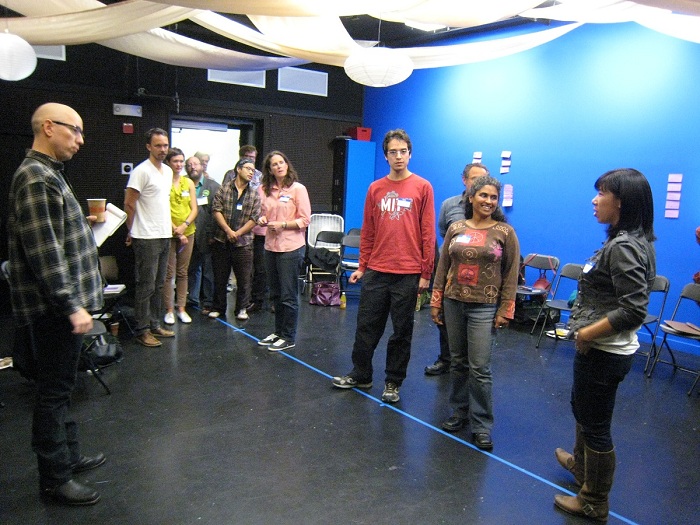 Last Friday, July 27, members of Shareable’s community of readers, writers, commenters, and sharers in the San Francisco Bay Area spent the entire afternoon giving us fantastic feedback about how Shareable can better serve the sharing movement.

Asking the Questions to Help Spread the Sharing Movement

The event used a participant-driven agenda in which participants told us what was important to talk about. The overarching theme was how to use Shareable to educate people and get them connected and engaged online and offline. The feedback was focused around three questions that are listed in the next three sections.

Participants in the content priorities session had helpful guidance:

Want to see more details? Here are the raw notes from the content session.

The offline community engagement session had twice as many attendees as the other two sessions, which shows that there is an interest in more offline engagement among Shareable users. The group had many ideas which they distilled into four great suggestions:

As Kenn pointed out, these ideas for community and neighborhood engagement shouldn’t use a top-down model, but would instead come from communities themselves. Alpha added that Shareable’s role would be to facilitate different demographics and people to do whatever they most want, and to help get it all publicized.

Want to read more? These are the raw notes from the offline community session.

How Can Shareable Enable Users to Better Collaborate on the Website?

The online collaboration group said that it’s easy to have people discuss online, but that Shareable should consider other ways for people to engage online. Participants in the session came up with recommendations for how to connect people online, get users to try different types of sharing, and to meet up offline.

Eric asked how we engage people who aren’t familiar with sharing so that we’re not just preaching to the choir. He mentioned the group’s “Sharing Sherpa” idea for one-on-one online chats with volunteer guides; these would pop up on the website and the guides would help out new users who are getting started with sharing.

Want to dive deeper? Here are raw notes from the online collaboration session.

In an effort to engage you, our community, in shaping the future of Shareable, we'd like to continue to solicit your feedback by hosting online meetings for those of you who couldn't join us in person.

Next week, Shareable will hold two online meetings to discuss the feedback we received at Friday’s San Francisco event and gather additional input from those of you—readers, writers, commenters, and sharers—in other parts of the world. The two meetings will have the same format but are scheduled to better reach people in different time zones. The meetings will last for one hour. We’re finalizing the details, so please keep an eye on this website for more details.

If you’re interested you can also review the full notes from the event.

What Do You Think?

Please share your feedback in the comments. Which ideas make the most sense to you? Do you have other ideas to share? [slideshow]

Thanks to Milicent Johnson and Neal Gorenflo for their notetaking and collaboration on this article.