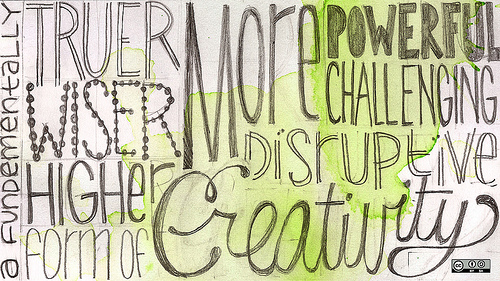 When the economy tanked, both existing jobs and the promise of creating more faded with it. Thousands of people with "job security" were laid off only to find that companies weren't hiring, or weren't willing to pay for their 15 years of experience.

So the workforce got creative. Those who had been harboring secret hatred for their cubicles decided to look on the bright side. They jumped off the corporate ladder willingly. Many gathered up their talent and their networks, and went into business for themselves. After all, if your future's going to be uncertain, shouldn't you at least get to hold the reins?

According to the most recent BLS data, between 8-10 percent of all working men and women in the U.S. are self-employed. Although big corporations usually garner all the praise for job creation, new research shows that it's actually these freelancers, contract workers, and self-starting entrepreneurs who are making a difference in small local economies.

A study by Stephan Goetz, professor of agricultural economics and regional economics at Penn State, found that the number of self-employed workers in nonmetro American counties significantly predicted personal income and job growth, as well as declines in family poverty levels.

“We often look at self-employment as a stopgap measure, something done out of desperation,” Goetz says. “But, in fact, self-employment has a tangible effect in raising income growth and lowering poverty.”

During his research, Goetz, along with associate Anil Rupasingha, examined statistics from the Bureau of Economic Analysis on self-employed rates in 3,000 metro and nonmetro counties. They found that between 1969 and 2009, the number of the self-employed in nonmetro areas has risen from 2.9 million to 5.6 million, an increase of 93 percent. When analyzed in relation to economic trends over the past few decades, it was discovered that self-employment helped drive positive growth in these communities.

Of course, self-employment isn't completely fail-proof. Just like brick and mortar businesses, the self-employed depend on demand for their goods or services, and can be affected by economic downturns, though not as severely.

That's why coworking spaces, especially in rural areas, are so important. Yes, as Goetz found, self-employment can revitalize and empower local economies. But who empowers and supports the self-employed? The global coworking community, that's who.

Goetz says to encourage growth, leaders should help the self-employed by organizing networking meetings and alerting them to exporting opportunities. "Economic development groups also can assist entrepreneurs with credit and grant applications," he explains.

Or, those same government leaders could help plant coworking spaces in their communities. Shared office spaces are the perfect, fertile mix of business incubator, think tank, professional network, therapy group, all rolled into one.

Freelancers and small business owners have been shown to thrive when exposed to the open sharing that occurs in coworking communities, and the coworking spaces themselves are small businesses that can act as lightning rods for innovation and economic growth.

If you're interested in learning more about what coworking can do for self-employed workers in rural areas, check out these Shareable posts:

How To Start A Rural Coworking Community