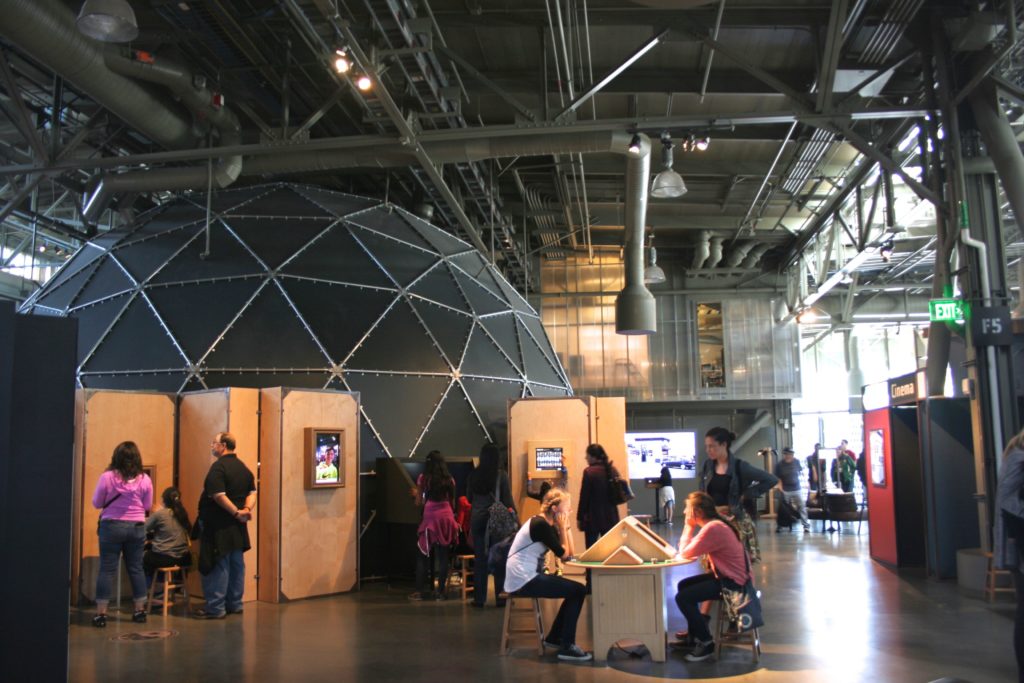 On Pier 15 in San Francisco, inside the famed participatory museum the Exploratorium, a large flat screen displays two bright circles—one red, and one blue. Inside each circle are rapidly increasing numbers; at the bottom of the screen is a timer, counting down. In front of the screen, at four podiums, total strangers frantically press either a blue or a red button, attempting, it seems, to up the count of that color. What are they doing?

A placard between the podiums explains:

“Even randomly formed groups can generate instant rivalries… Here, neither team has a history, but competition can escalate quickly. Scientists have found that even when groups are created randomly, people may quickly favor their own group and see others as threats.”

Ah, that explains it. And rivalries are indeed formed as people hoot and holler and attempt to get passersby to join their team.
Welcome to the Science of Sharing, a recently opened exhibit in which visitors engage in interactive experiences to investigate and explore cooperation, competition, collaboration, and sharing.
The entrance to the Science of Sharing exhibit. Image credit: Nasimeh Bahrayni-Easton
The exhibit opened in November of 2014 and is the culmination of more than two years creating and testing exhibit and activity prototypes. It integrates social science with hands-on activities, experiments with games, and thoughtful questions and lessons about our increasingly populated world with fun, interactive playful learning. It all aims to “prompt investigation of cooperation, competition, and collaborative problem-solving, as well as encourage reflection on the interplay between science, society, and culture.”
Hugh MacDonald, Ph.D., a principal investigator of the exhibit, explains:

“Our goal with Science of Sharing isn’t to tell people how to act. Instead, we want to create experiences that prompt people to reflect on how they make decisions about cooperation and collaboration, to help people learn how scientists study social behavior, and ultimately to raise awareness of links between everyday social interactions and real societal challenges, such as environmental destruction, ecosystem collapse, and climate change.”

One exhibit, for example, features a screen with boats floating over an ocean filled with fish.  Visitors can text numbers on each boat to “fish” in the ocean. Ideally, visitors work together to keep the ocean stable – neither overfished nor overpopulated with fish—but will they? This exhibit explores the “tragedy of the commons,” an economic theory which postulates that when there are commons or common resources, people often act in their own self-interest and thus deplete them. It also, of course, poses the question: will our oceans continue to suffer a similar fate, or will we work together to save them?

A second exhibit explores the commons in a much more tangible way through a "give and take table," in which visitors are asked to take whatever they'd like, provided they replace it with something of equal or greater value. If the bowl is empty or full of trash, the exhibit invites you to ask a very simple question: why? 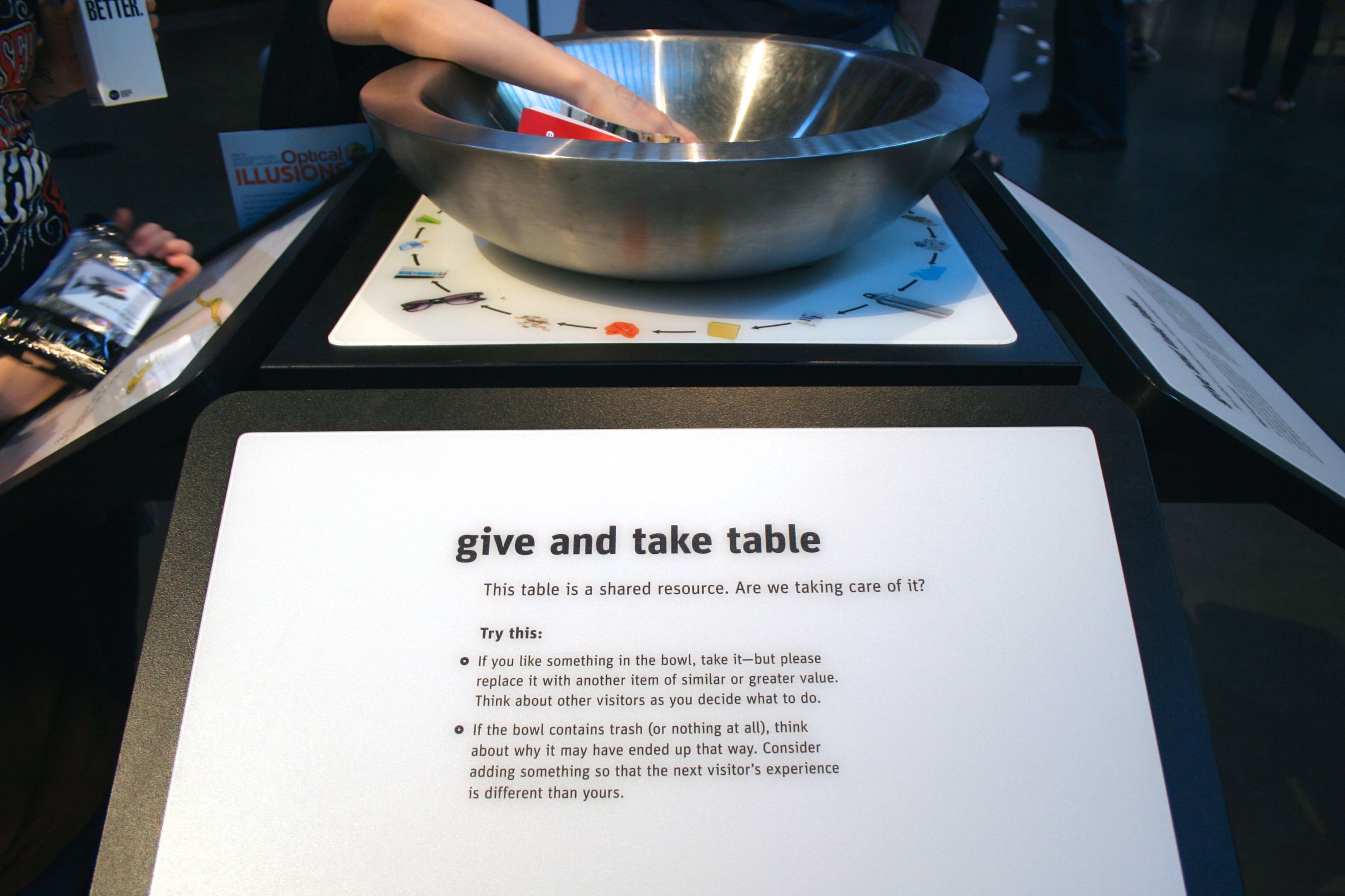 A "shared resource" at the exhibit. Contents included pens, a BART card, and even a banana. Image credit: Nasimeh Bahrayni-Easton

Another exhibit uses what's called "the prisoner's dilemma" to investigate trust, risk-taking, and cooperation. Visitors and their partners sit on two sides of a divide and are led through an imagined scenario in which they have just committed a crime together. They must decide: do you snitch on your partner and thus walk free- but harm your partner in the process? Or do you keep silent, trusting your partner will do the same—while knowing if they don’t, you’re the one taking the fall? And most importantly, what does your choice say about you, your partner, and how you both interact with the world?

Other exhibits focus on emotion, such as one where a double-sided television displays video of people yawning on one side, laughing on the other. The invitation is to sit in the plush armchairs in front of the screen and witness, first-hand, the “contagious” nature of certain emotions. There are also exhibits about perception and stereotypes, gender norms, meaning making, and our all-too-human desire for social acceptance and connectivity. 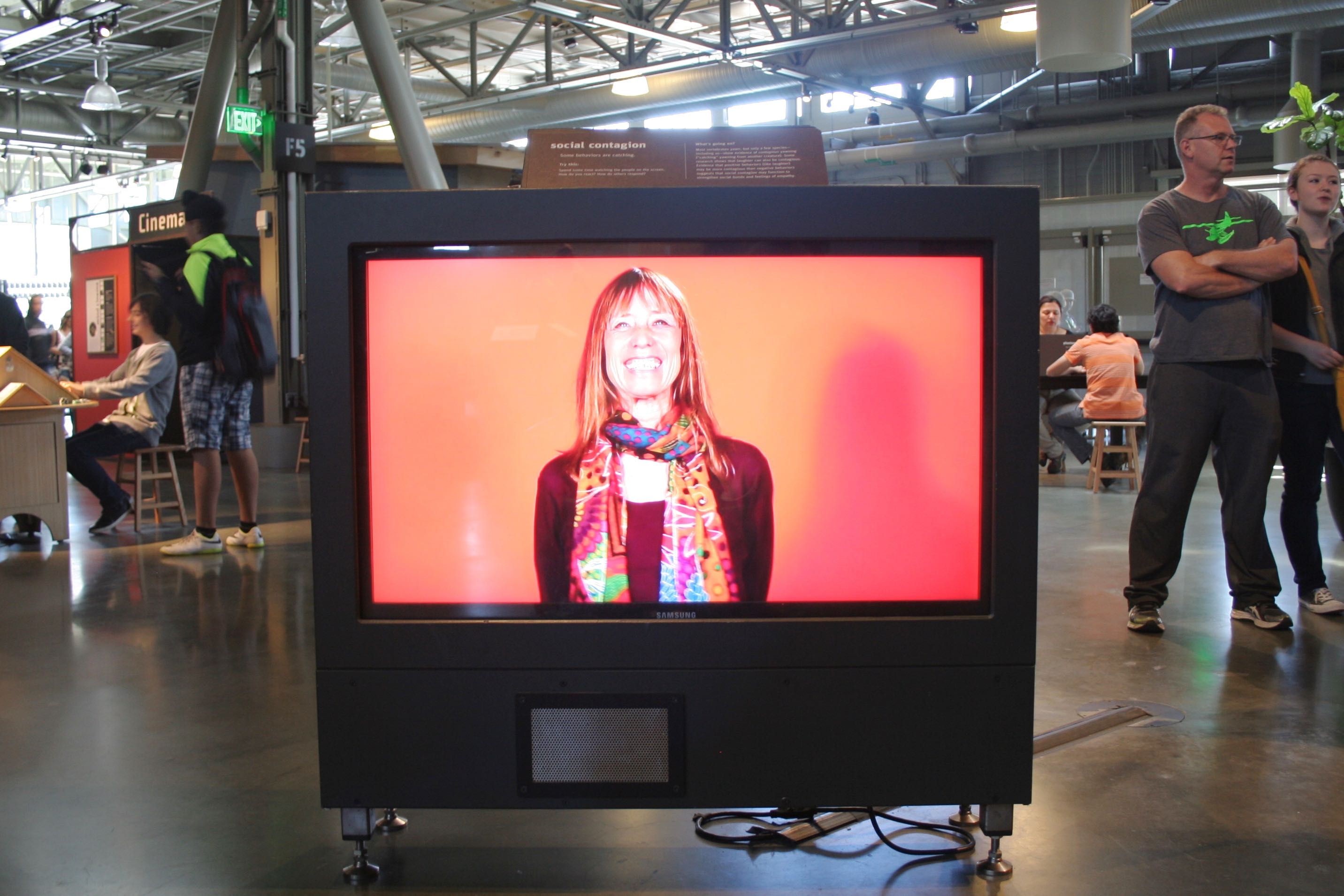 One of the most striking exhibits requests visitors enter one by one. As soon as you step in, bright lights shine directly on you, an audience applauds enthusiastically, and I won’t give any more away. Suffice to say, it effectively, and with great playfulness, explores our desires for love and belonging, and the effects our peers’ responses have on us. And it fits right in with the rest of the exhibit, where touching truths about the human experience coexist gracefully alongside social science, global questions and perspectives, and a solid dose of good old-fashioned play.